Learn How the Netherlands Stays Dry at the Afsluitdijk Wadden Center

Besides the Great Wall of China, the Afsluitdijk is the only man-made structure visible from space. The 32-kilometre-long dam between the provinces of Noord-Holland and Friesland protects a large part of the Netherlands against flooding. For a long time, however, little attention was paid to this technical feat of hydraulic engineering.

Torn off roofs, fishing equipment squashed into balls, beams splintered like matchsticks, undershirts hanging like ghosts in the water, broken chairs and household goods that are nearly impossible to recognize as such. The steamer from Zwolle that sailed up the Zuiderzee on the morning of 14 January 1916 had difficulty making its way through the debris. Half an hour later it became clear where all this came from: the island of Marken had been hit by a monster storm the night before and almost completely wiped off the map. A combination of high water and wind force ten had pushed an incredible amount of North Sea water into the Zuiderzee and caused dikes to break everywhere. There was a total of 53 deaths to mourn, sixteen of which were on Marken.

The storm surge of 1916 has sunk into the collective memory a hundred years later and has largely been overshadowed by the much larger flood of 1953. But in the Afsluitdijk Wadden Center, near the village of Kornwerderzand on the Afsluitdijk, the disaster of that time is brought back to life. Before entering the exhibition space, visitors are immersed in a short film with water, wind and movement effects that are so realistic that the danger of seasickness lurks.

It is no coincidence that this historic storm is given such a prominent place here. It was the flood of 1916 that gave the plans for the Afsluitdijk a final push. That same year, engineer Cornelis Lely completed his design for the 32-kilometre-long dam. Five years later, politicians took the decision to actually build the dike and in 1932 the job was finished.

The Afsluitdijk connects the provinces of Noord-Holland and Friesland. © OpenStreetMap / NASA

Unlike the Delta Works, where the Neeltje Jans information and amusement park was opened immediately after the completion of the construction, there has been no question of tourist exploitation on the Afsluitdijk for more than eighty years. There was a Monument in the form of a watchtower with lunchroom at the Vlieter, the place where the dike was closed, but that attracted a limited audience. A rather remarkable omission in the Netherlands that was otherwise densely occupied with museums, especially when you consider how big the impact of the Afsluitdijk has been.

Periodic flooding was a thing of the past since construction, safety increased enormously, and the door was opened for the reclamation of Flevoland. But the population of coastal villages such as Volendam and Huizen saw their main source of income, fishing, disappear and had to look for other work on a mass scale. The role of the Zuiderzee was also played out as a maritime trade route when it became the IJsselmeer. From that point on, pleasure boating became the norm. 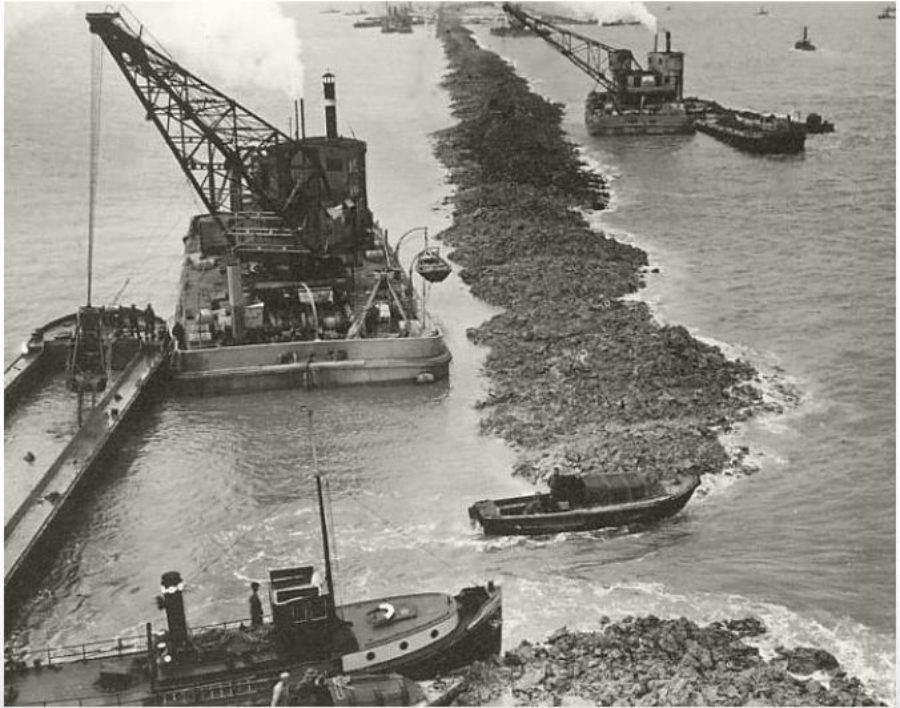 The construction of the Afsluitdijk took five years, from 1927 to 1932. © Wikipedia

These cultural-historical stories are discussed to a limited extent in the Afsluitdijk Wadden Center. More than the past, the centre deals mainly about the current meaning and experience of Lely's masterpiece. Form and content blend seamlessly into each other. The flat, rectangular building has a white façade and looks from a distance like a wave smashing on the dike. The roof does not reach higher than fourteen meters, the maximum ridge height in the nearby village of Kornwerderzand, so that the centre is neither out of tune nor dominant. 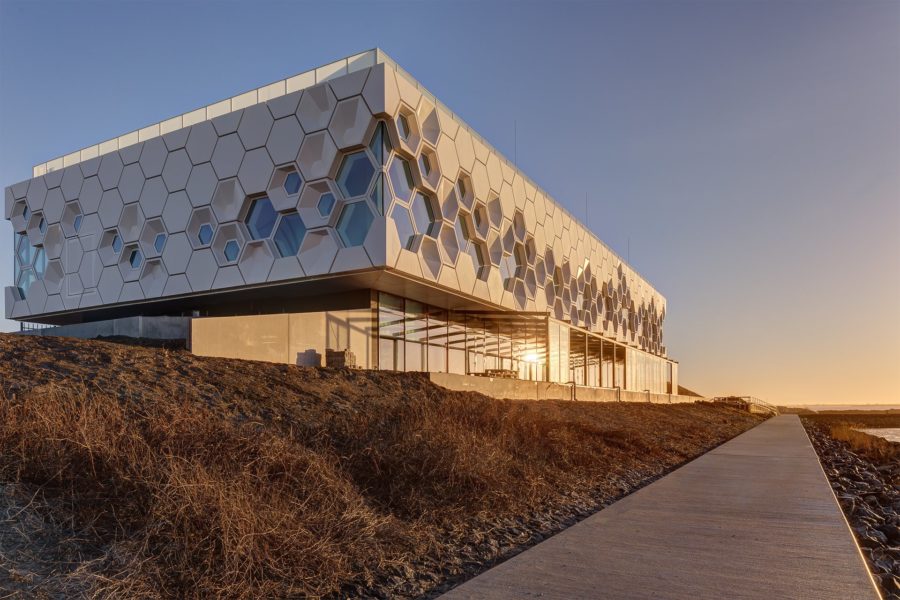 Upon entering, visitors do not have to suppress their natural need to immediately look for the observation point. Stairs and lift lead to a circular tour on the top floor. The space works as an 'establishing shot' in a film or series, the opening sequence so that you immediately know where you are and why. On the left the brown of the Wadden Sea, on the right the steel blue of the IJsselmeer. And in the middle, under a sky that could have been painted by Ruysdael, lies the straight strip of asphalt of the A7. The hexagonal windows that offer the view recall the hexagonal basalt blocks with which the Afsluitdijk was built, and the ice crystals that made skating and even car rallies on the IJsselmeer possible in harsh winters. 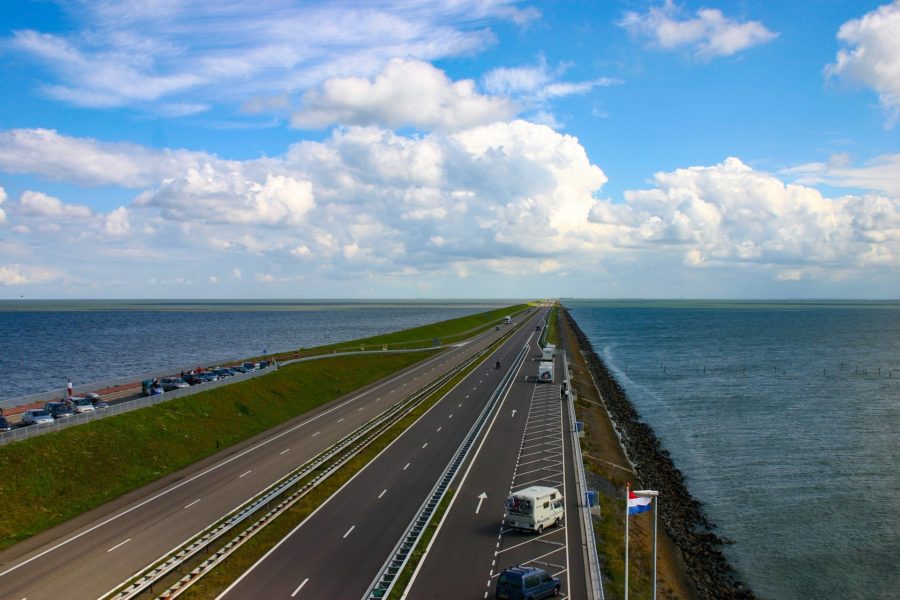 The Afsluitdijk looking north-eastwards towards Friesland from the Vlieter Monument tower. The Wadden Sea is to the left and the IJsselmeer is to the right. © Photo by Noverodus on Pixabay

The curators of the permanent exhibition characterize the invisible red thread in the exhibition as SOS: in Dutch Storm, Oplossing (Solution), Stilte (Silence). After the re-experience of 1916, the construction of the Afsluitdijk is explained and information provided about what else Rijkswaterstaat is doing to keep people’s feet dry the Netherlands. The current two-metre elevation and the dike reinforcement, which is intended to make the structure resistant to overflowing over the entire length, is also discussed. And with that, in one fell swoop, we are at the climate crisis, the potentially disastrous consequences for a country that is largely below sea level and the interventions that engineers put in place against it.

The renovation of the Afsluitdijk was immediately used to correct a mistake in Lely's design. He forgot to make a passage for marine fauna, but with a new fish migration river, fish can now swim from the Wadden Sea to the IJsselmeer and hinterland and vice versa. In addition to the special ecosystem around this separation between salt and brackish water, the exhibition pays attention to new forms of energy based on natural forces. For example, blue energy is generated with an underwater mill. The Afsluitdijk Wadden Center itself, which is constructed of sustainable composite material, wood, and natural stone, is equipped with solar panels and operates completely energy neutral. 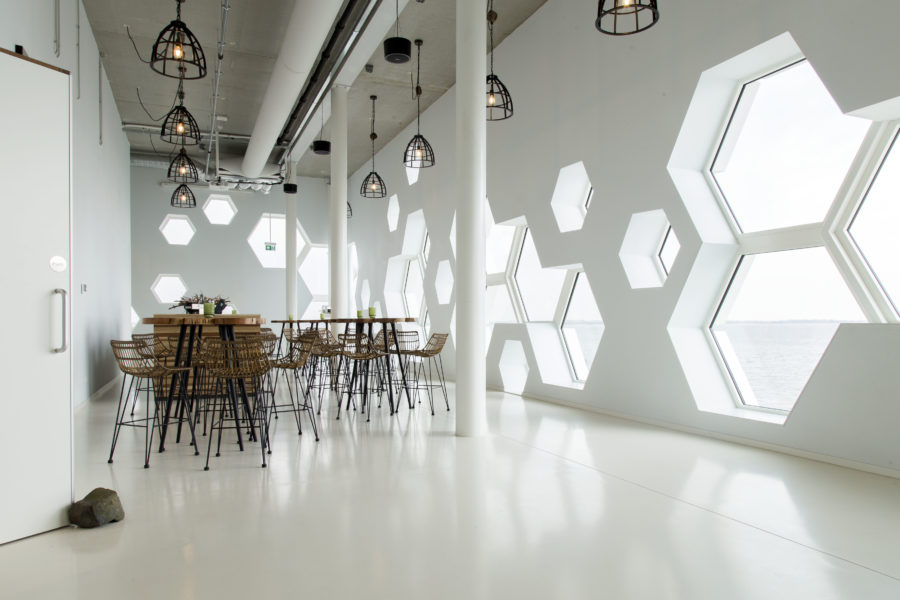 These stories are told with a minimum of objects – Lely's original desk is the absolute showpiece – and a multitude of screens and projections. There is not a single letter of text on the walls. Explanations are hidden behind QR codes and interested parties who want to dig deeper are directed to websites. For the digital illiterate among the visitors there is a sitting area with bookcase where all information can be consulted on paper. 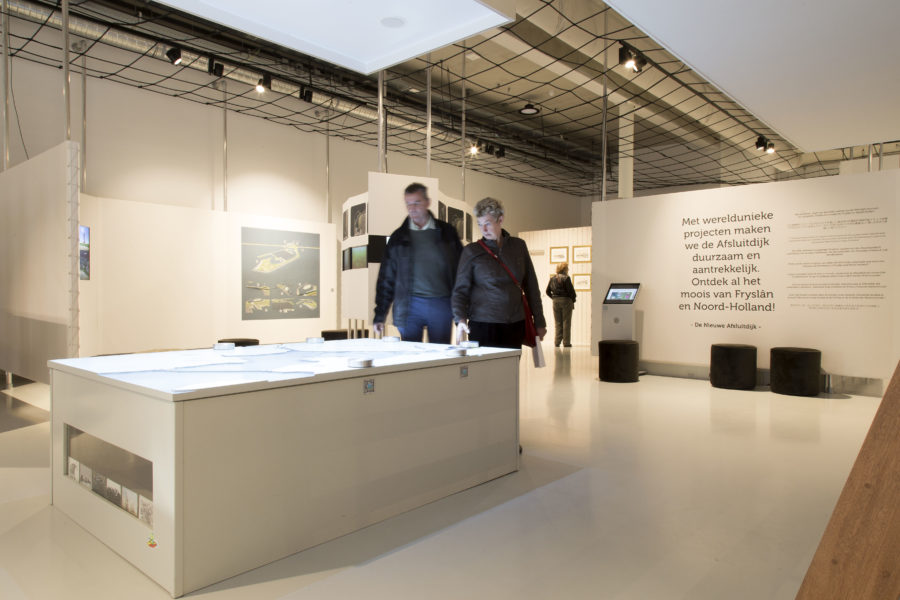 These will mainly be grandparents who are out with their grandchildren. Because the Afsluitdijk Wadden Center lends itself extremely well to this. Children can scan a drawn fish for the interactive aquarium and learn something about fish migration or simulate the bird migration over the IJsselmeer on a virtual model. The Aqua Vista Show is also tailored to their world of experience and offers a 4D simulation of a flight by hang glider over the environment.

Such attractions betray the hand of a commercial operator. The Dutch Experience Group took on a third of the construction costs – the rest was paid for by the province of Friesland – in the hope of stopping a large part of the 400,000 cars that drive over the Afsluitdijk every year. With the Heineken Experience in Amsterdam and FutureLand on the Maasvlakte 2 near Rotterdam, the company had already successfully tried out the combination formula of education, cultural heritage, and entertainment. Still, the Afsluitdijk Wadden Center is less of an amusement park than Neeltje Jans, for example. The emphasis is primarily on information transfer, but in an accessible, playful way. The fact that the exhibition space seamlessly flows into a pleasantly furnished catering facility helps with this. 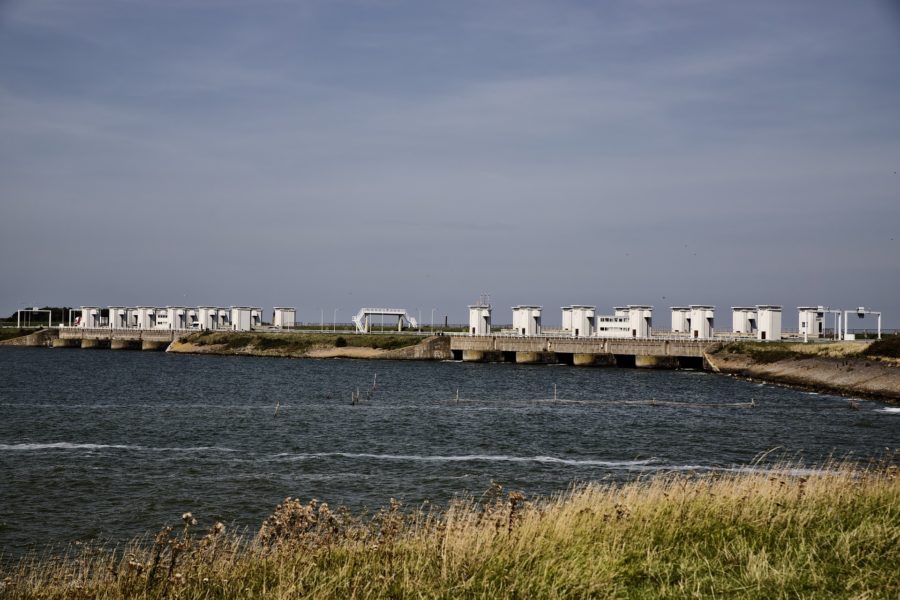 The inventors of the Afsluitdijk Wadden Center have calculated that the use of technology entails the danger of rapidly becoming out of date. The exhibition will be renewed every five to six years and the software is updated periodically so that, for example, the information about the dike reinforcement is always current. In this way, it is also possible to respond to other changes in the environment – and there are quite a few of them. New parts are added to the nearby Casemates Museum every year. There are plans in various stages of implementation for enlarging the locks, a cycle path along the side bordering the Wadden Sea, ferry connections with Makkum and walking routes. The centre on the dike, that stone wave on the basalt blocks, has the ambition to become a travel destination in its own right, instead of a stop before you enter or leave Friesland. 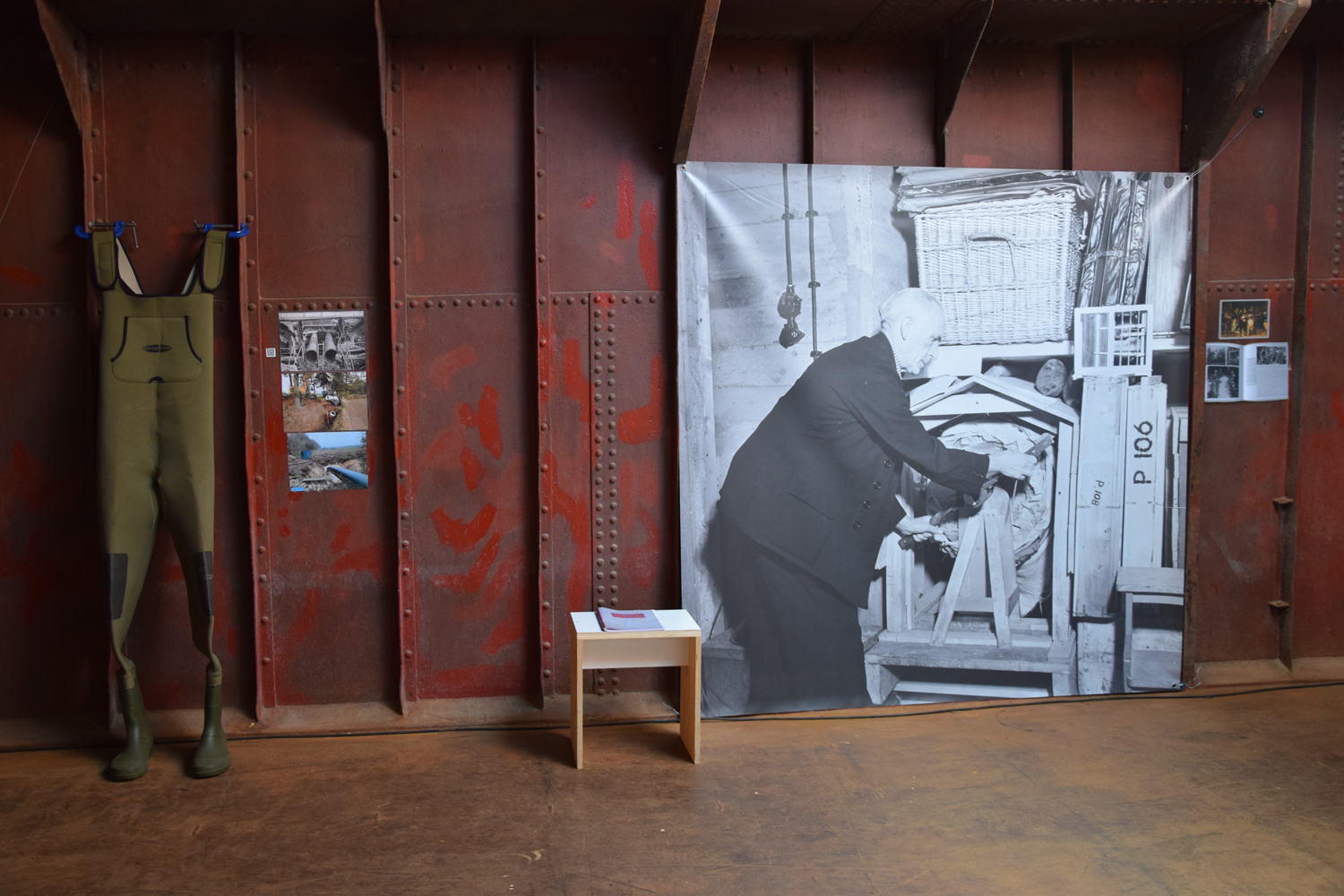