Is Alexander Vantournhout bringing dance, circus, acrobatics or performance art to the table? His performances show influences from various disciplines and are a constant exploration of the possibilities of the body. Even though it is preceded and informed by thorough study, a certain lightness prevails in his work. Herewith a portrait of this vibrant and elusive circographer. ‘Does that sound very technical?’ Alexander Vantournhout (b. 1989) asks when I raise an eyebrow at circographer, the term he uses to describe himself. ‘That’s always the way with new words. Choreographer no longer sounds technical’, he says. His performances don’t really fit within the aesthetics of contemporary dance, but you can’t really describe them as circus acts, either. And so a new word comes into being. “Movement research” might just about be a satisfactory description of the artist’s work: Vantournhout is constantly searching for non-normative ways to stage himself, dancers and circus performers. But this dry term hardly captures the pleasure and the subtle emotion the work provokes in its audiences… So perhaps circographer fits the bill after all?

Alexander Vantournhout hails from the West-Flemish city of Roeselare, but has lived in Brussels for the past eleven years. He spent his youth engaged in an unbroken chain of every imaginable form of physical activity. It all started with competitive gymnastics (twenty hours per week), but at age seventeen, he saw himself as a professional footballer.

Through the Grapevine (2020) © Bart Grietens

Shortly after, he took up a bachelor degree in contemporary circus at ESAC (Ecole Supérieure des Arts du Cirque, Brussels), after which he transferred to the dance programme at P.A.R.T.S. (the dance school of Anne Teresa de Keersmaeker). In the meantime, he aspired to a degree in sports sciences at the Free University of Brussels (now considered to be a wrong choice); after all of this, he even briefly took lessons at the Jacques Lecoq mime school (‘because there was a good teacher there’). Since then, he has kept moving and learning – this much is clear when he talks about his art practise, which at various points has encompassed judo, yoga, strength training, martial arts, and all manner of other forms. His curiosity is tireless, as is his constant research into the physical possibilities of the human body: ‘Movement keeps me awake at night.’ If he could, he tells me, he’d invent a new language of movement for every performance, but he adds immediately that such an ambition is probably impossible to realise.

Vantournhout has never been particularly interested in dance, but rather in artistic processes more generally: ‘I don’t find the aesthetic dogmas that surround dance and dancing very exciting.’ At a single glance, he picks out the movement language typical of P.A.R.T.S. when he reviews the video submissions of dancers applying for his new performance. In this sense, he sooner sees the present wave of influential Belgian dance as a choreographic one. What is innovative about this wave is not so much the movement itself as its choreographic contributions, he speculates.

Vantournhout has never been particularly interested in dance, but rather in artistic processes more generally

He doesn’t see himself as a good choreographer, but he does feel he excels in researching movement. His hybrid curriculum has taught him much in this regard. Constant reflection on the crossover between different disciplines is one of Vantournhout’s key motives. He offers the dramaturges he works with new sources on strength training or movement technique, and they in turn help him to sharpen his own questions. Valstudie (Falling Studies) is just such a body practice synthesised from circus studies and judo. For Aneckxander (2015), his breakthrough performance as an artist, he devised his own five scenarios for falling onto his back. Independently of the environment, his balance (and the hot, sweaty surfaces he slips and slides on) he repeatedly chooses one of these fives modes of falling. Yet ‘choose’ is not quite the right word: agility is a term that points to a form of control that one simultaneously transcends. ‘Dancers never learn to fall, and yet falling is something that all dancers will experience at some point’, he says.

Autobiography of the Body

Aneckxander, a work he created together with circus-dramaturg Bauke Lievens, has a subtitle which reads: A Tragic Autobiography of the Body. He stands on stage stark naked with a shaved head and in a disarming way he plays on the limits of his own body: how far can you lean forward before you fall over, how can you stretch those limits wearing platform shoes and boxing gloves - literally how far can he stretch his neck? ‘I like to change my body a little bit for every performance’, he says. ‘For example, for this performance I stretched my neck by hanging from it.’ Vantournhout always speaks in examples. It lets on to his continuous search for new possibilities. Also from the circus comes Vantournhout's way of working with simple objects, of which he explores all affordances (I would use the word “possibilities”, but Vantournhout sees nuance here). The relationship with an object is hugely interesting to him. His very first performance, Caprices (2014), was a duet with a giant hoop. In Raphaël (2017), also co-created with Bauke Lievens, the object is another performer, but a seemingly dead one. ‘Every body is also an object’, the circographer explains. For a whole performance he drags around a lifeless body around, which gives him no sign of life, except for looking out of wide-open eyes. The audience is seated along two sides of the stage. It seems to be an impressive, but also testing experience for everyone: one in every three performances saw some members of the audience get up and leave because it was so overwhelming, others shouted at him to stop. Vantournhout himself often ended up with a seized-up back, but it was his co-performer who eventually decided to stop touring. It was too hard for him both physically and psychologically. To have to warm up completely but not be allowed to do anything is an unsustainable stress for the body. Words like flexibility, mobility, dexterity, elasticity, kinetic potential, locomotion, contra- and ipsilateral, monoplainer and pratique minoritaire constantly creep into the conversation. Many of them are English terms because he creates and performs so much abroad. In Avignon, he accompanied the French actor Scali Delpeyrat in La rose en céramique (2018), acting as an interpreter of his inner, unstable feelings. Vantournhout calls the performance an arranged marriage as they were put together without knowing each other - but the result is fascinating. The dancer not only performs Delpeyrat’s amplified movements, he is also a projection, a kind of angel, of the person whom the protagonist so longs for. The piece was only performed once, and a lack of time negates the motivation to repeat the performance.

Having once been an elite athlete, Vantournhout continues to work out hard today. In addition to two half-hour strength training sessions per week, he regularly practises Iyengar yoga, tai chi, and oriental martial arts. Although his life doesn’t demand such rigour, he wants to be able to physically take on any challenge.

In Red Haired Men (2018) four men bring a mixture of dance, circus, acrobatics and theatre to the stage. Disappearing tricks and humour take centre stage and fill the large hall. Vantournhout wanted to create a contemporary dance piece that is accessible to everyone. This includes school children, for whom watching performances is often compulsory. For that reason he wants to present something that requires no previous theoretical know-how. He reserves one or two of his approximately 100 performances per year for schools. This is quite exceptional for the world of dance, and the sector doesn’t support the development of free performances, as a show like Red Haired Men, with four dancers on stage, makes for an expensive production. In the summer of 2019, Alexander Vantournhout created Screws. It was a bull’s eye. The performance includes three acrobats, a dancer (with whom he also recorded the video Snakearms), and Alexander himself. A selection of short scenes follow on from each other, each taking place in a new location. The spectator has to move together with the performance, which amazingly strengthens their physical involvement. Unexpected things like alpine boots with crampons, or dangling upside down from a bar with gaiters on, encourage the performers to create the most absurd duets. Vantournhout himself swings a bowling ball around like a dangerous weapon. Each and every performer defies the laws of gravity and the predictable expectations of circus and dance. However, it is all carefully calculated. Vantournhout once tried out some dangerous things in the studio, but he doesn’t want to scare himself anymore. By the way, he has a fear of heights, he admits.

As a spectator of Screws, one quickly loses sight of which leg belongs to which dancer. Ten hands wriggle between one another and intertwine themselves into precarious constructions. If just one were to let go, the whole thing would inexorably fall apart. Here Vantournhout deliberately chooses to break the silence with music and to inject the performance with sufficient vibes. At the end of the performance, everyone walks to a public space. In Paris they walked to a nearby park. ‘This feels totally natural. As the performers leave the theatre, people who can’t buy a ticket also get to see a show.’ The circographer insists he wants to make the distance between the theatre and the street as minimal as possible. Theatre isn’t a question of walls, he knows.

In October 2020 Through the Grapevine will premiere in the Ghent Arts Centre Vooruit. Two circus men, one of whom is the circographer himself, put their well trained but imperfect bodies on stage. Both are the same height but one has long legs and the other has a long torso. They try to find out how to challenge or rather complement each other. Imperfection, humour and a moved dexterity are an essential part of Vantournhout’s performances.

Another project is also currently under construction: Inschrift (Inscription). Inschrift’s themes are animal migrations and the crossing of migrants on the border between Mexico and the USA. ‘A human is also an animal’, says Vantournhout. With Inschrift he wants to find out how animals move to make their tracks as minimal as possible. It will be the first time that Vantournhout won’t take to the stage himself, as he wants to look at the movement potential of the female body – ‘this is different because of their hips and shoulders, especially when they move on all fours.’

This seems like a strange way of thinking, but actually it reveals an interesting approach. Alexander Vantournhout's ultimate aim is to allow the viewer to become more sensory. ‘Perhaps afterwards people will become more aware of the tracks they leave?’ His major concern after all is that we are all becoming less body aware and are evolving more towards a humanoid. ‘Ask yourself now, can we still function without shoes? And who knows where east, west, north and south are anymore? Just examples.’

I want to support the low countries
dance circus 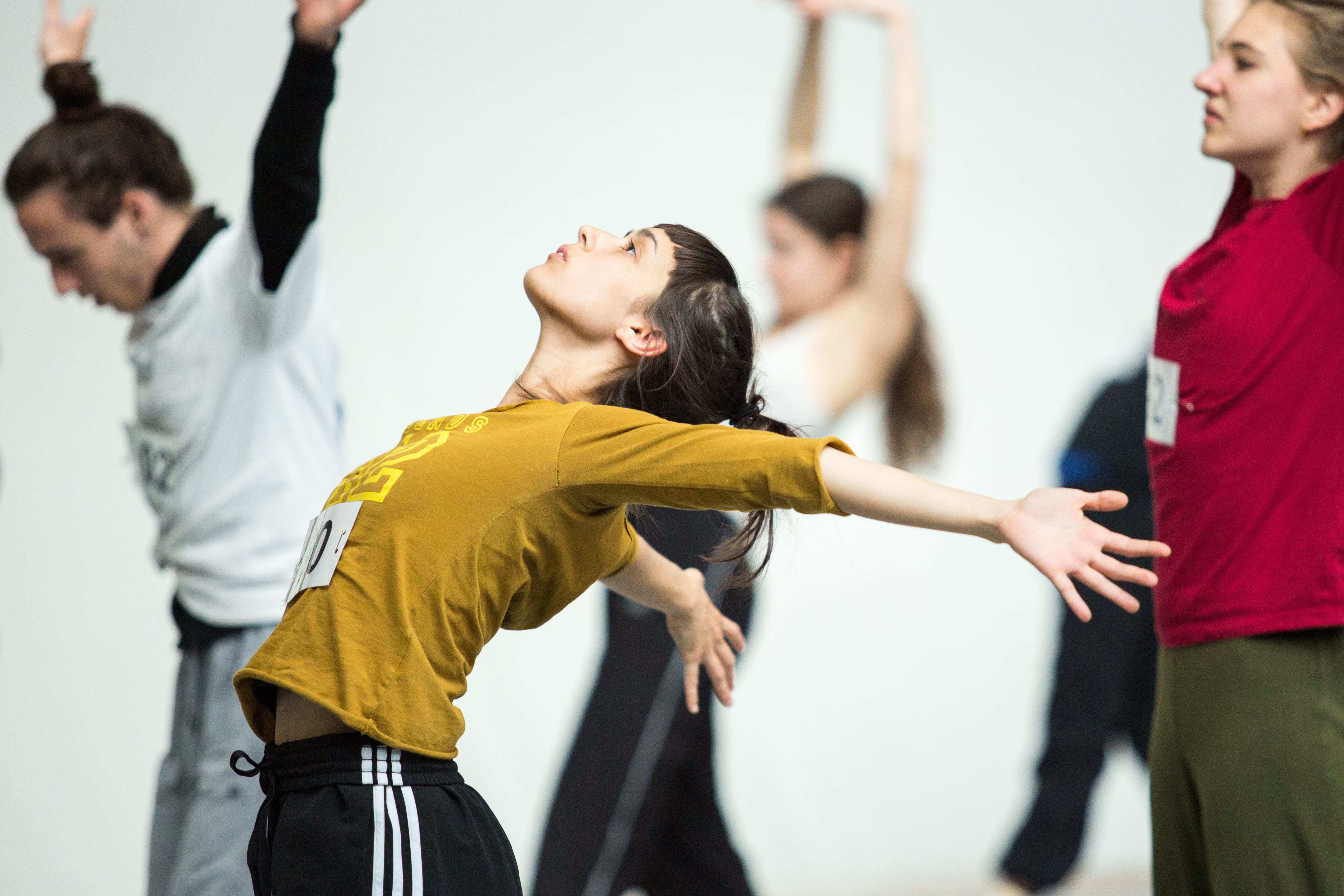 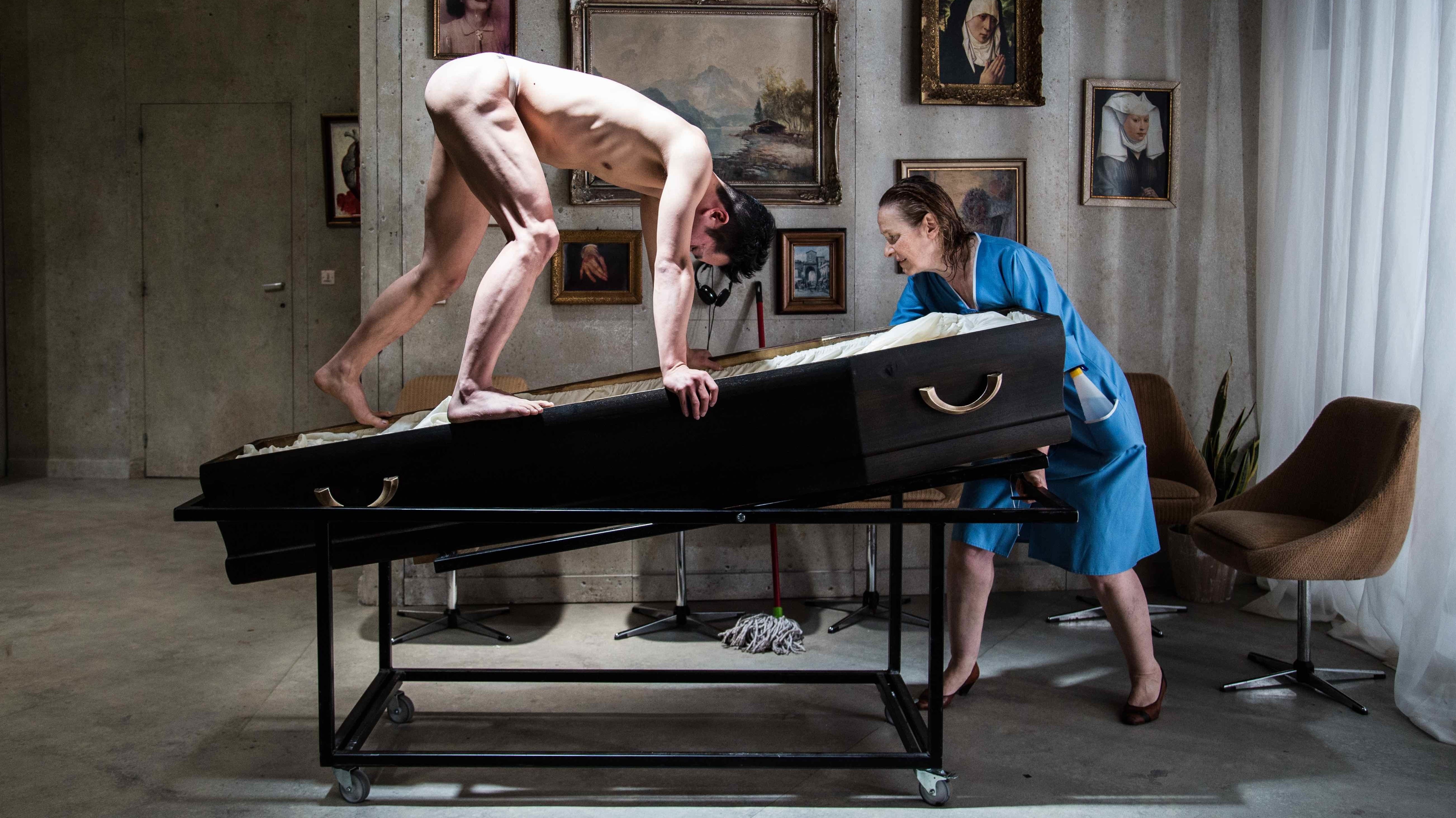 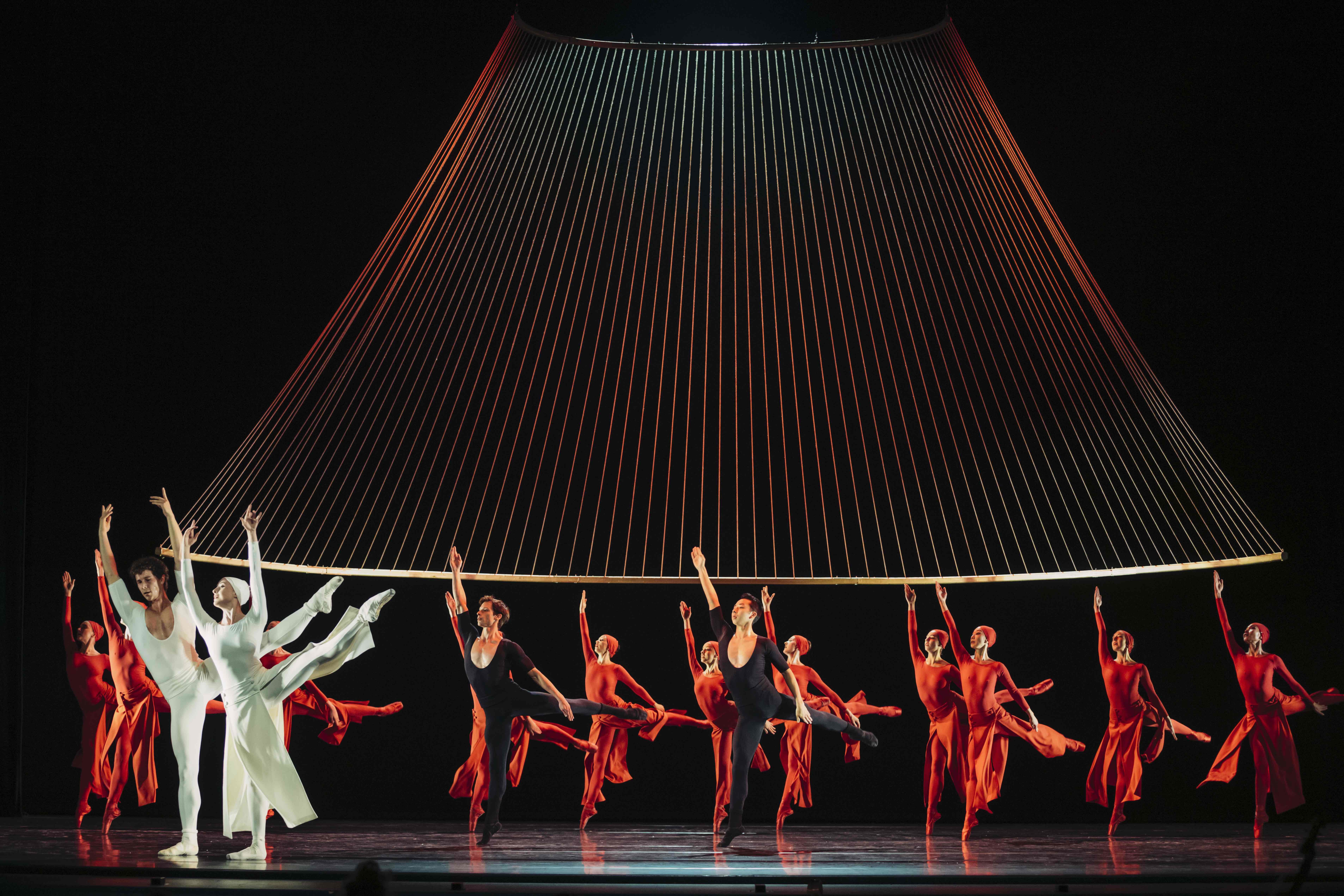