The associations you spontaneously make with the popular seaside town Blankenberge are probably not directly linked to art or a rich past. The queen of seaside towns it is not, but there was a time when it could certainly rival Ostend. The Belle Epoque Centre shows how, in its heyday, from 1870 till the First World War, the European middle class liked to go Blankenberge to enjoy the healthy sea air and healing seawater. Their presence has left some beautiful marks on the city.

Walk along the seafront past the casino and Serpentarium these days and you stroll past a veritable Atlantic Wall of concrete and PVC, towering summer apartments in uniform grey style, a succession of tearooms and tourist stalls selling ice cream, waffles and mussels. On the beach, from west to east, there is nothing but amusement arcades, bars, toys and entertainment. 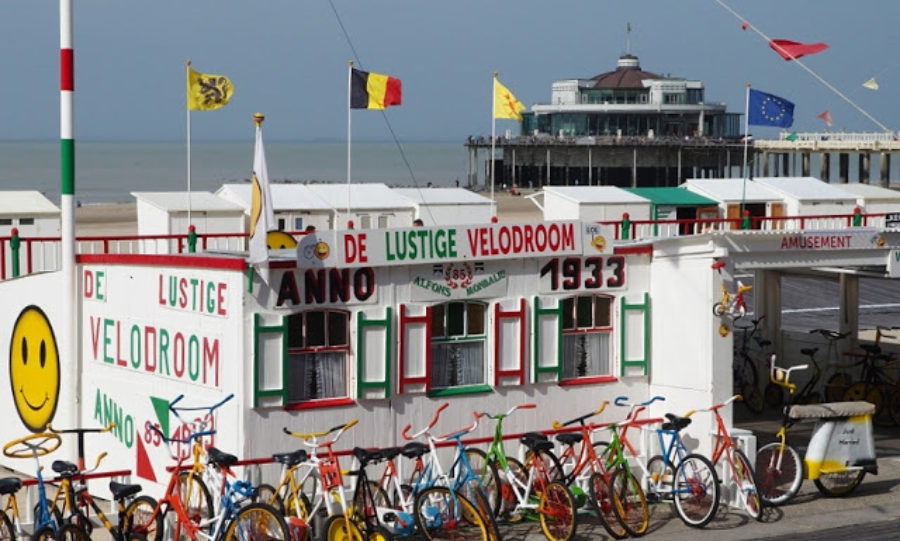 Was that really so different a hundred years ago, then? Well yes, a bit. If you turn your back on the sea and go deeper into the centre of Blankenberge, you will be amazed again and again by the streets around the Sint-Rochus church. There are impressive facades to marvel at, pearls of Art Nouveau and Art Deco, city palaces reminiscent of Brussels’s boulevards, Ghent’s avenues or Antwerp’s leien at the start of the last century.

This is where Blankenberge’s coastal tourism began. Here and there you can still find traces of the frivolous, well-to-do atmosphere that prevailed here round the turn of the previous century. The so-called Golden Age did not pass Blankenberge by unnoticed. Halfway through the nineteenth century the little fishing town underwent a rapid transformation into a lively seaside town. As of 1863, the railway line from Bruges made Blankenberge more accessible, resulting in the first tourists flocking in from the big cities, particularly Ghent.

The middle class, which was becoming increasingly prosperous thanks to the industrial revolution, wanted to escape from the busy, dirty towns on sunny days and enjoy the benefits of ‘sea cures’, in the manner of the British. Unlike the day-trippers from the surrounding hinterland, who had been coming to the seaside since the end of the eighteenth century, these middle-class seaside tourists descended on the coast for longer periods. Romantic artists showed interest and royal families’ early enthusiasm for a residence at the seaside ensured Blankenberge’s breakthrough as a tourist destination. 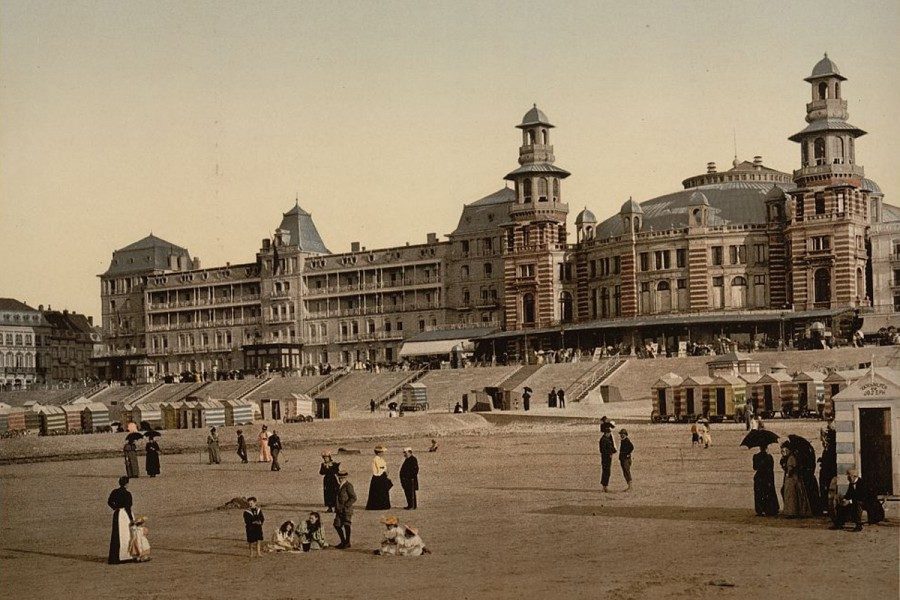 The first bathing cabins appeared on the beach in 1838. Shortly afterwards, a wooden boardwalk was laid along the seafront for strolling, watching and being seen in the healthy sea air. The first hotels and handsome public buildings were put up in the contemporary style. The seafront was completely built up, with one villa after the other, and an impressive casino took the place of the Napoleon Fort, which was demolished in 1873. The fishing boats, a centuries-old sight on the beach, moved to a safe haven.

Hundreds of buildings have been lost over the years, but Blankenberge still has some lovely Art Nouveau houses with wonderful tile pictures that are among the best European tiles in the world. 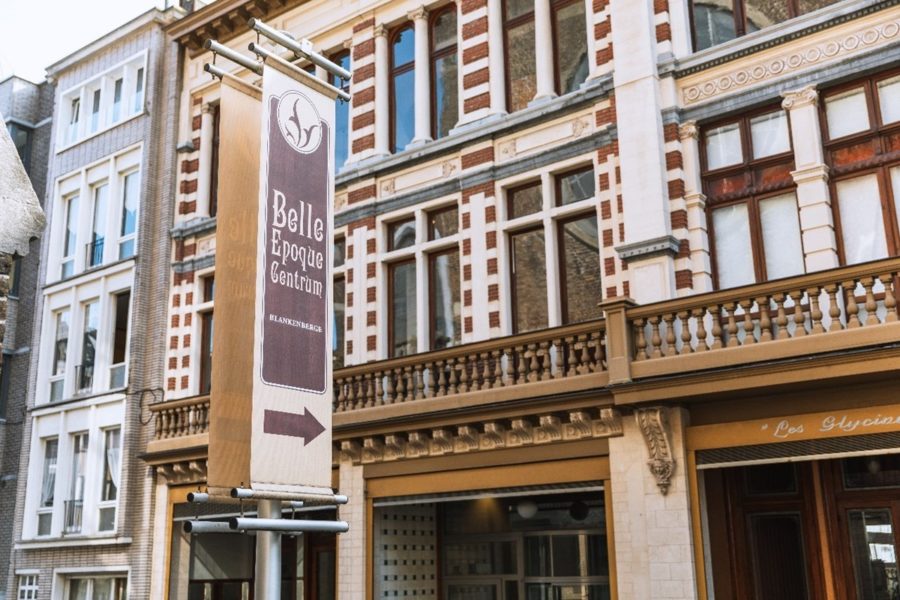 Discover the Belle Epoque yourself

Three belle époque villas dating from 1894 were restored and converted into the Belle Epoque Centre, which opened in 2008. More than just a pleasant museum it is also a knowledge centre, intended to enable the discovery, preservation and opening up of Blankenberge’s Art Nouveau. An interactive exhibition, which you can best visit top-down, descending from the roof terrace to the cellar, immerses you in the atmosphere of the exciting period round the previous turn of the century. 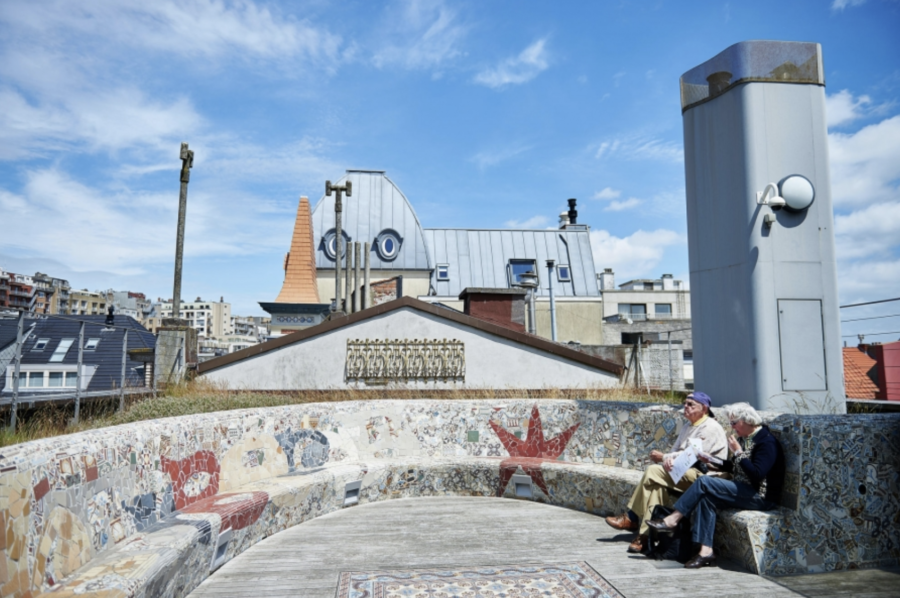 On the roof terrace you can enjoy the view of the beautifully decorated facades all around and the church, which was built in 1830 for the benefit of the many summer tourists. The lovely floral motifs on the terrace contrast starkly with the wall of apartments you can see further along the seafront. The curved mosaic bench was made from hundreds of broken tiles, salvaged from various belle époque houses, and is reminiscent of the roofs of the Gaudi houses in Barcelona, which date from the same period. Typical style elements can be found on the terrace: authentic leadlight windows, with small sections of cut glass supported by lead cames, and the elegant cast iron balustrades. 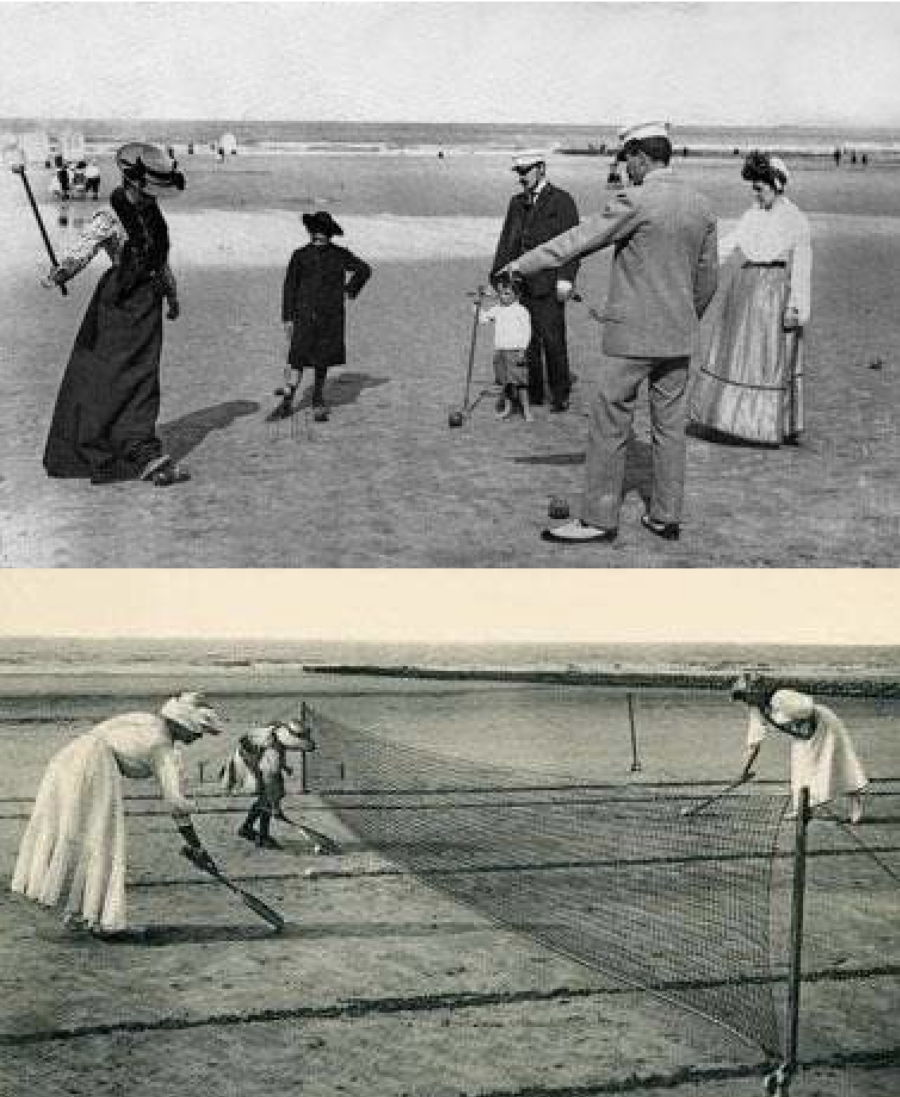 On the lower levels, posters, photos, postcards, articles of clothing and other articles are displayed, illustrating the lives of high society and the local population in an attractive and fun manner. There is an entertaining package for children with questions and things to look for. With films, authentic dresses and accessories, fragments of music, audio in Blankenberge dialect, maquettes, the model of a villa built with Lego, there is a lot to discover. You can even send home a postcard from the previous century via mail. 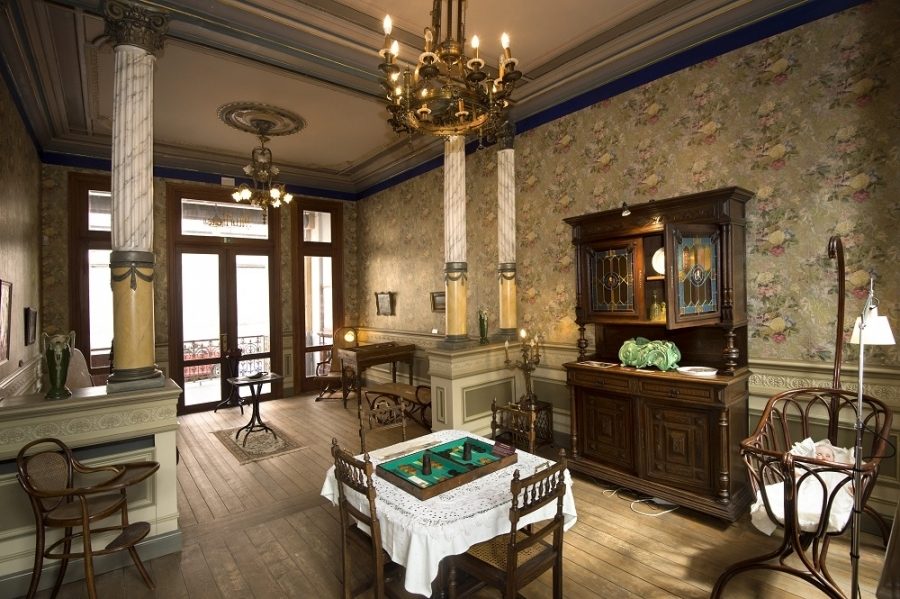 Salon of the Belle Epoque Museum

It is clear from the many photos and other evidence of the wide range of amusement, recreation and sport on offer here over a hundred years ago, that seaside visitors came to Blankenberge for more than just peace and quiet, iodine-rich air and paddling in the sea. Donkey rides on the beach, a flower parade, acrobats, boat trips, fireworks, croquet, horse racing… the entertainment and radio shows of our summers are the contemporary complement. On the ground floor you enter the salon with its beautiful Thonet furniture, completely in keeping with the fashionable style of the time.

In winter, you can really revel in the fin de siècle atmosphere during ‘Bel’Lumière’, a three-day event in the area around the Belle Epoque Centre, where the focus is on fire and light. The leaded glass windows of the church and the facades of the historic buildings form the backdrop for a video and light show. Locals, dressed up in the costumes of the period, create a charming atmosphere with their stalls and activities. They will let you take stylish photographs of them in this historic setting.

Watching and showing off 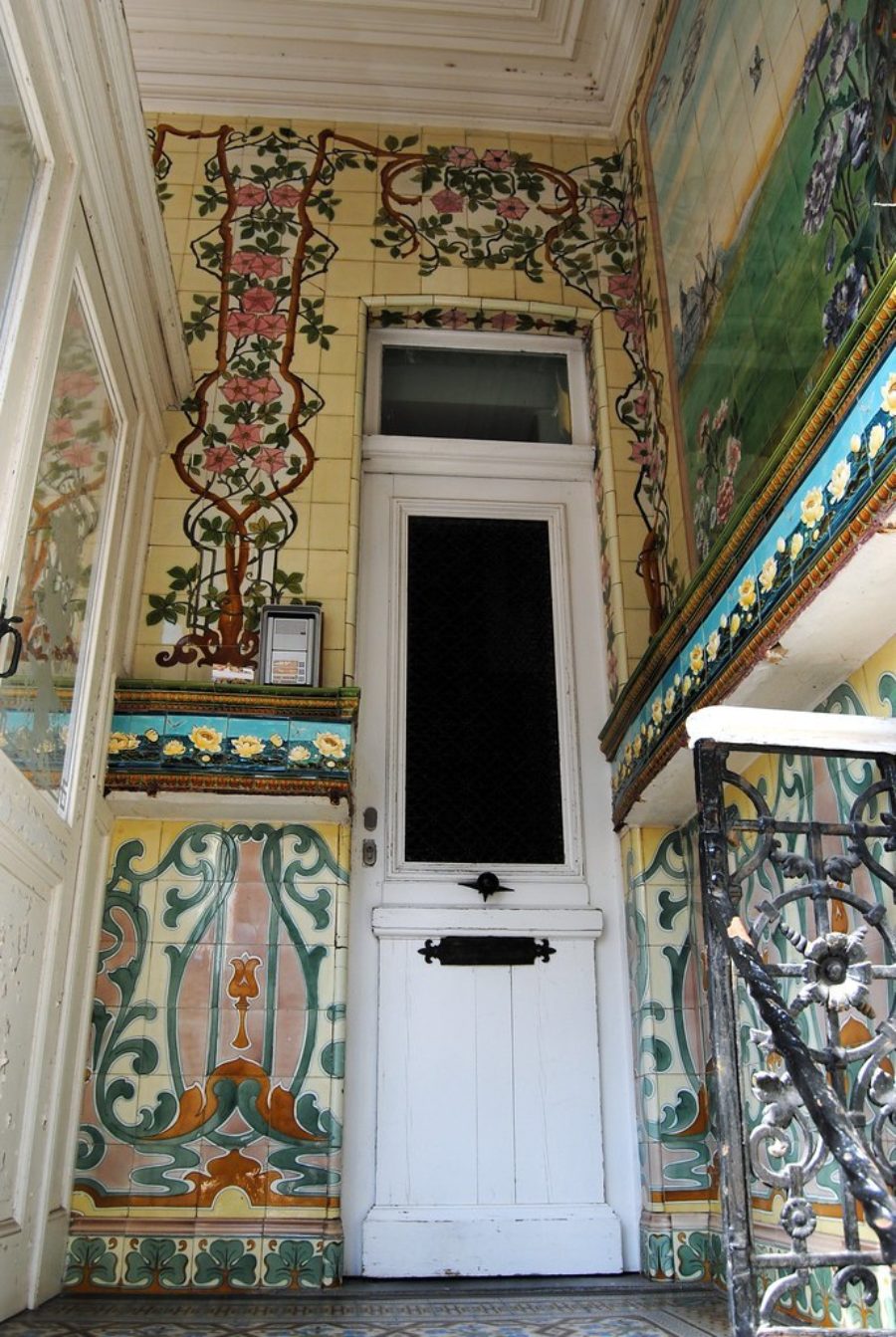 Almost all coastal villas had a loggia, or covered balcony, at the front of the house. The owners could sit there in the shade and enjoy the sea air. At the same time, it was an ideal showcase from which to display their prosperity and the ladies’ beautiful outfits to passers-by. The loggias were often richly decorated with artistic wrought ironwork and ceramic tiles with Art Nouveau motifs or exotic animals and plants. In terms of tiles, Blankenberge has among the best heritage in Europe. At the entrance to the centre, in the middle building, you will find the original tiling from the loggia, with wonderful tiles depicting swans at the top. The production of the tiles, which came from Limburg and other parts of the country or from Europe, is explained in detail in part of the exhibition below. Villa Olga, a little further on in this neighbourhood, has a beautiful tile tableau with flower scrolls and landscape scenes. Take a walk (with or without a guide) and discover this unique heritage. 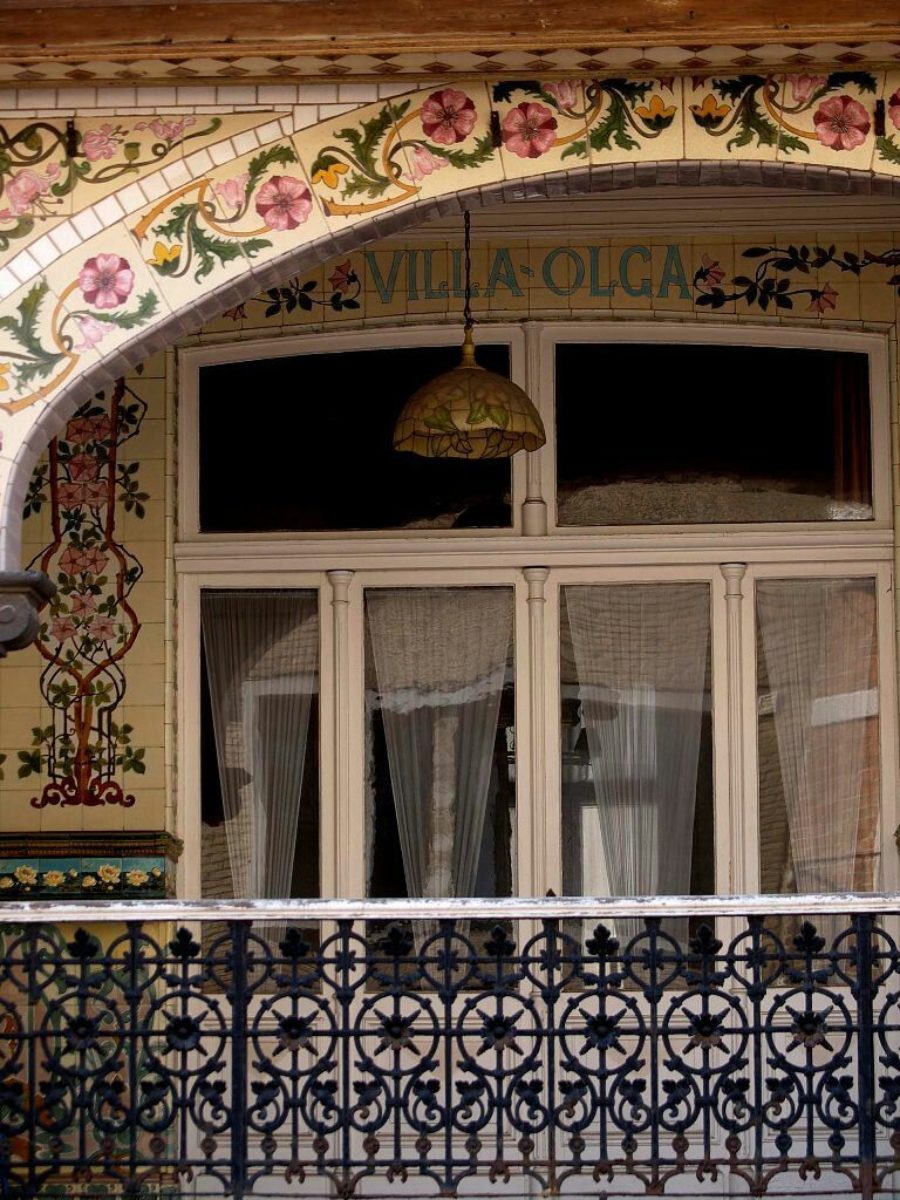 These beautiful testimonies of a rich past show that, in the early twentieth century, Blankenberge was a meeting place for high society, and artists Valerius De Saedeleer, Henry Van de Velde and Emile Verhaeren liked to come and visit too. But unfortunately the golden age did not last. By the end of the nineteenth century the seafront had been completely built up and there was a cast iron pier. After the First World War, in 1933, the pier was replaced by a concrete one and a new Art Deco style casino was built in front of the old casino. The Great War gave rise to new architectural concepts. Economy encouraged creative solutions. New styles emerged with new materials, including reinforced concrete and cimorné (cement cladding with glass particles in it). There was an irresistible drive to beautify the town, but the elegance and opulence of Art Nouveau gave way to the streamlined balance of Art Deco. 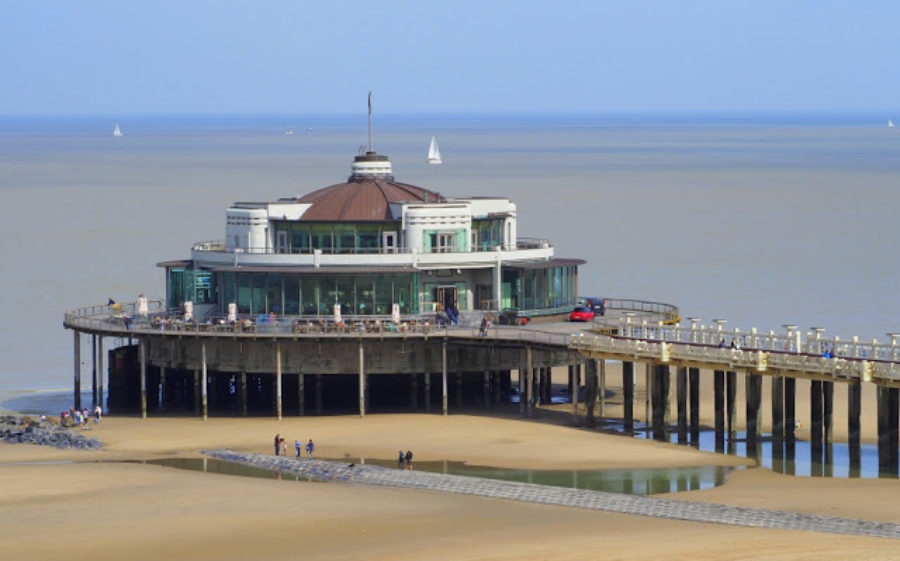 The Pier of Blankenberge

The villas and hotels along the seafront were almost totally destroyed in the Second World War. During reconstruction quality and solidity took precedence over aesthetics. But tourists soon found their way back to Blankenberge, and with the democratisation of tourism the seaside town began to receive a different type of visitor. The elite gradually shifted their allegiance to fashionable Knokke and De Haan, while the middle class from the Belgian interior came to Blankenberge. In the mid-1950s, luxurious hotels like Hôtel des Bains et des Familles gave way to apartment buildings. Aesthetically, Blankenberge has not made unqualified progress since then. Fortunately, for those who want to rediscover its beauty, there is the Belle Epoque Centre. Offering more than just nostalgia, it honours the Golden Age of Blankenberge.

MIMA: The Museum That Wants to Be a Game