Big and Grand. The Indomitable Imagination of FC Bergman

With their extraordinarily imaginative, poetic, grand-scale productions, the Antwerp theatre collective FC Bergman was quick to conquer the European stage. The focal point of their performances is the floundering human, on the point of losing his grip on his environment, whose naïve attempts to remain standing conceal great beauty and cause for compassion.

From its debut show, De Rotsebreker (The Rock Crusher), in 2008 to the megalomaniac JR ten years on, the trail of innovation that FC Bergman has drawn across the landscape of Flemish theatre in barely a decade has brought considerable excitement among press and public alike.

Meanwhile, FC Bergman has evolved from a lightly anarchic collective, independently cobbling together site-specific shows, to a major attraction at Antwerp’s municipal theatre, Toneelhuis. FC Bergman puts on co-productions with the greatest European festivals and has even digressed into opera. They have grown more professional, but FC Bergman has always retained their artistic Sturm und Drang. 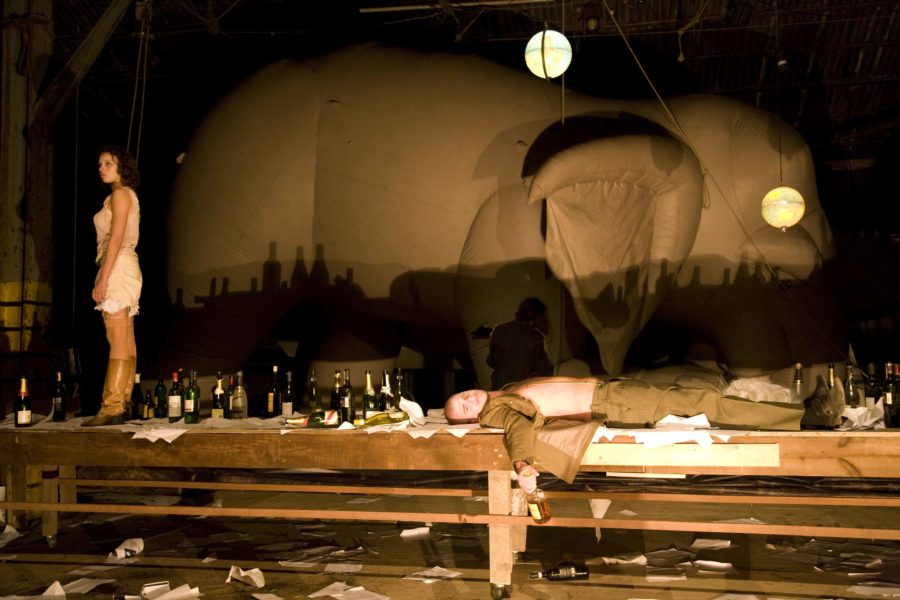 After studying at the Royal Conservatoire Antwerp, Stef Aerts, Bart Hollanders, Matteo Simoni, Thomas Verstraeten and Marie Vinck, supplemented by stage technician Joé Agemans, joined forces as FC Bergman. The FC stands not only for ‘Football Club’, but also for ‘Foute Club’ (improper club), or at least that’s how they described themselves at the time of De Rotsebreker, in which they combined scenes from Het leven en de werken van Leopold II (The Life and Works of Leopold II) by the eminent Flemish author Hugo Claus (1929-2008) and excerpts from Fort Europa by the Flemish writer Tom Lanoye (born 1958) with improper musical scenes and an inflatable elephant. 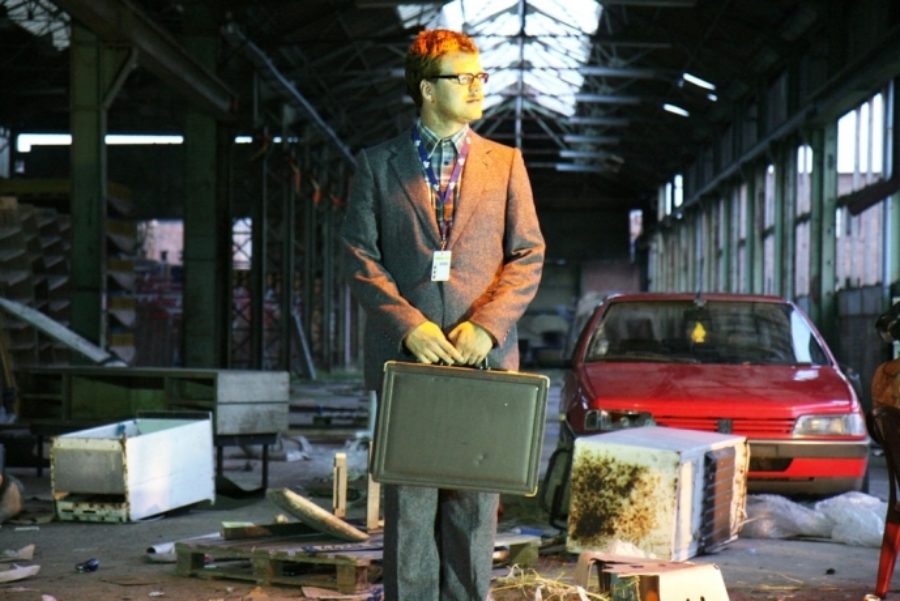 It was clear from the outset that the group had a grand vision. The breakthrough came in 2009, when FC Bergman won the Young Theatre Prize at the Theater Aan Zee festival in Ostend, a traditional springboard towards a career in the performing arts. The winning piece was a raw version of De Thuiskomst (The Homecoming) by Harold Pinter, performed on top of an enormous mountain of rubbish. Two years later they also put on Pinter’s Het Verjaardagsfeest (The Birthday Party), performed as an absurd farce in the canteen of an Ostend rowing club. 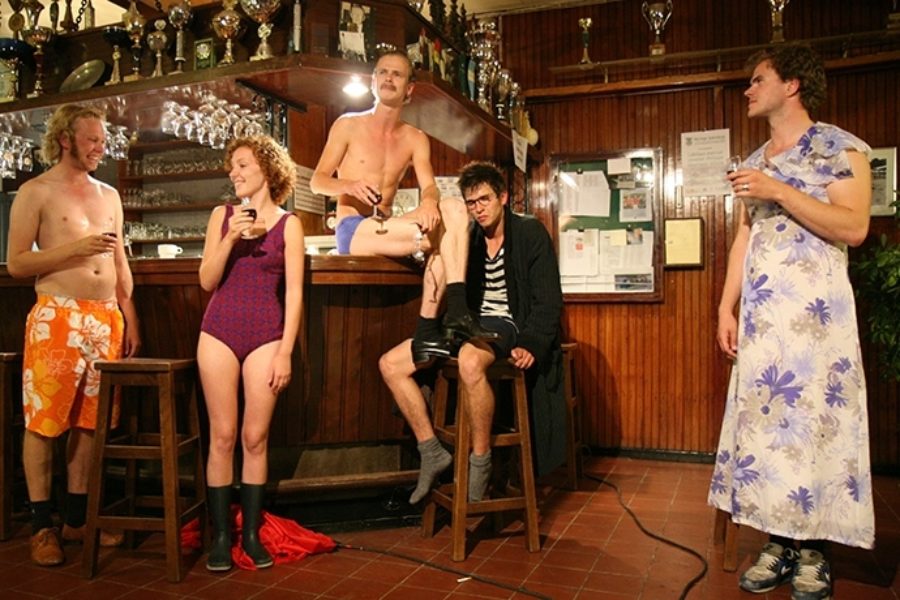 But in their early years, FC Bergman mainly acquired fame with wordless, grand-scale productions such as Wandelen op de Champs-Elysées (A Walk on the Champs-Elysées). This megalomaniac marathon production of 2009, loosely inspired by Dante’s Divina Commedia, premièred in the neo-gothic Oude Handelsbeurs in Antwerp. Romeo Castellucci was never far away in this grand, emotional epic filled with radical scenes and baroque poetry.

In 2012 FC Bergman alighted upon another iconic location in Antwerp: the port. Against a backdrop of boats sailing by, the audience watched Terminator Trilogy, in which a tiny mouse (the naked Stef Aerts) lost his way, on a large concrete surface, but also in his own mind and in an unhinged world. The insignificance of man in contrast with the chaotic world around him: it was to become a constant in FC Bergman’s oeuvre. But in this wordless collage production the design elements – an enormous billboard, pendulums of moving furniture, parades dancing in the style of Pina Bausch – remained more prominent than the rather sketchy line(s) of the play.

The 2011 production 300 el x 50 el x 30 el, knocked together by FC Bergman in barely a month at Antwerp’s Bourla Theatre, left a stronger impression. Initially, the piece was only planned to be shown on one evening, which caused the demand for tickets to explode and merely served to increase the hype around the collective. In the end, it became one of their most popular productions, touring for years. The concept of 300 el x 50 el x 30 el was particularly unusual. FC Bergman constructed a hyper-realistic village square and pine forest on stage. A camera travelled continually around a circuit, allowing the viewer, via a large screen, to stare into the little cottages of the villagers, some of whom were played by amateurs and extras. The result was a passionate and unusually detailed creation, a theatre film the making of which could be followed live.

Antwerp theatre company Het Toneelhuis, which has its home at the Bourla Theatre, fell head over heels for FC Bergman’s bravura. In 2013 Het Toneelhuis absorbed the group into its ensemble of makers, allowing them to share a great many technical and logistical tasks. The first creation with Het Toneelhuis was Van den vos (About Reynard the Fox), perhaps their best production yet, as FC Bergman struck a wonderful balance between stunning form (live music, live video…) and narrative force. 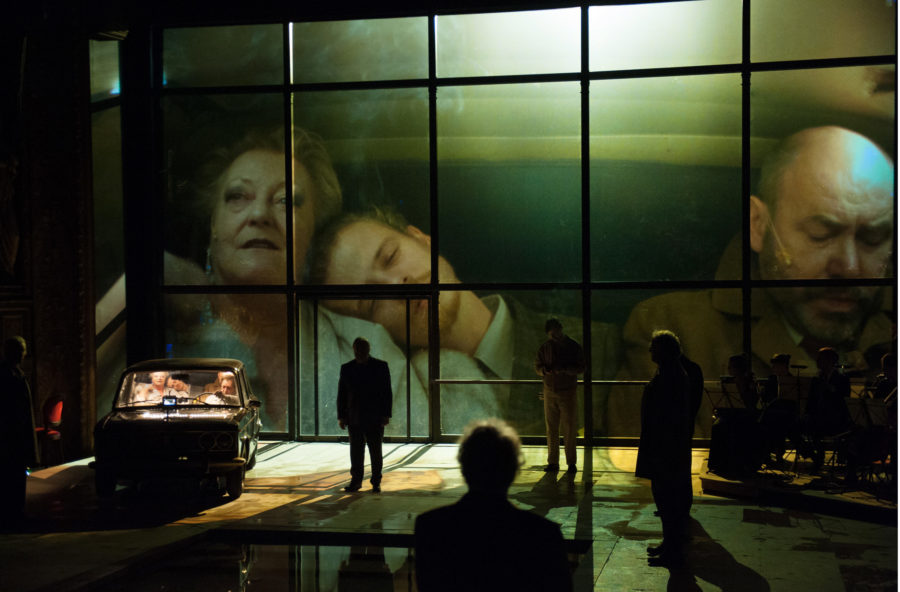 This time FC Bergman radically renovated the Bourla Theatre. The parterre became a marble swimming pool and the stage supported a thick forest. A revolving door formed the hinge between the two worlds – culture vs nature. It was a clever ploy for this modern retelling of the Middle Dutch beast epic Reynard the Fox: about how every well-behaved, civilised human being also conceals within them a sly fox and a wild primal force. Following on from their previous success with Wandelen op de Champs-Elysées, the production of Van den vos won FC Bergman a second selection for the important Flemish Theaterfestival as one of the best shows of the season.

Another step towards greatness

Just when you might think that FC Bergman has reached their limits, the group takes it up another couple of notches. In The Land of Nod (2015) they built a life-sized imitation of the Rubens Room at Antwerp’s Royal Museum of Fine Arts, which has been closed since 2011. Once again, it is a wordless production, somewhat reminiscent of Terminator Trilogy: again, Stef Aerts takes up a position as the victim, this time as a conservator who fails to move a Rubens painting which is in every sense monumental. The Land of Nod won FC Bergman their first invitation to the Festival d’Avignon.

The most megalomaniac production so far was undoubtedly JR, the number one theatrical happening of 2018 in Flanders. JR is an adaptation of a novel by William Gaddis about the destructive power of capitalism. In order to show how, in his inexhaustible hunger for more and better, man can become lost in a labyrinth of choices, the group built a confusing four-storey construction, an apartment block in which a camera crew filmed everything that happened and in which the audience, depending on which platform they were watching, received a somewhat different view of the performance. Like 300 el x 50 el x 30 el, JR was a live film, in which, besides the visual spectacle, it was mainly the phenomenal actors who stole the show. 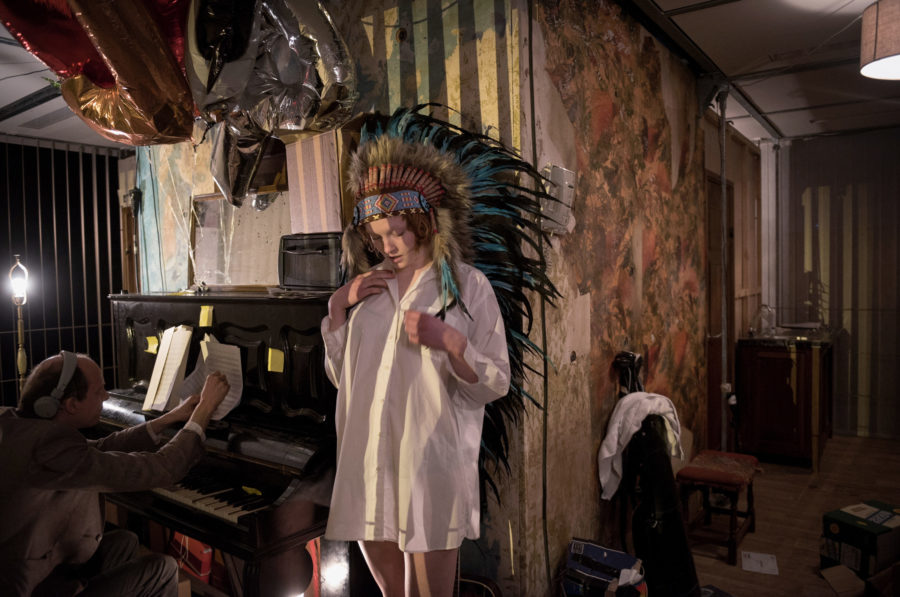 After JR, which could not be topped in terms of scale, it was time for new directions. Simoni and Hollanders withdrew as core members to focus on their careers in TV and film. As a foursome, at the end of 2018 Stef Aerts, Marie Vinck, Thomas Verstraeten and Joé Agemans produced their first opera: Les Pêcheurs des perles by Georges Bizet at Opera Ballet Vlaanderen. Their debut was met with a markedly positive reception. FC Bergman also succeeded in reconciling their indomitable imagination – expressed in a revolving stage, a giant wave which the actors climb, a character peeling off his skin – with the tightly controlled machine and conventions of opera. That was the result of a group of directors who had grown ever more expert at deploying theatrical tools, even when working in a new genre.

A surprisingly conventional production for FC Bergman was Freud (2019), for which the group collaborated with the famous director Ivo van Hove and Internationaal Theater Amsterdam. FC Bergman adapted Sartre’s unused film script about Freud for the stage, placing Stef Aerts in the title role. The scenography and direction were vintage Ivo van Hove, making this project an anomaly in FC Bergman’s track record.

At the time of writing, FC Bergman was putting the final touches on their new production The Sheep Song, without knowing when it might be performed (the première was planned for 14 January 2021). The Sheep Song is once again a wordless play, a modern parable confronting the fear of change as well as its attractive force in a human life. Originally conceived as a fairly small-scale production, in the course of the creative process The Sheep Song will surely once again take on (even more) epic proportions. After all, it’s what FC Bergman do best: telling big stories, in a grand form.

From Simple Movement to Mythical Feat, the Uncompromising Theatre of Schwalbe