Cesar Majorana: Confessions of a Copy

At the request of the Flemish-Dutch House deBuren eighteen young Flemish and Dutch authors each brought a painting from the Rijksmuseum back to life. They wrote a new text about an old work from the Gallery of Honour, based on one key question: what do you see when you look at these paintings through gender glasses? Cesar Majorana gives a voice to a painting in the shadow of The Night Watch. ‘Everybody insists on seeing me as a copy, but I can assure you that an obsession with the past isn’t healthy.’

Cesar Majorana (b. 1996) is a writer and presenter. He writes a weekly column for glossy magazine &C about the likes of depression and expensive scented candles. On Dutch Radio 1 he can be heard on the programme Druktemakers, getting worked up about topics like the bees in Cuba. His writing has appeared on online platforms including DeFusie and VICE. His fetish is to have people bury dead goldfish in his mouth, which nobody ever agrees to. 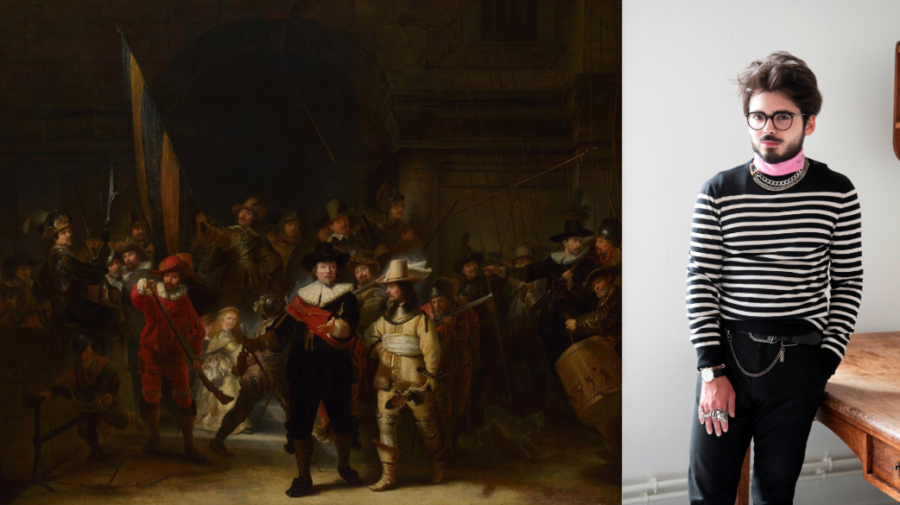 Confessions of a Copy

Behold The Night Watch, the macho star of the Rijksmuseum. See the smaller, more comprehensive copy of the night watch beside it. She watches as The Night Watch is photographed, the culmination of every tour and the main destination of many a museum visit. What does she have to say? If you want to hear her story, then take a deep breath and do as you’re told.

It may be a strange question, but would you mind moving a little closer? So you can see the texture on my skin, the carvings on my frames' edges? Please, move close enough so you can smell my coats of paint.

Now imagine handling me, touching the fibres of my skin, dragging your fingers along the edges of my frame. Feel how I carry my varnish.

People say:
Behind every successful man there’s a ...

People never say:
Most women stand in the shadow of a man.

I’m not naïve, you know. I do understand there are differences between paintings and their copies. Between men and women. One such difference is that I cried once, when someone said that I had merit. He would rather not cry in public.

Not even when a man with a kitchen knife stood in front of him, shouted ‘I’m the Messiah’ and stabbed him straight through the heart. He’s above that. He has to stand tall.

At any rate, over the years nobody has felt compelled to slash me with a kitchen knife. My greatest injury is the constant awareness that nobody is interested in attacking me.

I laugh when people ask why I look so angry.

I wonder if I’m a copy of an original that doesn’t even exist anymore. A mask that conceals nothing.

Now that you’re standing here, you must have noticed. I have more to offer. Go on, admit it. I saw you looking and you can see it. The brush strokes on my left and at the top are ones that he has lost over the years. You noticed, right? I’ve not been trimmed and cut to size. History never repeats itself, but is always reborn somewhere. It comes back in new forms. It’s given a mask to wear and carries the past within itself.

What if you had a knife. I mean, it’s possible, for you to have a knife in your hands right now. Would you be prepared to sink it into me? Break my surface tension? Do you think I’m important enough for an act of murder?

Everybody insists on seeing me as a copy, but I can assure you that an obsession with the past isn’t healthy.

It will feel good. Like a heroic deed, when you pause this repeat performance. I can immortalise you, if you free me from the same immortality.

Stand before me and raise your hands in the air.

Shout: ‘we’re all a copy of something greater.’

And then plunge the knife into me.