Publications
Cultural Attaché Joost Taverne in New York: 'The U.S. Is a Very Interesting Country in the Field of Art and Culture'
0 Comments
delen
The Cultural Attaché

Cultural Attaché Joost Taverne in New York: 'The U.S. Is a Very Interesting Country in the Field of Art and Culture'

The Cultural Attaché is a series of interviews by DutchCulture, the Dutch network and knowledge organisation for international cultural cooperation, with cultural attachés of the Netherlands. How do these attachés help Dutch art and culture? What were their expectations when they were posted abroad, and what challenges have they faced? This edition: Joost Taverne in New York.

Joost, could you start by painting us a picture of the Consulate General of the Kingdom of the Netherlands in New York, where you hold the position of cultural attaché?
Joost Taverne: 'At the Consulate General in New York, I am one of three diplomats. There is the Consul General; his Deputy and Head of Economic Affairs, and there is me. My main responsibility is helping to strengthen the position of Dutch arts and culture, and creative industry, in the United States. Besides the Consulate General in New York, we have an Embassy in Washington, DC, and Consulates in Chicago, Miami, San Francisco and recently opened Atlanta, that I cooperate with. My team consists of Robert Kloos, Vera Kuipers and Sophie van Doornmalen. They are the subject matter experts in their respective fields. Furthermore we have two interns, who focus on our dynamic social media presence and research.' 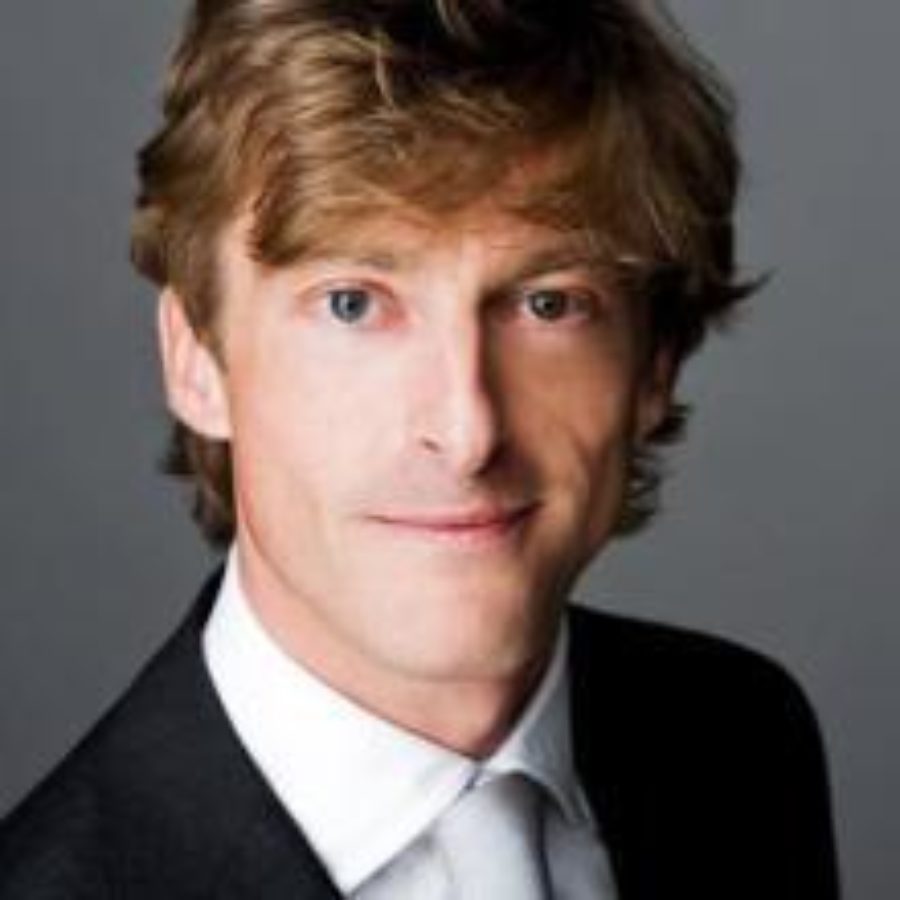 This is your first time as a cultural attaché, but I believe that you have experience with both the Dutch Ministry of Education, Culture and Science, and the United States?
'I do. Previously, I have been posted at our Embassy in Washington, DC, where from 2006 till 2010, I served as Counselor for Education, Culture and Science. This position also involved international cultural policy; however, it was more on a government to government level, focusing on the cultural cooperation between the Netherlands and the United States. Of course, in the U.S. cultural policy is structured very differently compared to The Netherlands, since there is no Minister of Culture. At the same time, the developments here are very interesting for us, like the way private funding contributes to arts and culture.

Our starting point is U.S. demand and match that with the cultural offerings of the Netherlands

In my current position, I am much more involved with the practical implementation of our objective to strengthen the position of Dutch arts and culture in the U.S.. A very important aspect is connecting American and Dutch parties. Our starting point is U.S. demand and match that with the cultural offerings of the Netherlands, through our system of independent foundations. These foundations are the experts in their respective disciplines. Being on the ground in the U.S., we work hard to expand our network and build long-term relationships with institutions, companies and decision makers who have a keen interest in what our country has to offer.'

And are you enjoying that task?
'Yes, I enjoy it a lot. The U.S. is an incredibly interesting country in many ways, not in the least in the field of arts and culture. An unbelievably varied country. The U.S. being a federal state, also means there can be huge differences between the states. For better understanding we shouldn’t look at the U.S. as just a large country, the way we look at France or Germany for example, we should look at the United States the same way we look at the European Union. The autonomy of the different states can be large, much larger than we in the Netherlands sometimes realize. This goes for dealing with arts and culture, but also the cultural differences between the states can be profound. You must acknowledge these differences, in order to be effective in achieving your goals.'

The developments here are very interesting for us, like the way private funding contributes to arts and culture

Which moment from the past year and a half makes you proud? Do you feel proud when you see Dutch successes in the U.S.?
'I believe that we are here to enable others, in this case Dutch arts and culture professionals, to be successful in the U.S.. I could name so many examples, Joris Laarman has successfully exhibited his work here, costume designer Iris van Herpen of course, Dutch writers that make it here. The permanent connection of Jaap van Zweden to the New York Philharmonic has been astonishing. The way he has been received there was majestic and very important for the image of the Netherlands in New York, maybe even beyond. Even though we weren’t directly involved in that, it is a great opportunity for us to join that success by programming new Dutch composers and Dutch music under his wings (Art of Andriessen).

Just as delighted am I to see the possibilities that young Dutch filmmakers have received to show their work in L.A., during the film festival of New Filmmakers LA, and make connections there. This opens opportunities for them upon returning to the Netherlands and will help them towards an international career. It is of course hard to measure this impact, but we can follow these talents and see the causal link with what they experienced here. It also shows the impact and success of the international cultural policy.' 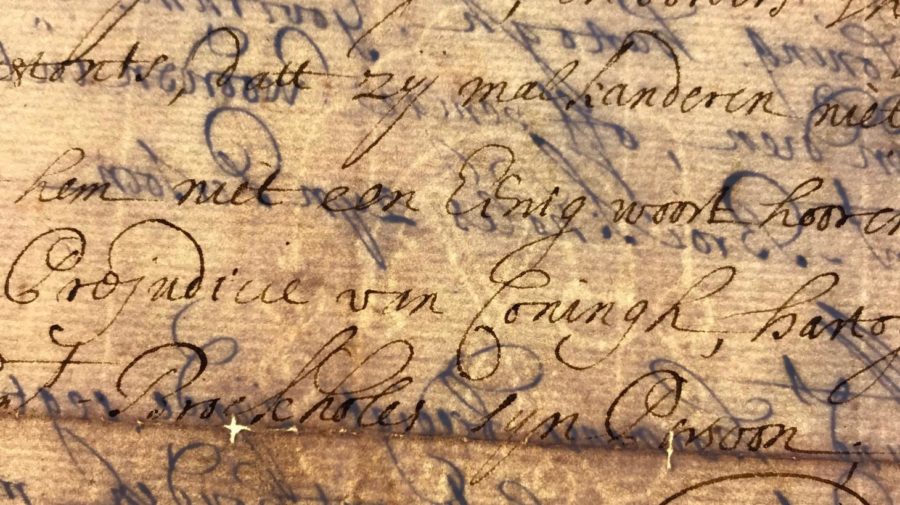 Dutch document with watermark, analysed by paper conservator Michele Philips. The document is an example of 17th century artifacts that tell the story of the Dutch settlers in New Netherland. Shared Cultural Heritage between the U.S. and the Netherlands is a focus discipline for the Consulate General in New York. © Collection of The New York State Office of Parks, Recreation and Historic Preservation.

Can you tell me something about the challenges you face?
'An important challenge is trying to be active in all the areas that are important for the Netherlands, to be present regularly and to keep broadening our networks. And to stand out as a country from the rest. Those who aren’t the biggest, or the strongest, must be the smartest! The competition in this country is obviously overwhelming. If you can beat the competition here, you will have a global seal of approval. It takes quite a lot however! It takes preparation, endurance, working incredibly hard and having a bit of luck.

In this sense, I really recommend thinking about roads less travelled. Depending on your discipline there are some obvious roads to take. Everyone wants to be in New York, filmmakers go to Los Angeles, and Miami is the place for design. In many cases it can be smart to think about less obvious destinations to set foot in the U.S., cities with less competition so it will be easier to make a difference. In my experience this can be very effective and can improve your chances for success. Once you figured out the country and the market, you can move on to bigger cities. I see it as part of my work to help Dutch people and institutions make the right choices on how to succeed in the United States.'

After successful editions in 2016 and 2017, Ventura New York looks back on a great exhibition this year (2019) in which presented 17 designers, studios and brands with a specific focus on Dutch contemporary design. Videoproduction by MANUFOTO LCC

Are you not bothered by FOMO (fear of missing out), seeing how there is always more to do, people to meet, places to get to know? How do you deal with the fact that the work is never really finished?
'Yes, I understand what you mean, and it might be very tempting sometimes. However, we have frames we operate in, a strategic policy plan and the annual plans of the embassy that lay down the structure for our involvement in arts and culture for our diplomatic network in the U.S. as a whole. Within our team we also draw up an agenda each year in which we specify what we want to achieve and how. This way we can check the boxes at the end of the year and have a good overview of what succeeded. These things really help to bring some order in all the opportunities and possibilities.' 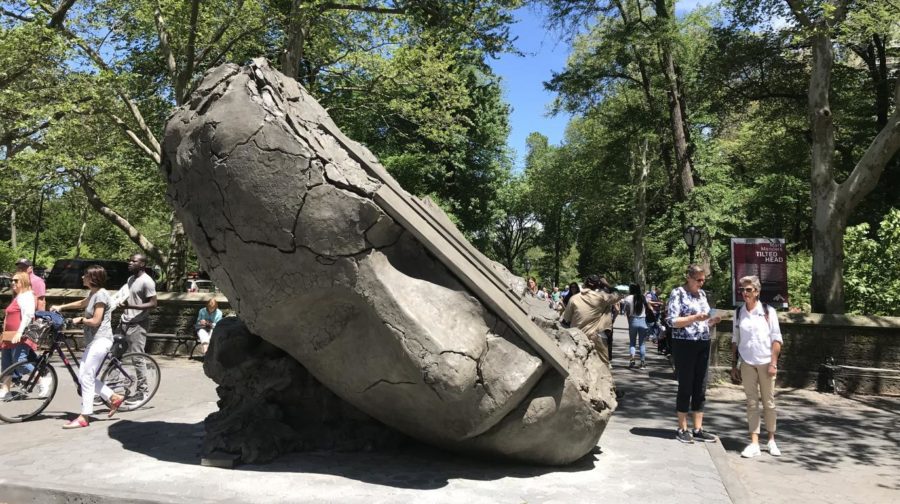 A great team, a tight plan and an effective strategy, those seem to be the main things.
'For sure.'

And how do you make sure that the team sticks together while working on this high speed?
'Well, for starters our people are highly qualified. The team is small, so we know how to find each other, and work effectively. Each Monday we start the week together, including the interns, and we share what everyone is working on, which events are happening. This way we know where to connect or join an event, but we also make sure we can substitute for each other if necessary. Having the opportunity to work with this great group of people on these incredibly interesting and inspiring fields of arts and culture in the United States, being based in New York, is just wonderful and gives me a lot of energy.'