Eighteen young authors have brought nineteenth-century artefacts from the Rijksmuseum to life. They have taken inspiration from the question: what do you see when you look at these objects with an eye for invisible labour? We join Dagmar Bosma as she questions a cabinet made by Charles-Guillaume Diehl in c. 1867 – c. 1880. ‘There can be no cross-fertilisation on the arid soil of pillage and exploitation.’ 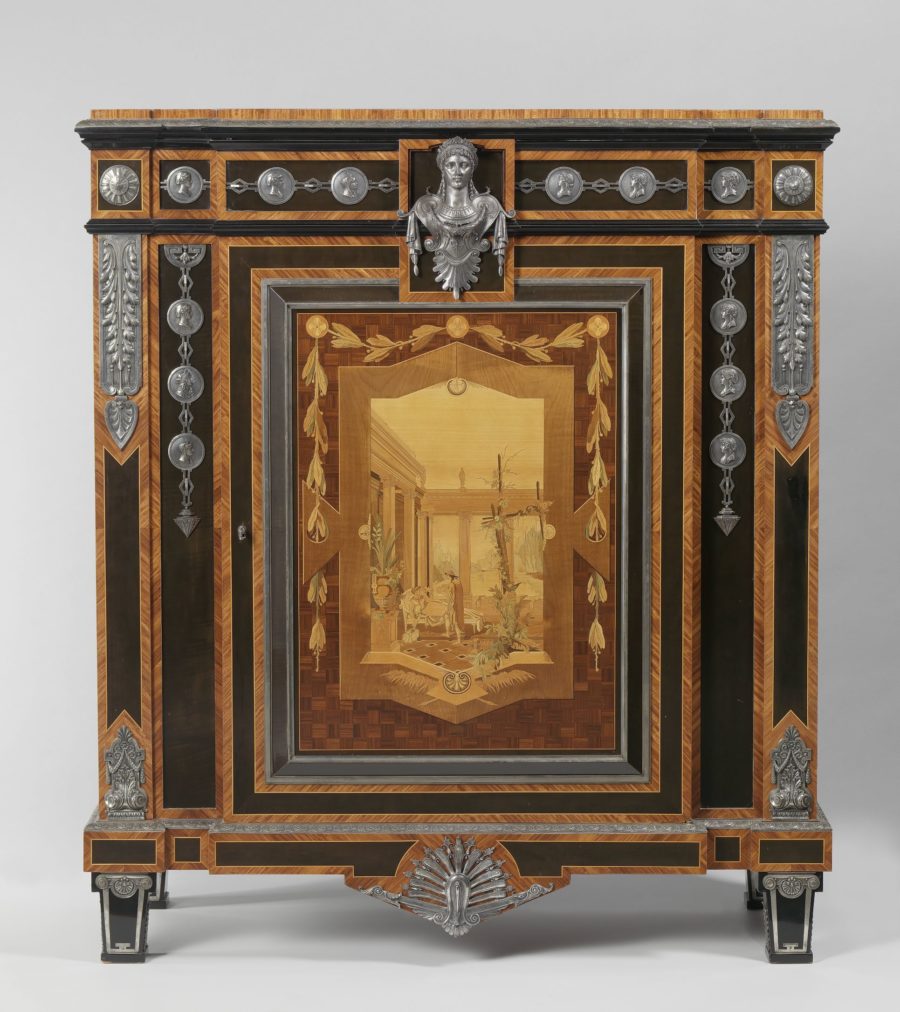 Additional information (identification of a flaw)

The 1867 World’s Fair in Paris featured an earlier version of this cabinet, made especially for the occasion and even more lavishly decorated, with realistic silvered bronze oxen heads on either side. This is a somewhat simpler version of that centrepiece.

The writer Mark Twain was at the exhibition in his capacity as a reporter. He may well have walked past the cabinet’s predecessor. But his interest lay elsewhere:

‘It was a wonderful show, but the moving masses of people of all nations we saw there were a still more wonderful show. I discovered that if I were to stay there a month, I would still find myself looking at the people instead of the inanimate objects on exhibition. I got a little interested in some curious old tapestries of the thirteenth century, but a party of Arabs came by, and their dusky faces and quaint costumes called my attention away at once.’

The ‘people watching’ wasn’t limited to passers-by: this was the first ‘Exposition Universelle’ at which living people from the colonies were on display.

After 1867, ‘zoos humains’ became a regular fixture of the world fairs in Western European metropoles. For months on end, large groups of people would live in enclosures in model villages. During Expo 58 in Brussels, too, living people were exhibited like objects.

In its ‘1800-1900’ catalogue, the Rijksmuseum describes the world fair as fertile ground for industry, science and the arts and crafts, saying, among other things,

‘The world fairs were the leading platform for presenting and studying the latest developments in industry and science. In enormous halls, new inventions, faster manufacturing processes and modern reproduction techniques were demonstrated and patents sold. Fierce competition pushed participants to show themselves from their best side. The arts likewise benefited from the international exchange and cross-fertilisation.’

The human zoos don’t get a mention here. There can be no cross-fertilisation on the arid soil of pillage and exploitation.

How much emptier would the Rijksmuseum be without colonial appropriation?

This cabinet is made of various types of wood, including mahogany and purpleheart.

Mahogany and purpleheart had their roots in tropical soil. Grew leaves. Were cut down by the enslaved. Uprooted from the ground. Shipped to Europe. Handled by many. What was alive was made into an object.

Contemporary US artist Cameron Rowland wrote about the colonial import of mahogany: ‘It is one of the few commodities of the triangular trade that continues to generate value for those who currently own it.’

Don’t look back on this ‘past’ as if it’s static or dead, because it lives on; it keeps posing quandaries, it’s a deep-rooted problem.

The three people on the board of the Rijksmuseum are all white and earn a top salary. Reparations for the colonial past and the history of slavery can’t be made without undermining the institutions embedded in them.

Such undermining was part of Rowland’s solo exhibition at the Institute of Contemporary Arts in London. The gallery is housed in a building owned by the Crown and generates direct rental income for the British royal family. Rowland mortgaged the building’s mahogany doors and a handrail. The debt will not be repaid, so the royal property will decrease in value. The loan will be defaulted.

Dagmar Bosma (b.1994) is an artist, writer and programme maker. In the summer of 2021, they completed their Master of Fine Art degree at the Piet Zwart Institute in Rotterdam with work exploring the transformative character of decay. Dagmar is one of the editors of literary journal nY and a coordinator at Page Not Found, a space for publishing as artistic practice.  They have written essayistic and poetic texts for Shimmer, Mister Motley and Tubelight.