Eighteen young Flemish and Dutch authors bring an artefact to life from the Slavery exhibition at the Rijksmuseum in Amsterdam. In this short story Esha Guy Hadjadj gives a voice to a military painting by Cornelis Troost. 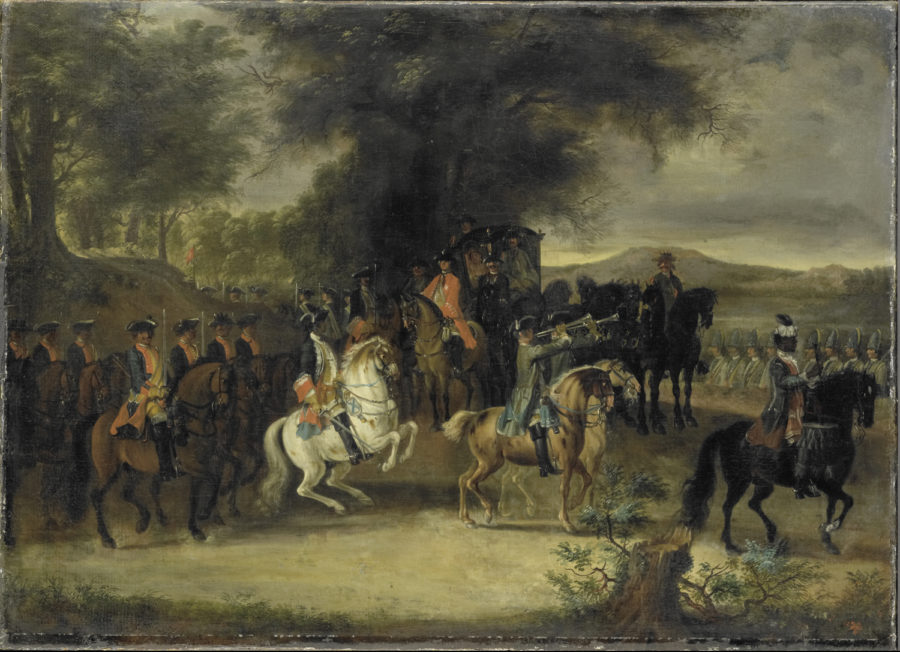 Whose idea was it to record a musical exercise with a brush? To me the difficulty of this drill lies in the rhythms and streamlined moves. If I fail to hit the kettledrum in time, there will be no order in the regiment. I bring unity, turn dozens of horses and men into one body. At the same time, I have to control my horse with my legs. I would like to see somebody else pull that off. And yet those peacocks in their carriage chose to hire a painter. Not even a writer! Because they insist on flaunting their military splendour, because they’re only interested in the way they are perceived.

If only they had given me a writer. In that case the beat of the drum might have found an echo in words. The writer could have spoken of the shrill trumpets, the puckered lips spluttering and blaring into my ear. After years of drumming on horseback in front of those proud blowers I can even hear them ringing in the stillness of my deepest sleep, a hellish whistling tone that never leaves me alone.

I keep my back straight, as it’s all the painter can capture. Behind me, a horse rears up, and the sky in front of me hints at an imminent thunderstorm. How long have I been at the head of this procession now? And still I spend every break on my own. They dress me in strange clothes, take me to strange lands and lift me onto strange horses. They make me the leading principle of their regiment, yet I am powerless even while playing. Purely because I am thought to have an innate sense of rhythm.

Who am I kidding? What could a writer have done for me? He would not even hear my voice; he would simply make the whole thing up. He might make me proud, and melancholic. But I would not have recognised the character he bestowed on me. Nor the history he ascribed to me. The sincerest effort to speak on my behalf would silence me once and for all. To both him and the reader I would be no more than a curiosity – tragic, possibly – leading a procession in which he effectively comes last.

In that case I would rather be hitting the kettledrums harder and concentrate on the knot in my stomach or the weight of the collar round my neck. A painter is not so bad, after all. He documents me, but at least he does not claim to understand me. My face masks an interior, shuts me off from the stories a writer might read into it. Hopefully, the viewer who looks at me in peace and prosperity later will not think that this canvas brings her closer to me. With a bit of luck she will realise just how shallow canvases or texts ultimately are. However many perspectives they evoke, any depth remains on the surface, the distance unbridgeable.

Freelance journalist and writer of short stories. His work has appeared in publications including the Nederlandse Boekengids (the Dutch Review of Books), Oneworld.nl and literary journal ZINK. Together with Pelumi Adejumo he has translated poetry for Terras magazine. He is also the head of current affairs at Hard//hoofd and is writing his MA dissertation on the politics of translation in a post-colonial world.