In her third column on polarisation and distrust of the establishment, Hind Fraihi finds climate extremism takes her to the resurgence of anti-Semitism. Because, when extremists get lost in their radicalism, they throng together in anti-Semitism as if it were a common landmark. That is an evil development, but don’t start shouting that ‘we’re back in the 1930s again’, writes Fraihi. That sort of warning is counterproductive and even risks gaining the status of forbidden fruit.

The past is not over. In the sort of polarising times we are living through these days, reference is all too often made to the 1930s. Not infrequently, people draw parallels with Nazism and do not shrink from relativizing the atrocities carried out by Nazism. That happened not so long ago, and it came from an unexpected corner: climate activism, which is perceived as leftist or has been highjacked by the left. Roger Hallam, one of the founders of Extinction Rebellion © Wikipedia

Roger Hallam, one of the founders of the radical climate movement Extinction Rebellion (XR), referred to the Holocaust as ‘just another fuckery in human history’. In an interview with the German Weekly Die Zeit in late 2019, he relativized the Holocaust in a variety of ways.

After a lot of controversy and various XR branches taking their distance, Hallam claimed apologetically that his comments had been taken out of context. ‘I want to fully acknowledge the unimaginable suffering caused by the Nazi Holocaust that led to all of Europe saying, “never again”.’

And he continued, ‘But it is happening again, on a far greater scale and in plain sight. The global North is pumping lethal levels of CO2 into the atmosphere and simultaneously erecting ever greater barriers to immigration, turning whole regions of the world into death zones. That is the grim reality.’

He added, ‘We are allowing our governments to willingly, and in full knowledge of the science, engage in the genocide of our young people and those in the global south by refusing to take emergency action to reduce carbon emissions’. Ecocide, that is what Hallam is actually talking about. The concept refers to the large-scale destruction of nature and its ecosystems. Climate activists, including Greta Thunberg, are demanding that ecocide should be punished as an international crime at the International Criminal Court.

Ecocide, Nazi genocide, not much to choose between them? The Holocaust was the systematic extermination and persecution of Jews by Nazi Germany during the Second World War, yet no more than an historic reference point? A point of comparison even? It’s happening again, says Hallam about global warming, but on a larger scale and openly.

Measuring absolute evil has no place in a comparison table. Yet the Holocaust must stand up to the Armenian genocide, or the one in Rwanda, or Kosovo, or Darfur and the atrocities carried out in various European colonies. As if, somewhere on a moral timeline, an Olympiad of horror is taking place where, according to climate extremists like Hallam, the demise of the Earth is taking its place on the podium as the great winner. The losers are invariably the same: the Jews. For extremists of all kinds, Jews are the unmistakable target. When extremists wilfully lose themselves in their all-pervasive radicalism, they throng together in anti-Semitism, as if it were a common landmark.

Is it crowded there? You bet it is. In November alone there were two clear examples. In a jihadist terrorist attack in Vienna, the shooting started close to a synagogue. Fortunately, it was closed at the time. In a jihadist terrorist attack in Vienna, the shooting started close to a synagogue. © Wikipedia

Anti-Semitism is no less unfamiliar from another quarter with the 1930s as its touchstone. Carrera Neefs of the far-right Flemish party, Vlaams Belang, laid flowers at the grave of an SS member on Armistice Day. Neefs shared her tribute on her Instagram account with a few photos on which she visits Ysselsteyn cemetery, a German military graveyard in the Netherlands. She poses at the grave of Willem Heubel, a notorious Dutch Nazi. Carrera Neefs laid flowers at the grave of an SS member on Armistice Day. © Image via Instagram

‘In war there are always several sides. I’m not a denier, but I don’t forget these people either’, she wrote in her message, looking into the camera with a saccharine smile. Ms Neefs dressed strikingly for the occasion, in traditional German dress. A twee dirndl. (As a result of this action, Carrera Neefs would later be dismissed from Vlaams Belang, ed.)

For some people, the past is certainly not over. Muslim extremists hark back murderously to the seventh century, while far right-wingers haul themselves back into the misplaced folkloric romance of the 1930s. Les extrêmes se touchent, not least at the intersection that constitutes anti-Semitism. And the result is deplorable. The number of anti-Semitic incidents in Europe in the past year has increased considerably.

But perhaps the centre is giving the extremes a bit of help? ‘The 1930s are back’, people say. Parallels are drawn, comparisons made. But they are actually too highfalutin to demonstrate any effectiveness in the fight against contemporary anti-Semitism and everyday racism. Immobilism is avenged with a host of conspiracies in which the eternal “enemy” plays a role. According to one widely shared message in the app groups of the JFVD (the youth movement of the Dutch party Forum for Democracy), for example, ‘Jews have international paedophilia networks and push vast numbers of women into pornography’. The ensuing outcry prompted the JFVD’s leader, Thierry Baudet, to withdraw from his place at the top of the list for the upcoming elections and as party leader.

And that is just the tip of the iceberg. The Dutch Centre for Information and Documentation Israel (CIDI) has been registering anti-Jewish discrimination for the last thirty years. There have never been as many reports of anti-Semitism as in 2019. The previous peak year was 2014. ‘At that time, the rise in anti-Semitism was related to a flare-up of the conflict between Israel and Hamas in Gaza. There was no such link in 2019’, according to CIDI.

Warnings about the 1930s are in danger of having a paradoxical effect. They are in danger even of gaining the status of forbidden fruit. Hatred of Jews is becoming good form, and this is evident in all sections of society. Both individuals and social movements are guilty of it. As are politicians – and not necessarily those on the far right. Former Labour leader Jeremy Corbyn was suspended for allegedly having been too lax in dealing with anti-Semitism in his own party.

Links are outdated, but the past is in.

In uncertain times, rear-view mirrors strengthen both individuals and groups of extremists in their search for solutions. They find them in a past that seems as clear as daylight. Utopianly crystal clear.

In the ultimate reaction against extremism, references to the 1930s are frightening in their simplicity. They betray the lack of a forward-looking mirror. Those who constantly make alarming references to the grotesque events of the past are masking a lack of solutions for a purposeful policy for the future.

Hind Fraihi holds the Willy Calewaert chair at the Vrije Universiteit in Brussels (VUB). The chair organises a four-part series of lectures entitled ANTIPODE, which focuses on escalating polarisation driven by the far-right, decolonisation, Islamism and climate issues. Each one of those topics is currently a hot potato, which could lead to a social divide, causing one group to become the very antipode of the other. In her four columns, Hind Fraihi zooms in on another antipode. ANTIPODE is realised in collaboration with the August Vermeylenfonds, PEN Vlaanderen, and the Hannah Arendt Instituut. 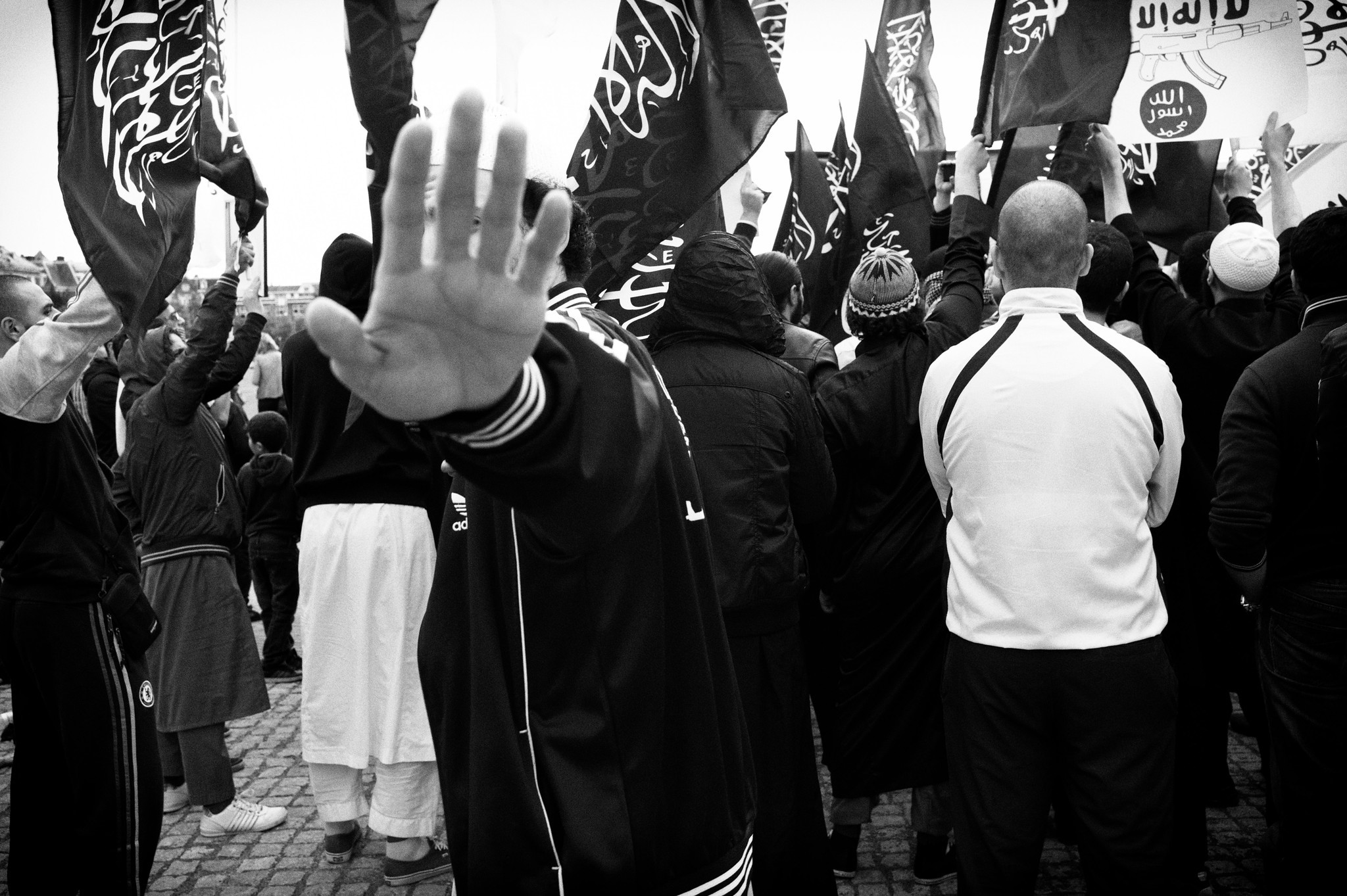 How Muslim Extremists Bring Jihad to Our Streets and Classrooms