An important name is missing from the collective Dutch sports memory. Rie Mastenbroek (1919-2003) was, in the 1930s, a lauded swimmer of whom the entire country was proud. But after the war, her name fell into oblivion. Mastenbroek won four medals at the 1936 Olympics, which went down in history as a propaganda event for the Nazis.

Rie Mastenbroek was born upstairs from her grandparents’ pub in the centre of Rotterdam. Her mother was eighteen and unmarried, her father was absent. When she was five years old, Rie took her first jump into the water of the local, free, public swimming pool. She floated like a cork, which was fortunate because although swimming was of vital importance in the port city, there was no money for swimming lessons.

At age ten, Rie moved with her mother to the Tuindersstraat, where the only covered swimming pool in Rotterdam could be found. Rie ran errands for the cashier in exchange for some time in the water. It was here that the successful national coach, Ma Braun, instructed her pupils: female swimmers who competed internationally. Rie, being mischievous, used to wait underwater for the diligent backcrawl swimmers to pass, then jerk them down. When Ma Braun saw this, Rie was sternly reprimanded and had to swim a length under the critical eye of the coach as punishment. Chagrined by the scolding, Rie swam as fast as she could. That was enough: Ma Braun promised to make an Olympic champion out of Rie and included her in her swim team.

Rie enjoyed the swim training sessions, which allowed her to release her pent-up energy and make friends with the other swimmers. She was not elegant: but vigorous and fierce and able to deliver a great final sprint. Soon she was travelling every weekend to swimming pools in the Netherlands, Belgium and Germany to participate in competitions. 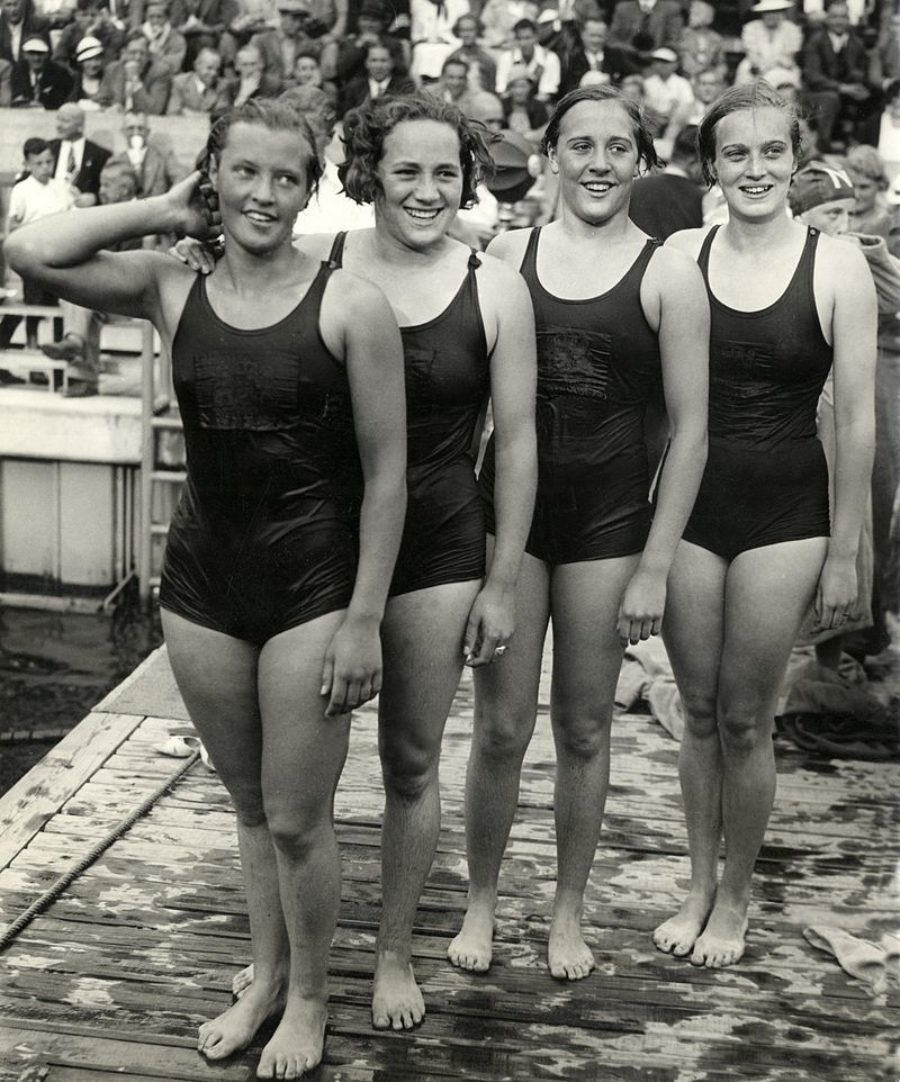 Rie combined school with her progressively intensive training sessions. Her zeal paid off. In August 1934, at the age of fifteen, she was selected for the European Championships in Magdeburg, Germany. During the train journey there she menstruated for the first time. She had no idea what was going on and Ma Braun was not sympathetic. Female issues were not discussed openly at the time and there was no form of medical supervision for the athletes but, fortunately, the strict dress code of the Dutch Swimming Federation saved the day. In her black, woollen, legged, swimsuit and swimming trunks with a bandage underneath, Rie managed to hide her menstrual period and win four medals: gold in the 100 m backstroke, the 400 m freestyle and the relay; and silver in the 100 m freestyle. Rie became quite famous after this and with her spontaneous, cheerful quotes she conquered many hearts.

The Netherlands was proud

The 1936 Olympic Games in Berlin offered Rie the possibility to compete on a global level – since at the time there were no other world swimming championships. However, three years earlier, Hitler had been elected as the German Chancellor and his campaign of discrimination and persecution against Jews in Germany had not gone unnoticed. Still, the International Olympic Committee felt - after the necessary deliberations - that sport and domestic politics should be kept separate and so the global sports world travelled to Berlin in August 1936. The deliberations had completely passed Rie by. Her life consisted of school and swimming with no room for politics. 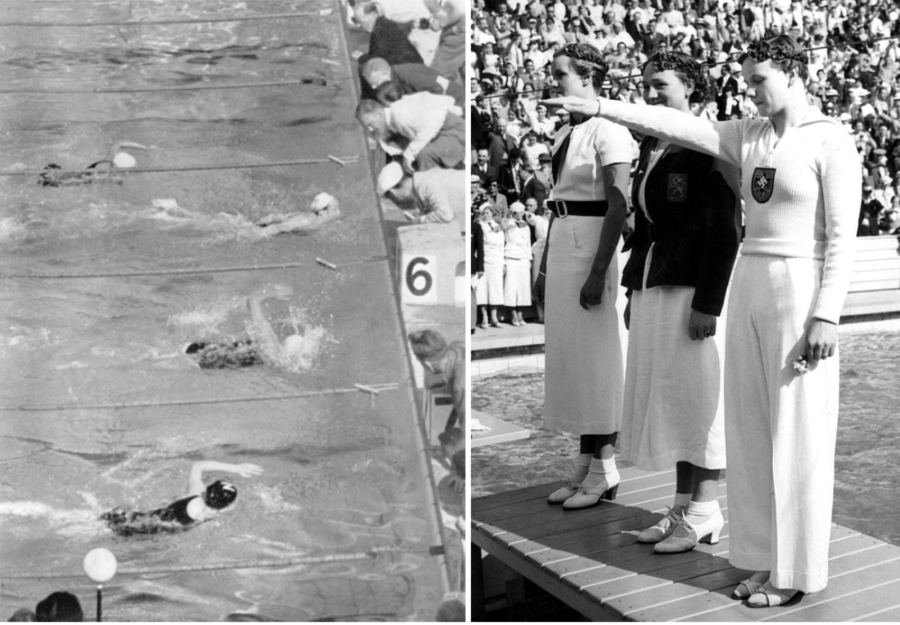 So, on 13 August 1936, there she was, standing nervously on the starting block for her first Olympic final: the 100 m freestyle. She started badly, swam into the lane buoys, turned inefficiently and, 75 meters in, was in fourth place. A win seemed impossible. But ten meters before the finish, the situation changed dramatically. With her arms beating faster and faster through the water, Rie made a phenomenal sprint and won the race! During the awards ceremony, she stood proud and smiling between the Argentine, Campbell, and the German, Arendt, who gave the Nazi salute. It was a moment that would haunt Rie for the rest of her life.

The same week, she also won gold in the 400m freestyle and 4 x 100m freestyle, and silver in the 100m backstroke. Rie Mastenbroek and her four medals were world news. She had made the Netherlands proud, and they wanted to show their appreciation. 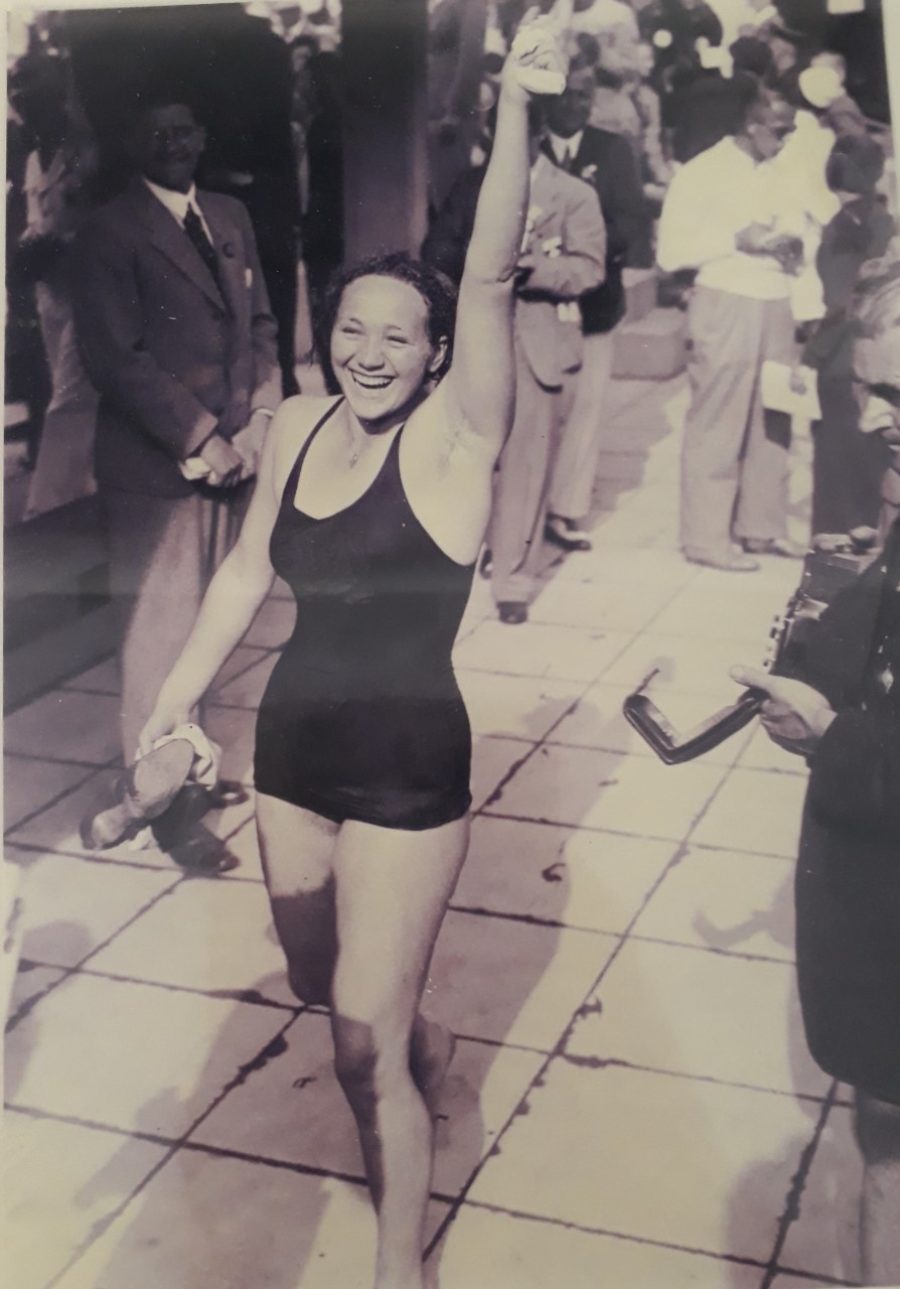 The train ride home became a truly triumphant journey. All along the route people stood to welcome their heroine. At every station, Rie signed endless autographs, listened to speeches and songs, received bouquets and fruit baskets and shook countless hands. In Rotterdam, people stood in rows, shouting and waving flowers, banner, flags and fireworks. Sober Rotterdam had been transformed into a buzzing city and the ecstasy lasted for weeks. Rie's home was besieged by fans and paparazzi recorded her every move. The working-class girl had become public property.

The parting of the ways

Rie Mastenbroek's Olympic success served as a wonderful promotional tool for swimming, generally. As a result, the Dutch Swimming Federation imposed a tight schedule on Rie, full of events. But she was tired. At seventeen, she needed time for rest and reflection but it was impossible for her to escape her obligations to the Federation. To help Rie with her busy schedule, Ma Braun took her in. But Rie was still a minor, so the swimming coach had to ask permission from Rie's mother, who knew nothing about professional swimming, before each event – an impossible situation. Braun therefore demanded that Rie be removed from her mother’s custody, with the result that Rie’s mentor and mother came face-to-face in court. The judge did not hesitate for a moment, ruling that Rie should remain in the custody of her biological mother.

Because Mastenbroek was earning money with her sport, the Swimming Federation declared her a professional, which meant that she was no longer allowed to swim competitively.

The custody dispute led to a painful split between coach and swimmer. Rie tried to continue her swimming career but struggled to find motivation. She took a job as a swimming instructor but that meant that, technically, she was earning money with her sport, so the Swimming Federation declared her a professional, which meant that she was no longer allowed to swim competitively. Rie initially shrugged this off until 1938, when she worked as a nanny in Antwerp and her pleasure in swimming returned. Her status as a professional had not yet been confirmed at that point so she hoped to be able to compete again. Unfortunately, the swimming federation was adamant. Rie felt abandoned and never swam again.

Years later, as the world became aware of the atrocities committed by the Nazis, the realization dawned that the 1936 Olympics had been a smokescreen. The Netherlands had been misled. By attending the Berlin Olympiad, the Netherlands had become part of the propaganda of the Nazi regime. They did not want this association, nor did they want to be associated with the four medals won by their formerly beloved swimming star. They preferred to look ahead. Reconstruction was the order of the day. 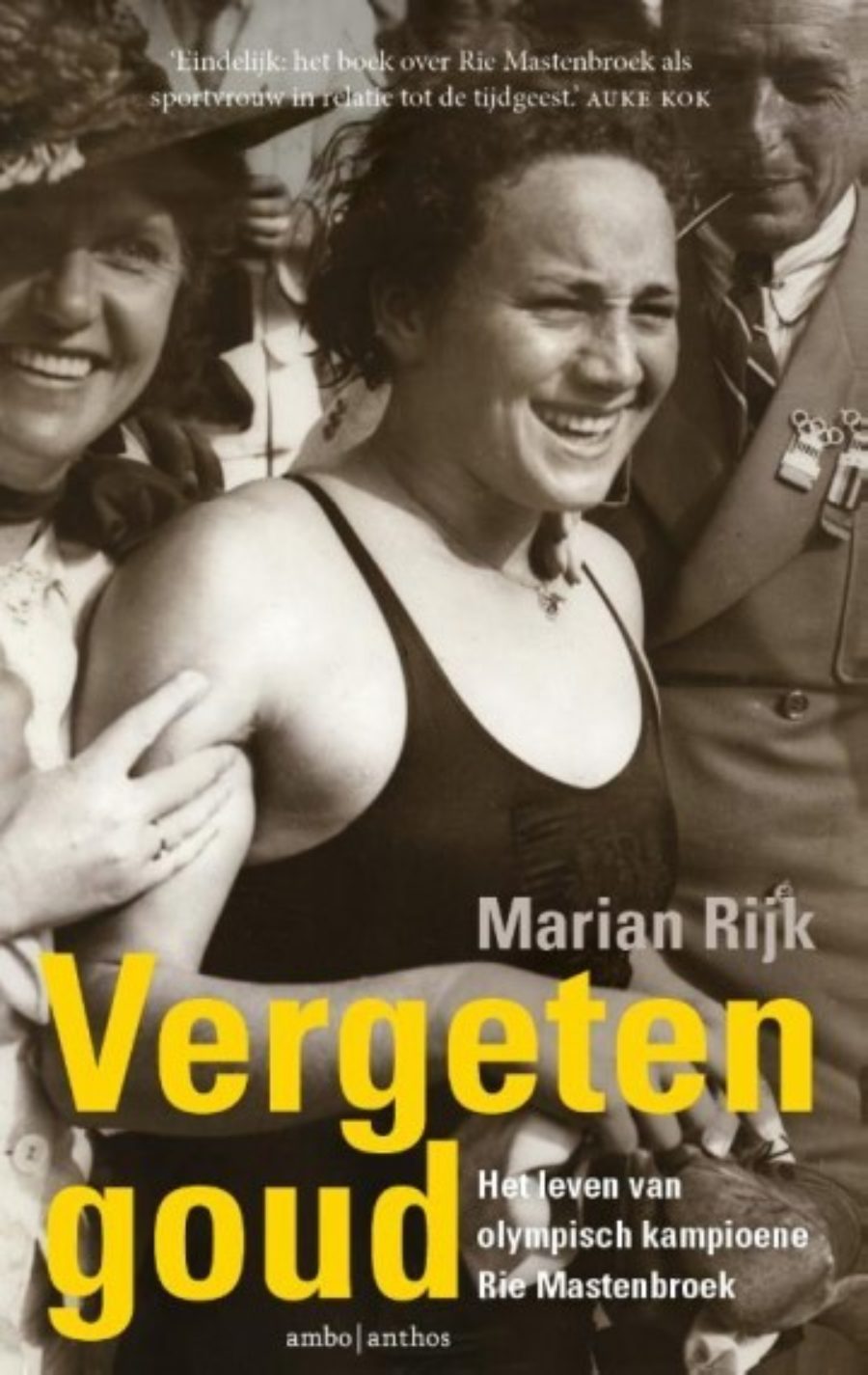 Nevertheless, every four years in the run-up to the Games, journalists showed up at Rie's doorstep. They were genuinely interested in her historic successes, but they were intensely curious about one thing: ‘What was it like to swim for Hitler?’ Patiently, Rie explained that she had not been concerned with politics, but with her sport. Her answer seemed to fall on deaf ears, though, because four years later they would ask the same questions again, and then again. Her patience gave way to bitterness at the knowledge that she would never completely escape the stigma of the “Hitler Games”.

There has, however, been some recovery in recent years. One hundred years after Rie Mastenbroek's birth, the 50-meter pool at the Rotterdam Swimming Centre was named after her. Since then, the Rie Mastenbroek memorial has been held there annually, in the place where the children of Rotterdam take their swimming lessons.

Last year, my book Forgotten Gold: the Life Story of Rie Mastenbroek was published by Ambo/Anthos.