FROM THE ARCHIVES: The Language Border in Belgium

Once in a while, editor-in-chief Luc Devoldere dives into the archives of The Low Countries and pulls out a story that is worth rereading. Consider it left luggage, that reveals a hidden gem. This week: the language border in Belgium.

Now that countries are slowly opening up their borders, I’m thinking about our 2013 yearbook The Low Countries, in which we talked about “the Unbearable Lightness of Borders”.

I wrote the following about it:

'Borders shut up and shut out. They limit and keep dull. According to the mantra of false cosmopolitanism, that is. But suppose all borders were contingent: they are where they are, but could have been drawn differently. Those who constantly want to discuss them and tinker with them open Pandora’s box. Borders do indeed limit, but only in the sense that they determine what we are and are not. They make the ‘other’ possible. And isn’t the paradox of borders that you must accept them if you want to transcend them? Recognised borders are the best conceivable vaccine against the epidemic of walls, said Régis Debray in Éloge des frontières (Gallimard, Paris, 2010).'

I still hold this statement true.

In that issue of The Low Countries, I bumped into a piece by Geert van Istendael about a special kind of border: a language border.

Belgium has one of those. What's more, Belgium wouldn't exist today if that language border hadn't been established in 1963.

His article is still standing. Like a border stone. Only Jan Peumans is no longer president of the Flemish parliament.

Read HERE the entire article that was previously published in the 2013 yearbook The Low Countries № 21. 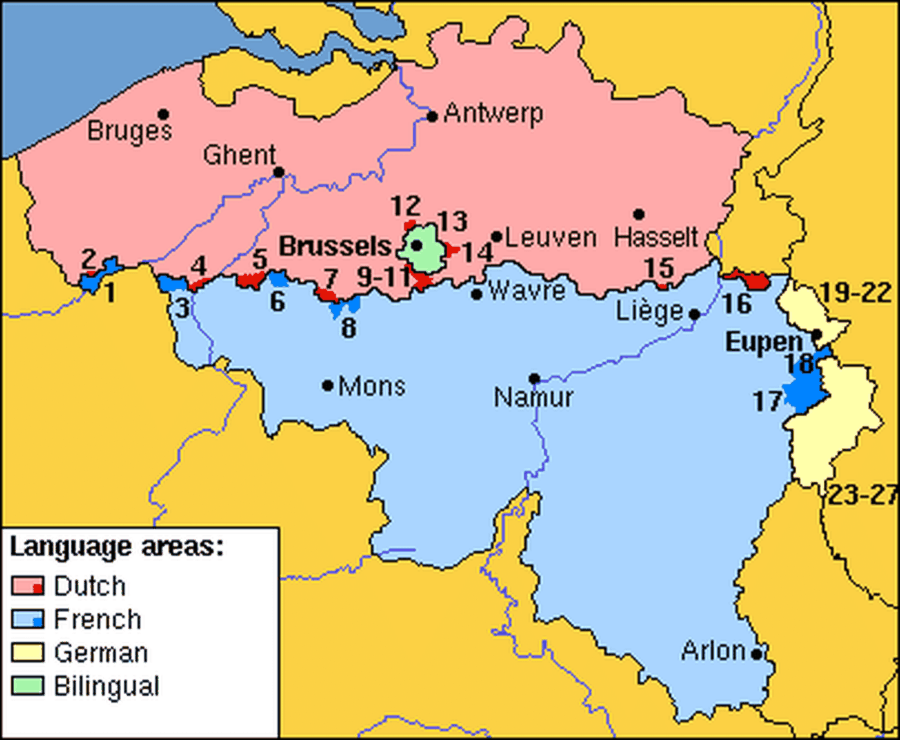 Map showing the language borders in Belgium today, declared in 1962. Pink denotes the Flemish region and the Dutch-speaking area. In its heart, in green, lies bilingual Brussels. The French-speaking area is in blue and the German-speaking area in yellow, together forming the Wallonian region. © Gpvos/Wikimedia Commons