At the request of the Flemish-Dutch House deBuren eighteen young Flemish and Dutch authors each brought a painting from the Rijksmuseum back to life. They wrote a new text about an old work from the Gallery of Honour, based on one key question: what do you see when you look at these paintings through gender glasses? Iduna Paalman wrote a poem about the rise and fall of Maria de’ Medici to accompany a militia piece by Joachim von Sandrart. ‘I’ll be met with a casserole of velvet.’

Iduna Paalman (b. 1991) writes poetry, prose and drama. Her work has appeared in De Gids, Revisor, Het Liegend Konijn, NRC Handelsblad and other publications. She is also a regular columnist for online platform Hard//hoofd. She studied German and history in Amsterdam and Berlin. Her poetry debut De grom uit de hond halen was published in September 2019 by Querido. 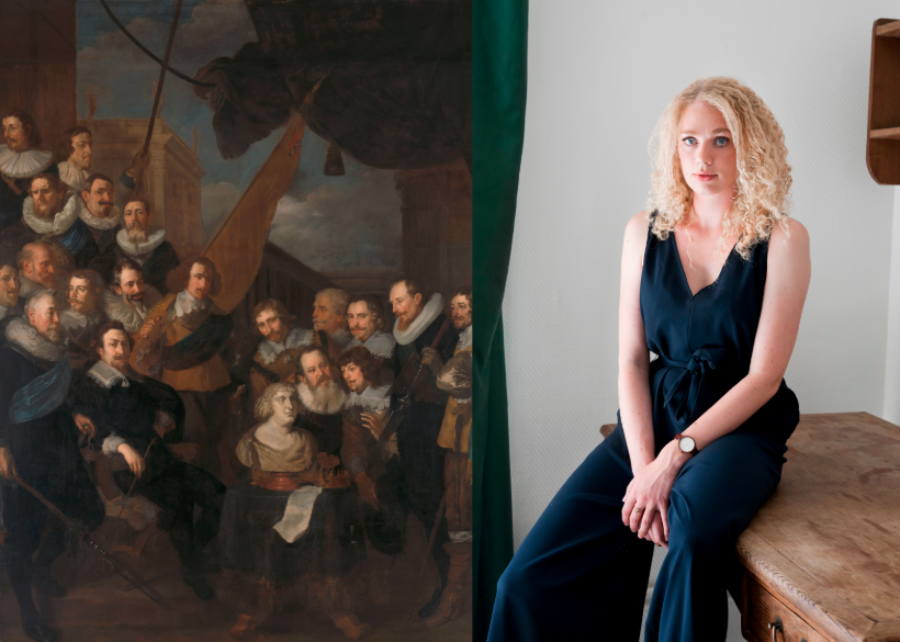 I saw them: sweeping the streets with their taches
and taking munitions from the cutlery tray. A limp lot
of flags, hoisted for French show, see them all standing
there, pale with joy

they’re for me, the overdressed chests and snappy collars
nooses that know how to say the words their lord
wants to hear, how happy they are to pay
for their own risk of suffocation

and what’s the queen-regent doing behind
the scene? Is she drawing a knife, a skewer for
the softer cases, is she looking for the son who wiped
her plate and said: gorge on your own
affairs and call me if you need me?

I’ll be met with a casserole of velvet. Dear
boys, what’s more hollow than an empty belly, a cancelled
show? The steps we climbed have been kicked away
and buried, starting to rot

and I am the folding card on the table. The music has stopped,
the micro-battery died a tightly pasted death,
the yawning salutations still marching through my jaws
as do the words city marketing, richly lined sloop
and the line

the queen bore a cuddly banner but during
the buffet she broke her tooth and we had to wallop.
Nobody saw it coming: the guard of honour turned funeral cortege
the celebratory muskets blobs of muck, the eulogy’s only
words now verarmt und vereinsamt before it falls silent
in shame.