Berndnaut Smilde is known for his inverted rainbows and sculptures that spread an antiseptic scent throughout several rooms. However, the Dutch artist became world-famous in 2012 when he created a series of clouds, of which Nimbus 2 was included in the London Saatchi Gallery and its photographs went viral. Art critic and curator Rosanna van Mierlo investigates how Smilde’s Nimbus series can be read as a dreamed-up mirage for digital citizens looking for a “real" experience.

It is hardly surprising that a Dutch artist should still be invested in the Dutch skies. Many have speculated about how the Netherland’s atmospheric particularity has played a part on constructing an aesthetic national identity. The documentary “Dutch Light” is but one example of how the particular make-up of a local atmosphere can become permeated with national identity politics: the desire for Dutch light to be different, and therefore significant in some way. In the history of Dutch visual culture the light — and more particularly the skies — of the Netherlands have gained almost mythical proportions as emblems Golden Age art and culture.

When visual artist Berndnaut Smilde (b. 1978, Groningen) produced his elusive Nimbus 2 in 2012 he seemed to effortlessly merge that same mythical grandeur of times past with the contemporary era of controlled technologies. Nimbus 2 has been lauded as a contemporary return to the romanticism of the pre-digital era, yet its effective immediacy is, arguably, based in a more critical attitude to the contemporary moment, created through similarities between Smilde’s man-made cloud and the man-made Internet. This essay will investigate how Smilde’s Nimbus series can be read as a complex, highly crafted response to a society steeped in alienating data-systems, a dreamed-up mirage for digital citizens looking for a “real" experience.

Nimbus 2 is challenging to describe as more than form because it is so beautiful. It is a hyper-realistic, miniature cloud made up of water vapour, mist and light, caught in a photographic flash. It lasts only a few seconds, but can, theoretically at least, be called forth in any place at any time. Since their first online conception Smilde's clouds have appeared anywhere from abandoned buildings and open fields to advertising campaigns, dreamily floating behind fashion-king Karl Lagerfeld and Donatella Versace. What ties these appearances together seems to be, first and foremost, an aesthetic concern with the natural world and art history. 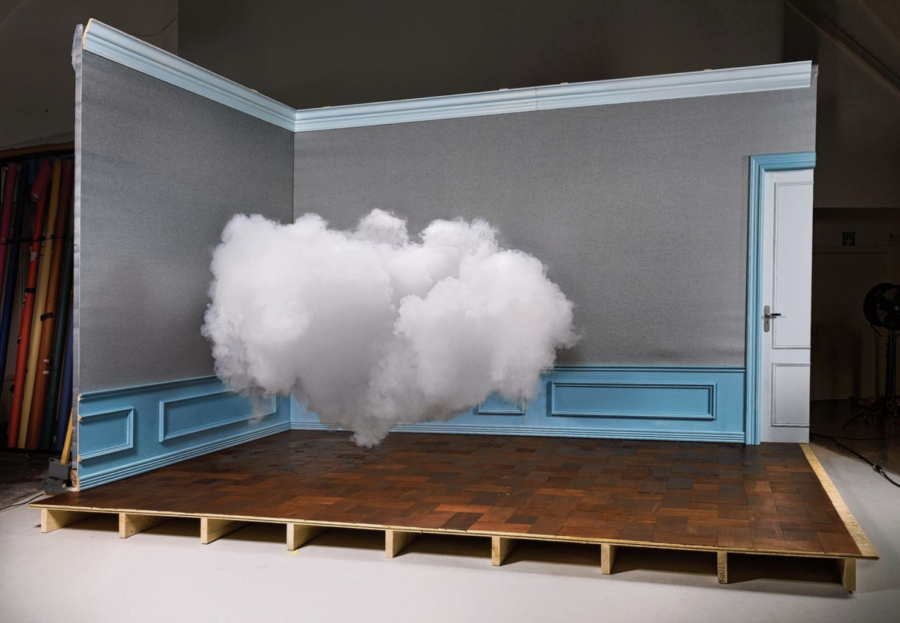 Yet there is something about the cloud as a ghostly body hovering in close proximity to human bodies that makes for an odd display, which leads to my second consideration: At its most intricate, conceptual level, Nimbus 2 is not about form but about relation. In manipulating the existing environment, Smilde forces links between molecules through heat and moisture. Using nothing but a spray bottle of water and a smoke machine, Smilde enables a clash between natural worlds (the environment), man-made technology (the smoke machine), and human action (Smilde’s own body and movements). The result gestures towards complex relations between technology, ecology and the possibilities (and limits) of human power. 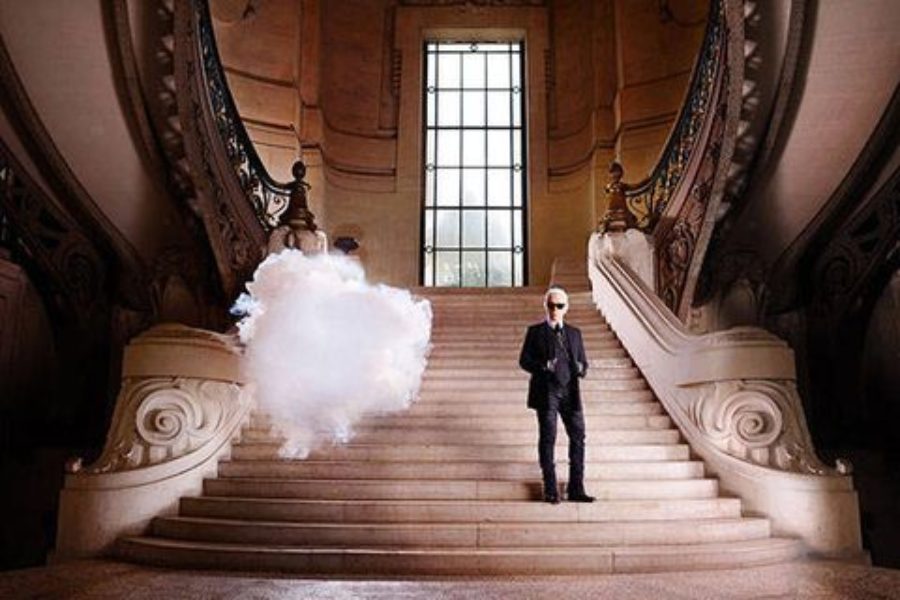 Karl Lagerfeld in the Grand Palais in Paris © Berndnaut Smilde

As Paula van den Bosch, the Bonnefanten museum’s curator, mentions in her article “Nature's Trespassing”, the first “Nimbus" was conceived digitally as a spectral, photographic rendition of a real-life cloud. “[Smilde’s] clouds are meant for, tailored to and even originate from the virtual space of internet. His very first Nimbus was a photographic registration of a tiny cloud, evoked in a scale model of a classical museum space […] and featured in an off-space internet gallery.” Although van den Bosch briefly touches upon the work "providing a perfect vehicle for a suggestive agglomerate of present-day topics” she elaborates no further on the significance of these suggestions, their meaning and their critical context. She instead focuses on the technical process and aforementioned link to the 17th century masters, alluding only briefly to the work’s significance as a “trespassing” figure. Yet this virtual birth-place is important in order to understand the work’s acute meaning fully.

Since the internet became accessible to everyone in the early 2000’s, anything and everything in this world has become, however partially and relative, just a mouse-click away. Somewhere along the way this virtual world was given the symbol of a tiny cloud. This figure was chosen for a reason. 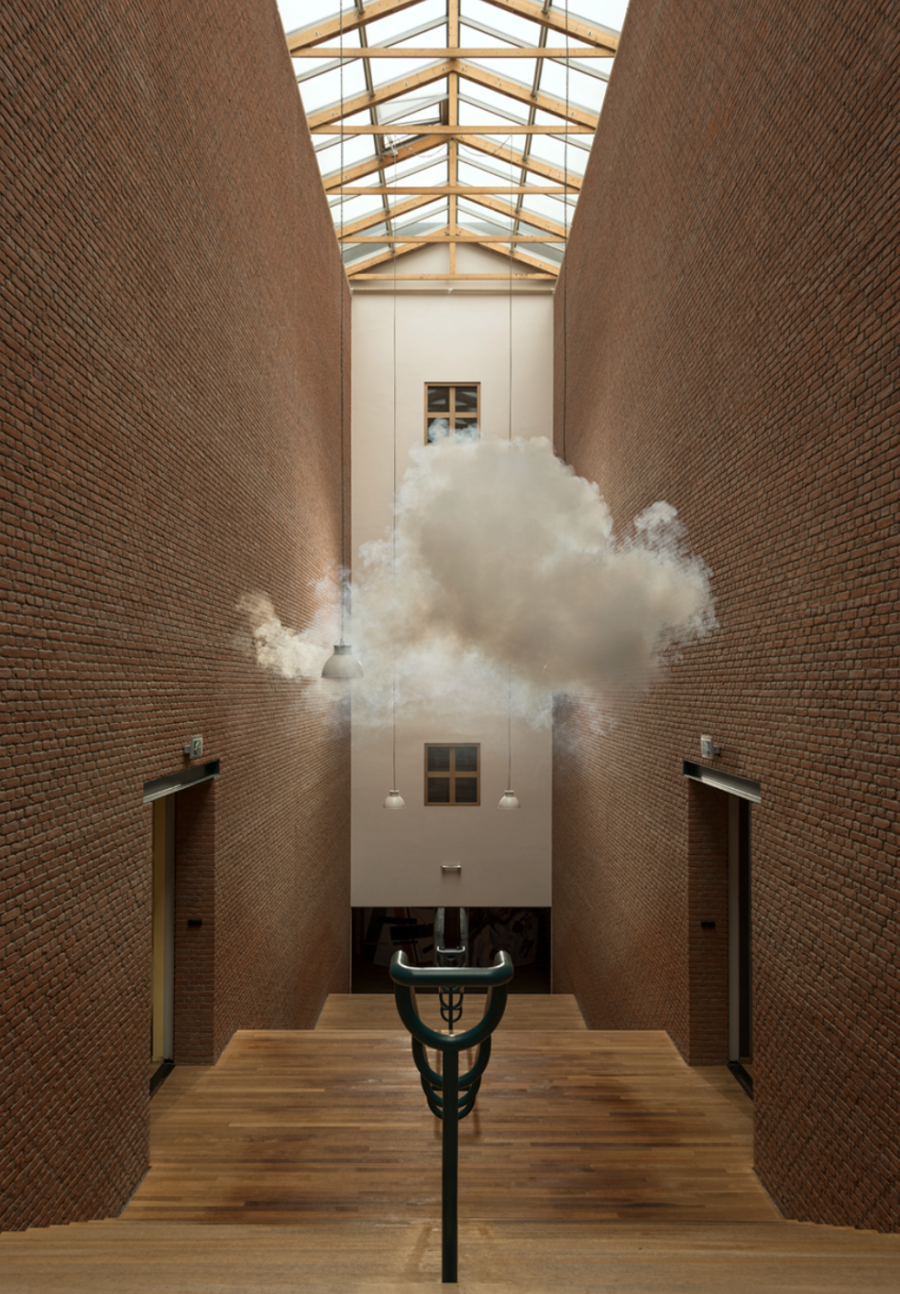 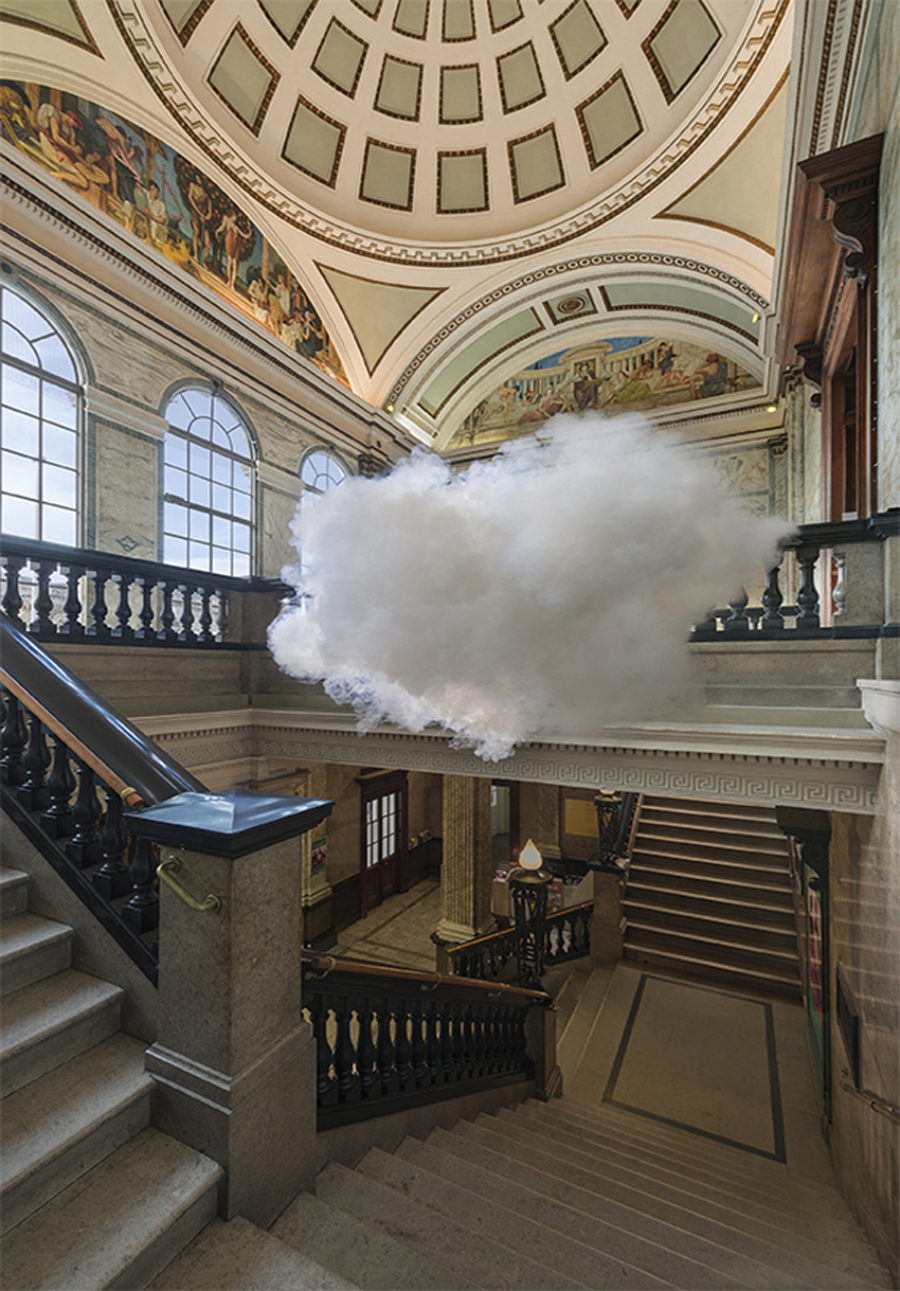 In A Prehistory of the Cloud, Tung-Hui Hu draws attention to the relationship between symbolism, power and data-systems that are the driving force behind the visualisation and organisational structures of the internet-Cloud, arguably as omnipresent a feature of everyday life these days as clouds in the sky. Clouds, when broken down into systems of meaning, are “both defined by proximity and distance.” In other words, they are a commonplace feature of the everyday but they are also continually beyond out grasp. 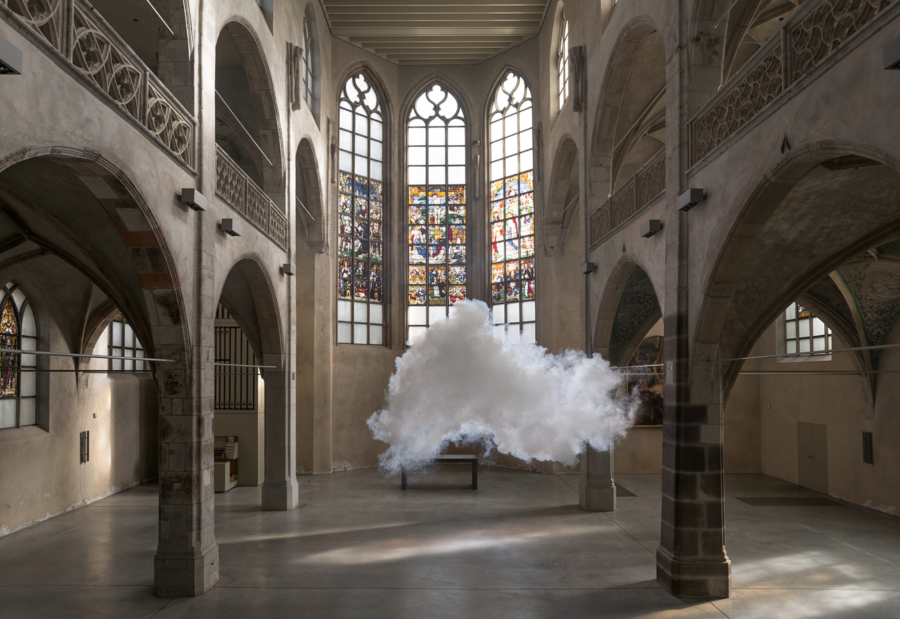 Symbolically, the internet works in similar ways: we are comfortable in knowing it is always there, yet we cannot pinpoint its existence to any real place or form. Hu argues that the amorphous nimbus cloud’s elusive yet omnipresent symbolism was the perfect vehicle to ‘give a shape’ to contemporary digital presences that are “unspecifiable or unpredictable, such as traffic control, social media and digital messaging.”

It is this unpredictability that motivates the tension evident in a word like ‘trespassing.’ It begs the question: what is trespassing where, and when? Like its internet-based brother, the physical Nimbus 2 is defined by a merging of closeness and distance. Yet the “sculpture" offers only a partial feeling of satisfaction by simulating this intimate remoteness. The power of this trespass, of this ‘existing in-between’ lies in how Nimbus was conceived for the virtual world and then ‘got out’ into the real world. In doing so, Smilde moves one step beyond merely interacting with the “sovereign power” that we have ascribed to data-systems in order to relieve ourselves from responsibility. He made this system tangible. 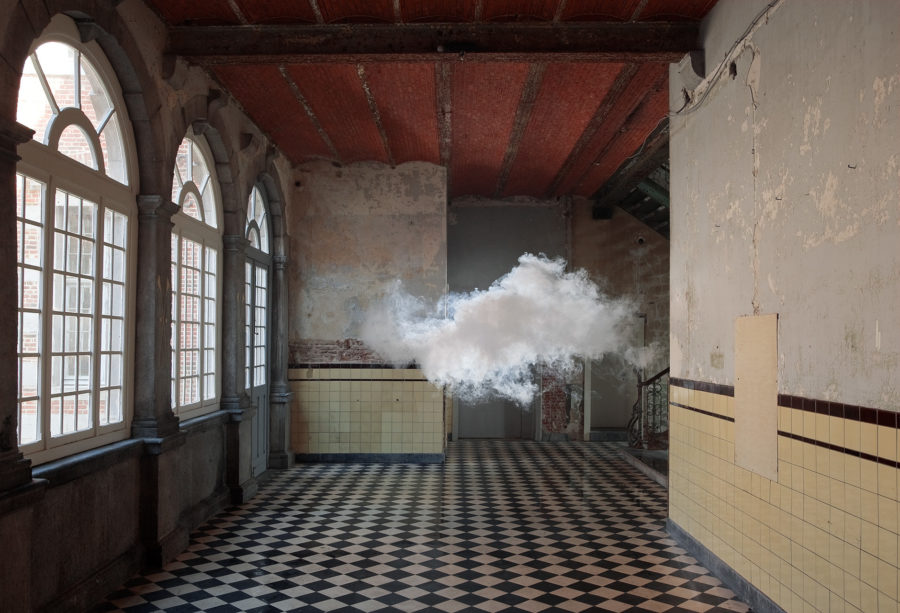 Through seeing Nimbus 2 at work, we become aware of our conflicting place as (in)dependent subjects. It is no coincidence that, aesthetically, Nimbus reminds us of religious scenes, of the holy realms of a regal God. Yet the trespass is not one of the holy into the personal, or of the natural into the domesticated world. It is one of the virtual becoming physical and the sovereign becoming public. The effect is that of nostalgia for something that isn’t actually there; a natural phenomenon, or a different, romanticised world, the imagined ‘simpler’ life of the personal and global past. By conjuring up clouds within a tightly controlled locale, i.e. museums, abandoned buildings, or urban areas, these ‘sculptures’ become figures of both common life and futuristic artificiality. 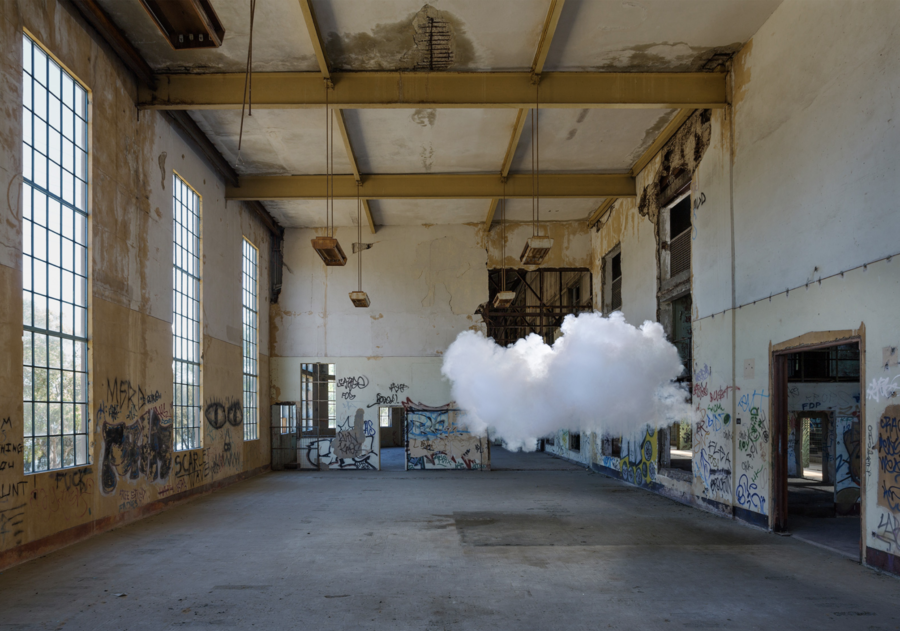 In conclusion, the return to the baroque aesthetic of the Dutch cloud can be interpreted not just as a nostalgic gesture, but exposes the complexity and anxiety of our lives as digital citizens. Nimbus’ 2 is an amorphous mass that can be experienced, but only from afar. We are both a part of it and separate from it; enveloped by the atmosphere the cloud is made of, yet unable to become active participants. Symbolically, the cloud is a perfect carrier for “something that constantly fluctuates and is impossible to know”: the shapeless unknown that can be felt, but not touched, explained or contained. Through Nimbus 2, we stare if the face of our own “cultural fantasies about security and participation,” or in other words: about technological control and personal involvement. Rather than romanticising the natural world, Smilde exposes the invisible motivations and anxieties that underwrite the anxious experience of being a digital citizen: being both there and not there, in and out of control, subject and sovereign.