At the request of the Flemish-Dutch House deBuren eighteen young Flemish and Dutch authors each brought a painting from the Rijksmuseum back to life. They wrote a new text about an old work from the Gallery of Honour, based on one key question: what do you see when you look at these paintings through gender glasses? Malika Soudani gives a voice to Portrait of a woman by Frans Hals. ‘I wonder if they called it that because it’s a good title or because they’ve forgotten my name.’

Malika Soudani (b. 1997) frequently works her love of cooking into her texts. Her experiments in the kitchen are more than matched by her inquisitiveness as a creator. As well as a poetry collection, she hopes to one day publish a (literary) cookbook. She has been an intern at production company SLAA, worked as a PR assistant for Read My World and has been studying Creative Writing at ArtEZ University of the Arts since 2017. 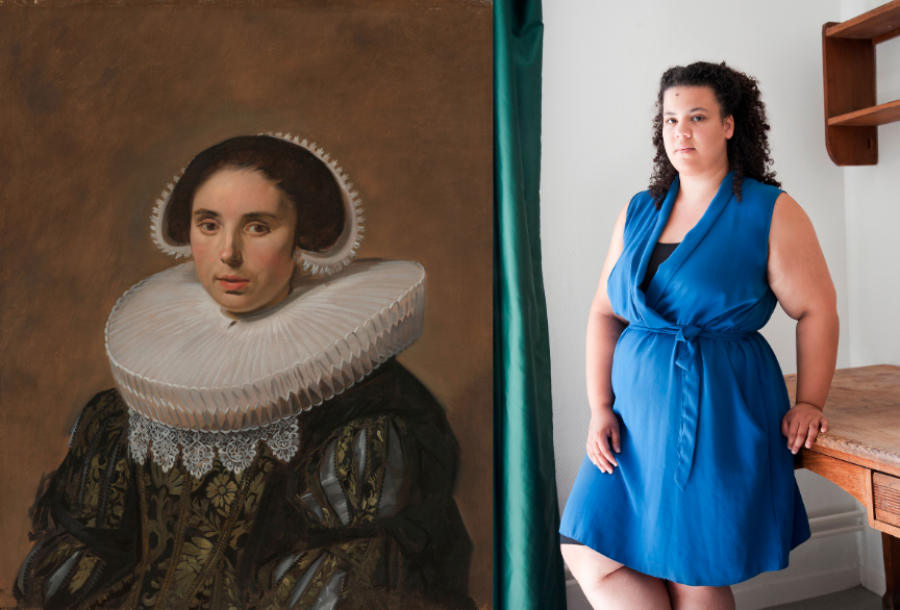 I’ve had my portrait painted and the canvas is called ‘Portrait of a woman’. I wonder if they called it that because it’s a good title or because they’ve forgotten my name, or because they’re confused about which name is mine. I am a woman. A face in thin paint.

[Draw a realistic peach and rub it until faded. Soft female skin. Sketch two almond-shaped eyes, a narrow, straight nose and a pair of lips. Full lips, but not too full. Lips just a touch rosier than the healthy glow on her cheeks. Leave them slightly parted - it looks comfortable. Keep the head small, pay enough attention to the details, avoid hard lines. We’re dealing with a delicate face here.]

My head is too small for the dress I’m wearing and shiny. I can’t help but think of a doorknob or the cup on a saucer. Both serve the hands that touch them, it’s that touch that gives them meaning. While the duke’s porcelain may be the same as mine, it’s worth more.

[Place the hands in her lap and draw the shoulders not quite straight. This is a good pose, perfectly poised between formal and informal. Call it: mysterious approachability. Let her look at the viewer. Vulnerably, not fearfully. Let the eyes speak for her.]

‘Oh, look at this piece. What a beautiful woman. And those clothes. She must be married to a rich man, judging by that collar. I doubt it feels good, but she looks all the better for it. See that embroidery on her dress? You’d almost think it was silk. It must be the shadow. It really brings out her face too. Such a gorgeous woman.’

I have six birthmarks on my right thigh and three on my back. One of my knees bears a scar. I’d have to lift up my dress to tell you which of the two. When I smile I try not to show too many teeth. I’m missing almost all of my molars. I learned to read and write before I became a mother. I love to write about the rain. About it washing the cobblestones, overpowering the stench of rotting food and making me forget the sweat that slides between my breasts. I dance before going to bed, preferably without any clothes on. I bite my cheeks and spit the bits of skin out of the window next to my bed. I always look people straight in the eye. Proud and self-assured. In my mind I wonder where I might find their biggest birthmark.

[Take a step back from the work and ask yourself this question: what else does she need? Is she sufficiently separated from the background? Does she need more accessories? Is her body properly displayed? Make sure she neither disappears nor stands out too much among other portraits. Give her a little more, a little less colour, a bigger, smaller collar, a smile if necessary. Give, take something from her so people know: this is a portrait of a woman.]