Flemish Flowers for New York and Street Lamps for Amsterdam

Clara Peeters still-life acquired by the Metropolitan Museum of Art

The Metropolitan Museum of Art in New York acquired A Bouquet of Flowers by the Flemish painter Clara Peeters, who was a founding figure in the history of European still life. According to a news item on The Art Newspaper, the female artist was on the top of the Met’s wish list and helps fill a large gender gap in the collection. 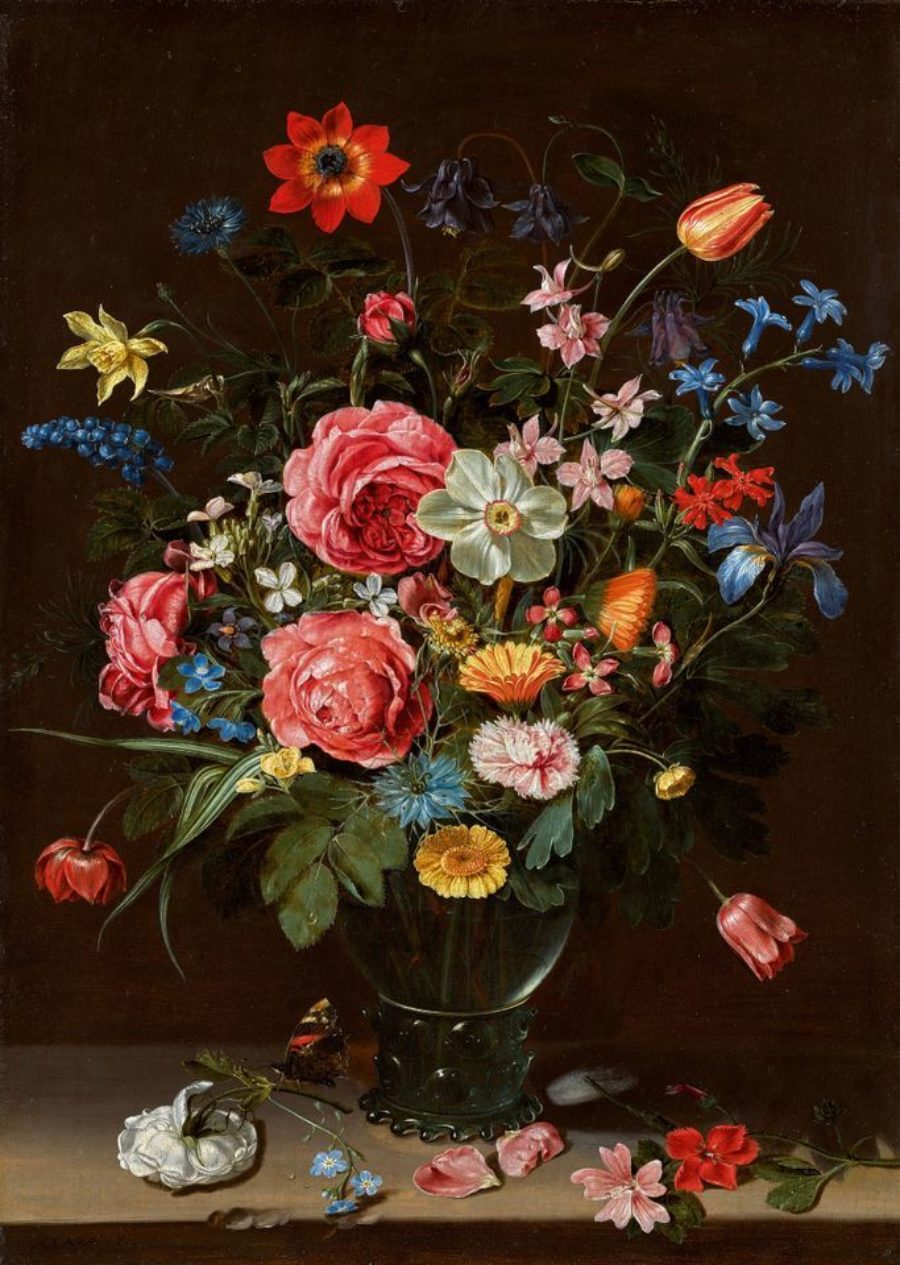 Painted around 1612, Peeters’ still-life depicts an opulent bouquet of flowers in a roemer glass, placed on a low stone shelf. The late spring and early summer blooms range from roses to tulips, narcissi, carnations, and irises. Fallen blossoms rest on the pitted ledge, including a sprig of forget-me-nots near the artist’s signature, a typically playful self-referential device.

See the entry in the Met’s online catalogue for further information about the new acquisition.

Maryan Ainsworth, curator of Northern Renaissance paintings at The Metropolitan Museum of Art in New York, has handed her research using infrared reflectography (IRR) to the RKD – Netherlands Institute for Art History in The Hague. The archive was transported from New York to The Hague in February.

Dr. Maryan W. Ainsworth took her doctorate at Yale University on Bernard van Orley, after which she started a career at the Metropolitan Museum of Art. She is currently responsible for Early Netherlandish, French and German painting. Ainsworth developed a specialty in technical research; curatorial projects led to her conducting research using scientific equipment into the underdrawings of many paintings in the United States and elsewhere. 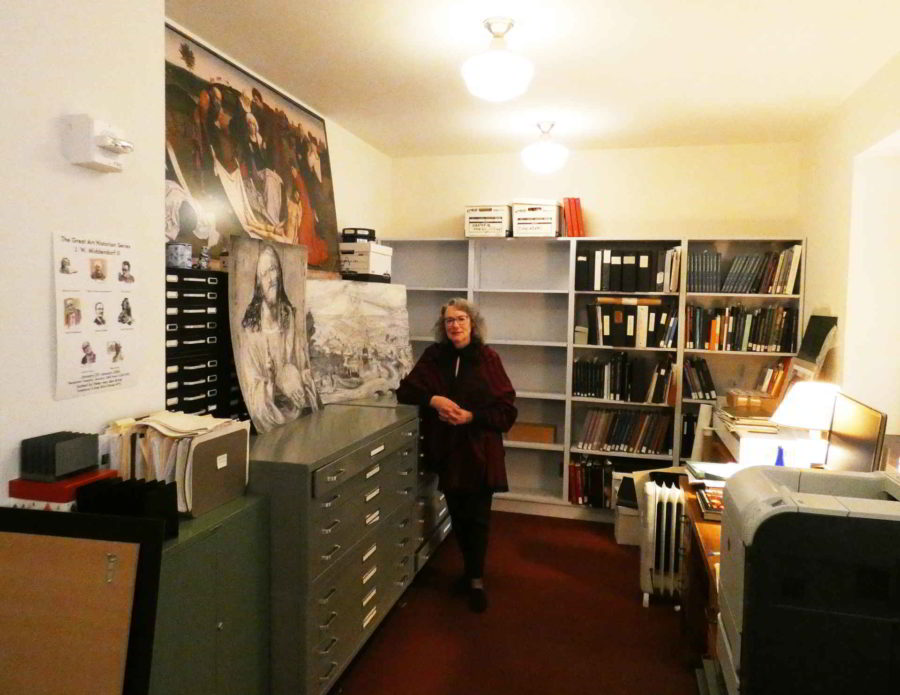 Maryan Ainsworth and her archive at The Metropolitan Museum of Art

Ainsworth’s archive comprises the results of forty years of technical art historical research into hundreds of paintings from the fifteenth and sixteenth centuries. It contains a particularly rich collection of IRR information (analogue and digital), files of transparencies, photographs and other research data. The archive took up a whole office in the Metropolitan Museum of Art. Because of her leading role as technical art historian, Ainsworth’s research data is well known, and it is of tremendous value for researchers.

The RKD is the only place in the world that holds a comparable and important collection of IRR information. The RKD plans to make the information available (online) as quickly as possible, providing researchers with a unique and precious collection.

Centraal Museum Utrecht was able to purchase a masterpiece by the Utrecht painter Dirck van Baburen at a New York auction. Following its purchase in 2019 of Joachim Wtewael’s Banquet of the Gods, this is the second major art work that the museum has managed to acquire within twelve months for its collection of old art.

Baburen’s painting fits the collection beautifully, on account of both the maker and the subject. The painting shows the Utrecht nobleman Pieter van Hardenbroeck (1593-1658), who was in love with the nun Agnes van Hanxelaer. She left the convent in 1623 to be with him. Pieter commissioned this painting in the same year to celebrate their relationship: it is a ‘portrait historié’, depicting the couple as the Persian princess Granida and Daifilo, a simple shepherd. 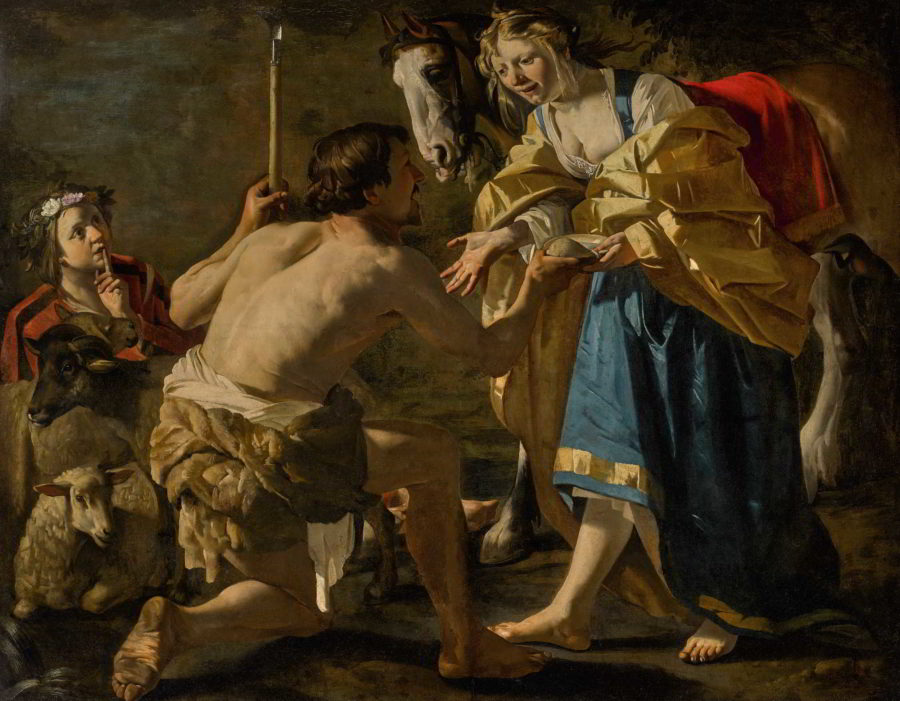 The subject derives from the theatre piece Granida by the famous Dutch poet and playwright P.C. Hooft (1615). With this wonderful piece, Dirck van Baburen (one of the Caravaggisti painters and founder of the pastoral painting genre, and whose idea it was to depict them as such) created the first rendering of an immediately popular theme.

Gerard van Honthorst painted his beautiful Granida and Daifilo in 1625, which is also part of Centraal Museum’s collection. Pieter and Agnes married in 1628. Van Hardenbroeck’s testament shows that he kept the painting until his death in 1658.

The Amsterdam City Archives announced that a large collection of drawings, manuscripts, printed publications and objects preserved for centuries by descendants of Jan van der Heyden (1637-1712) has been acquired by the city of Amsterdam.

Contributions from both public and private funders have ensured that this unique collection will be kept in the Netherlands and made accessible to the public at large. The Amsterdam Museum will house the three-dimensional objects and the Amsterdam City Archives will acquire and conserve the works on paper. 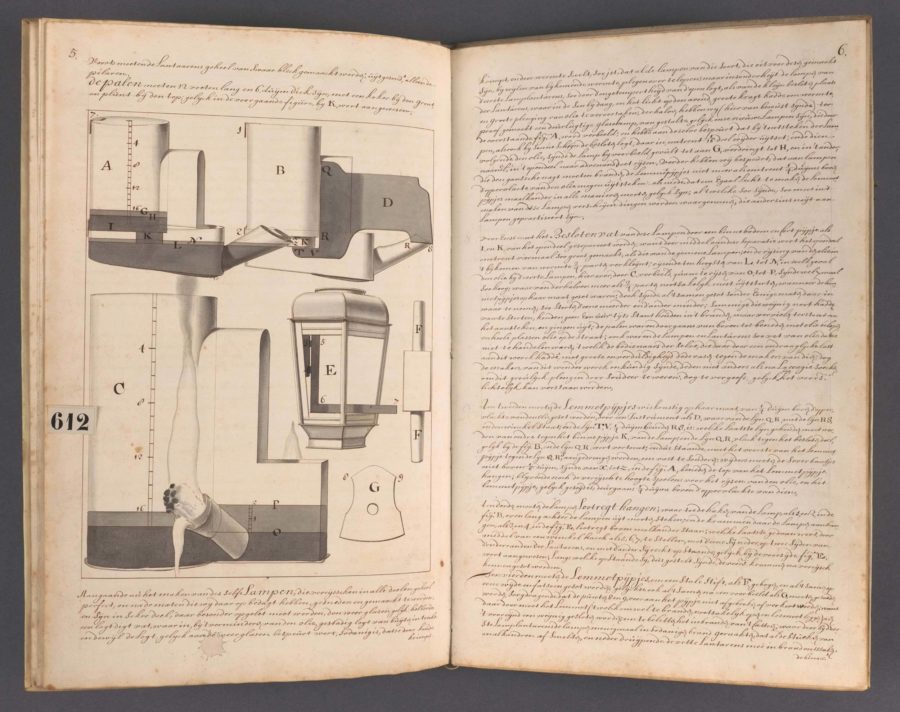 On 3 July 1669, Amsterdam’s city councillors agreed to a proposal made by Jan van der Heyden to install 2,556 street lamps in the city. Thanks to improvements in street lighting, Amsterdam became Europe’s city of light in the late seventeenth century. Inventor, artist and entrepreneur Jan van der Heyden (1637-1712) was the spiritual father of this street lighting and of a revolutionary new fire hose.

The contributions Jan van der Heyden and his family members made to many seventeenth-century inventions came about in close collaboration with Amsterdam city council.

A few years after the streetlamps were installed, Van der Heyden developed a revolutionary new fire hose and improved the organisation of the fire brigade. This meant that fires were under control more quickly, which prevented fires from spreading.

Thus, it is quite possible that we owe the survival of large portions of the Amsterdam’s historic center to Van der Heyden. Moreover, Van der Heyden was an outstanding painter and entrepreneur who issued his drawings and prints to publicize his inventions to a wider public. 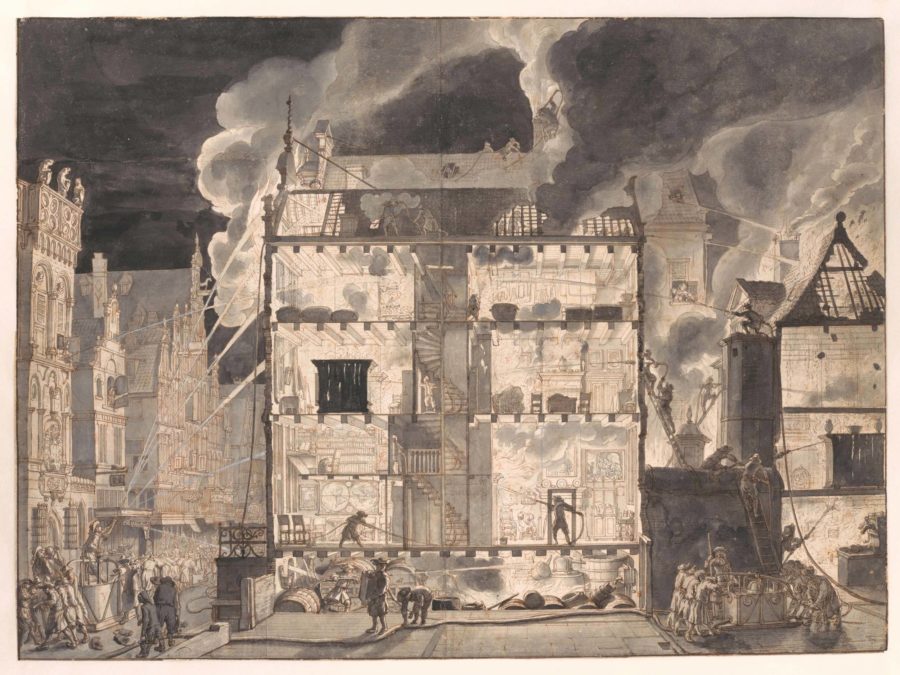 Bert de Vries, Director of the Amsterdam City Archives: “The importance of this collection cannot be overestimated. The inventions of Jan van der Heyden, the ‘Da Vinci of the Low Countries’, were imitated all over the world, and his artworks still enjoy the full interest of the international community. We are enormously proud that this collection has been entrusted to us for conservation and presentation”. 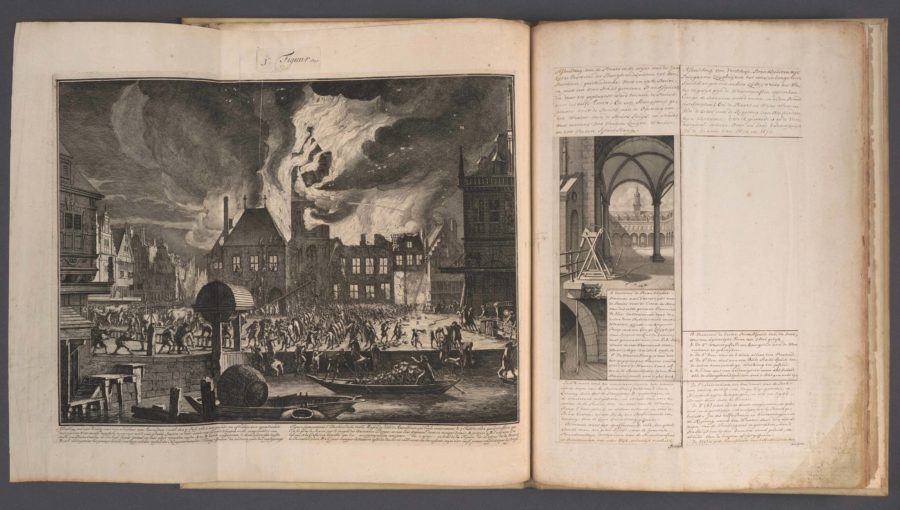 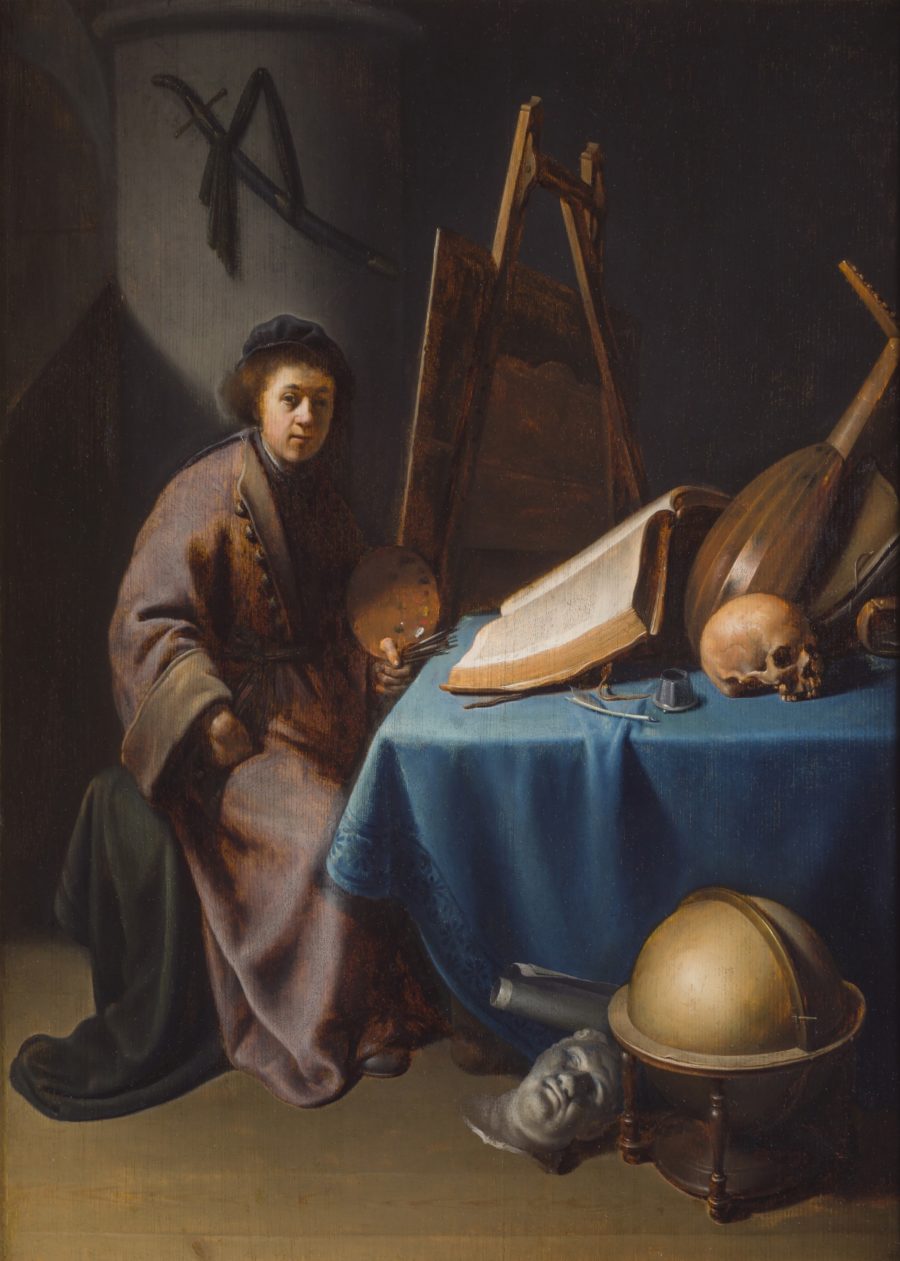 Museum De Lakenhal in Leiden announced the acquisition of Gerrit Dou’s Artist in His Studio from a British private collection. Painted in ca. 1632, this early work of Rembrandt’s first pupil shows the influence Rembrandt had on Dou as well as Dou’s own quickly developing talent.

The painting might be the first work that Dou created as an independent artist. The subject was taken after Rembrandt’s Artist in His Studio, now in the Museum of Fine Arts, Boston.

The acquisition of The Artist in His Studio was made possible entirely through private gifts. The painting will enter the permanent exhibit on Rembrandt and the Leiden fijnschilders in Museum De Lakenhal.