At the request of the Flemish-Dutch House deBuren eighteen young Flemish and Dutch authors each brought a painting from the Rijksmuseum back to life. They wrote a new text about an old work from the Gallery of Honour, based on one key question: what do you see when you look at these paintings through gender glasses? Obe Alkema gives the floor to a festoon of fruits and flowers: ‘We’re fruit, flora, authentic. We want to be seen the way Yotam Ottolenghi sees us.’

Obe Alkema (b. 1993) has published extensively in various magazines and on online platforms in recent years and in November 2018 he made his debut with poetry glossy Obelisque, which was nominated for the 2019 C. Buddingh’ Prize. 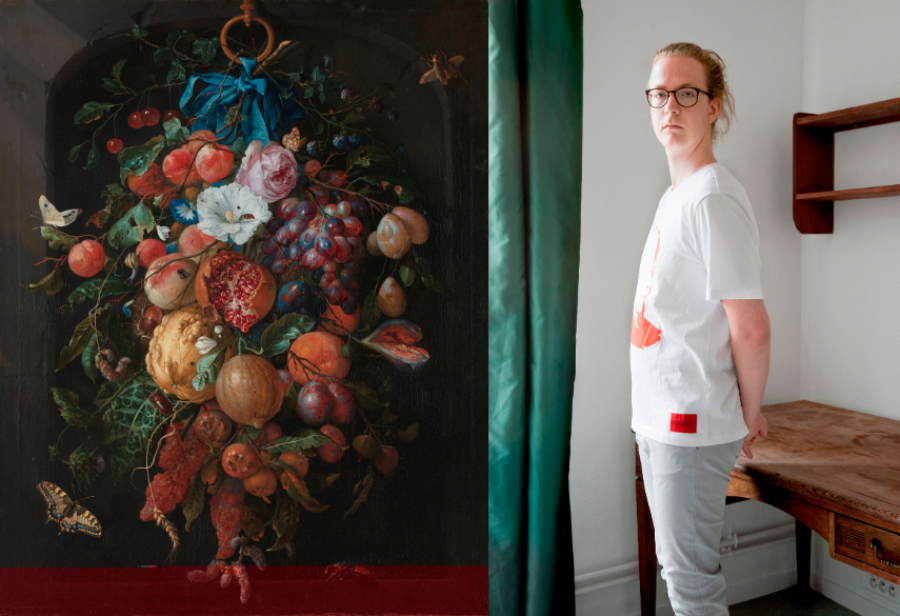 Festoon of Fruits and Flowers

Fruits and flowers dangling from the famed Marian blue ribbon. That’s us, a festoon of fruits and flowers, hanging in front of an alcove, meant to be purely ornamental. That’s why we’re hanging here. This is how a baroque concept becomes commonplace. Asked about his associations with a bunch of grapes, Joost replies: wine, seas of it, to be precise. We’re on display. We speak as a collective, and there’s a reason for that. We’re indivisible. We see you looking at us. It’s no fun, to be honest. You stare and point at us, absolutely mesmerised. What’s going on? It’s itchy. You, murderer or ally, appropriate us. Do we provoke this? What’s the meaning of the peach? Our kin. The visitor thinks: Momotarō. He, born from a giant peach that floated on the stream, told the woman who took the peach and her husband that he had been sent by the gods to be their son. Mind you, that was a different peach. Forget the peach emoji, forget the peach that Elio screwed. Like all of us, this peach just wants to be itself. This peach isn’t the light of the world. Timeless symbols, not our thing. It’s as simple as that: a decision, no more and no less. Joost again: on the other hand, I can imagine that flowers and fruits love to be celebrated, otherwise they wouldn’t smell so nice. Do we have anything to say on the matter? Yes, we’re colonised by various gluttonous insects. And the rot crawling all over our surface. We’re fruit, flora, authentic. We want to be seen the way Yotam Ottolenghi sees us. In search of forgotten common ground, we’d like nothing better than to become one with ourselves. We want to be ourselves. The same way Marlon Brando just wants to be Marlon Brando. More varnish! Seriously, let that rose blush, let that grape shine. It wasn’t long before Jesus, like the sun in ancient Egypt, was depicted as a new-born child in the arms of his mother, the Virgin Mary. What am I doing here, the fruit wonders. Let us be perfectly clear: we exist by the grace of ourselves. We don’t depend on you, prima donna, visitor. We’re not Adam’s plaything. We depend on no-one, except on the gluttonous insects that, by the same token, depend on us. We welcome them every free hour we have. A relief. Isn’t that enough? We’re happy to be on display for their sake. Not for the religious message, the sectarian reflex. The little nun retouching the rot. We’re supposed to remind people to avoid gluttony and excess. And gluttonous symbolism itself? Heretics. Why do they hate us? We’re not allowed to be anything else, to be fruit. Fuck, we’re slowly sinking into oblivion here. Weird, isn’t it? But it feels fine, actually. We remain the pomegranate pips in the mouth of the abducted Persephone. Now it’s us yanking away the fig leaf. Sweetheart, that headwind is good for you.