For four years, a multidisciplinary team from the Royal Institute for Cultural Heritage (KIK-IRPA, Brussels) worked on the research and conservation-restoration of the exterior of the Ghent Altarpiece by the Van Eyck brothers (1432). In the book The Ghent Altarpiece. Research and Conservation of the Exterior, the restoration team presents its recent work, while bundling the broad findings of their research. Richly illustrated, it includes a unique selection of photos, scientific imaging and explanatory diagrams.

As the most striking realization, the course of the treatment of the paintings themselves is explained in detail; from varnish removal, over removal of retouches and overpaint, to consolidating the paint layer, filling in gaps and re-varnishing. Based on archival research and material-technical study, the book also reveals when, how and why this masterpiece was so broadly overpainted in the past. These additions were analyzed using the latest techniques by the laboratories of the KIK-IRPA and the universities of Antwerp and Ghent. 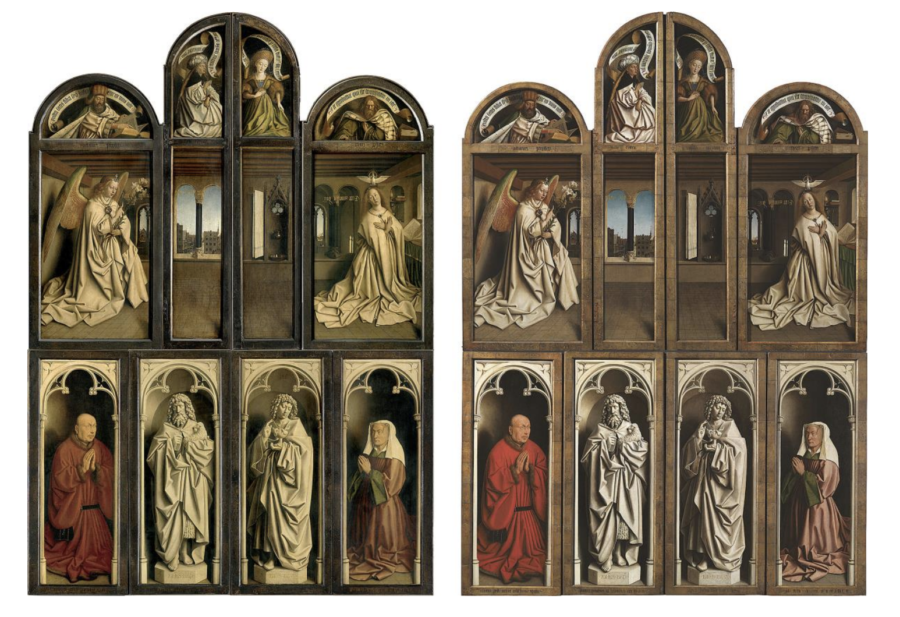 Phase 1 of the restoration took place from October 2012 until October 2016. © Lukasweb.be-Art in Flanders vzw, foto KIK-IRPA

The authenticity of the famous quatrain and other inscriptions on the frames could also be confirmed by meticulous examination of the letters and their pictorial structure. This text is the most important source of information about the creation of the Ghent Altarpiece: started by Hubert, completed by Jan, commissioned by Joos Vijd and installed on 6 May 1432. And now that the original painting is visible and has been studied from the underdrawing to the final touch of paint, the question of the identification of the hands is raised again. What is the share of Hubert, Jan and their assistants in the execution? The conservator-restorers conclude that the underdrawings and paintings of the exterior of the wing panels were carried out by a single artist: Jan Van Eyck. Now we are looking forward to the findings on the inside of the altarpiece, the last treatment phase of which will start in 2021. 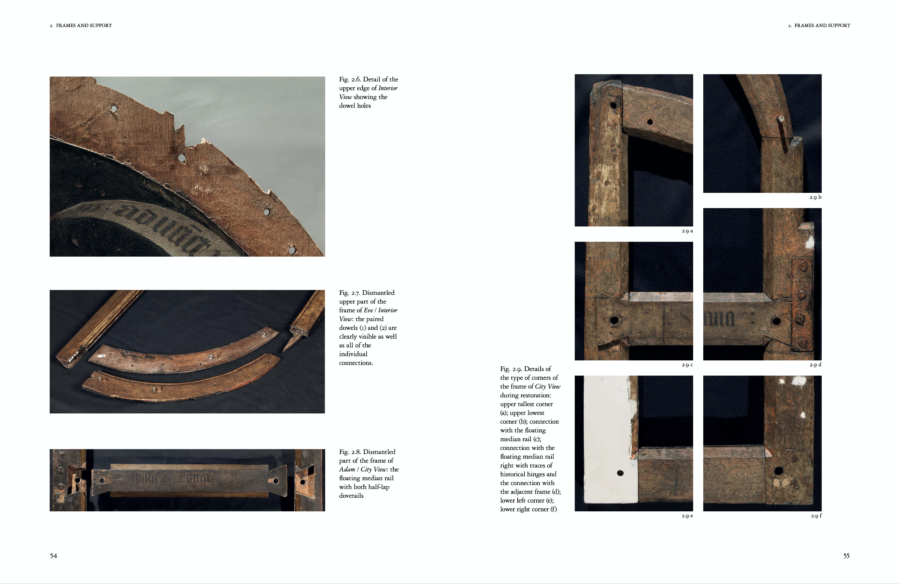 The conservation of the oak support and of the frames is often overlooked. The treatment of the wooden panels, which mainly focused on the durability of the polyptych, also provided an opportunity to thoroughly map its structure. The uncovering of the original polychromy on the frames was as startling as that of the paintings themselves and essential to the rediscovery of the original appearance of the Ghent Altarpiece. The refined stone imitation on the silver leaf with remarkable effects of light and shadow is also an extremely rare example of polychromed frames from that time. The technical study in The Ghent Altarpiece makes a crucial contribution to our knowledge of late medieval polychromy. 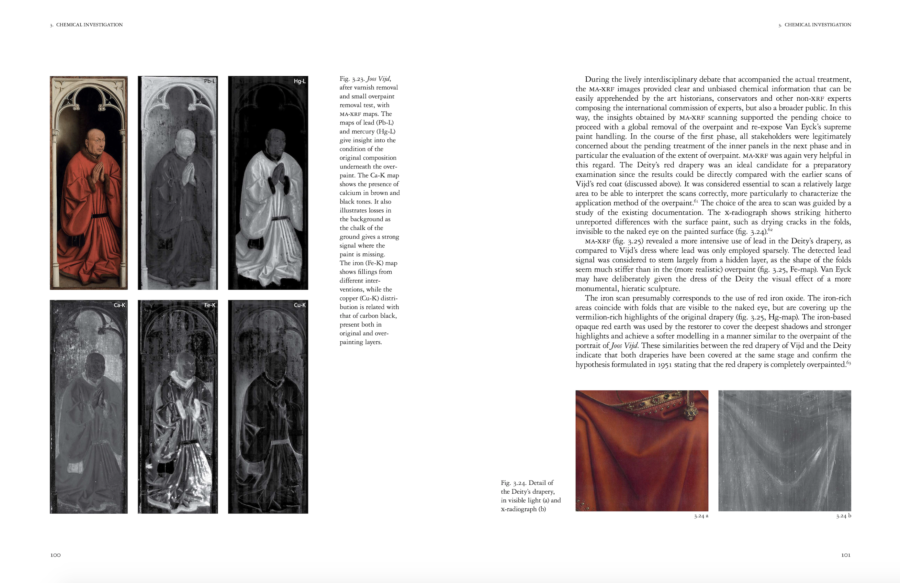 On the basis of the new research data, the original display of the altarpiece in the Vijd chapel was also examined. Now that the stone imitation on the frames has been uncovered, the issue of the hinges examined, and other comparative material scrutinized, it seems that the altarpiece was originally crowned by a wooden canopy. The upper and lower registers would have been adjoining, but the wing panels could be opened and closed separately. These findings are of practical importance for the display of the altarpiece in the new visitors’ centre in St Bavo's Cathedral at the end of 2020.

Detail of Isabella Borluut, before and after the restoration © KIK-IRPA, Brussels 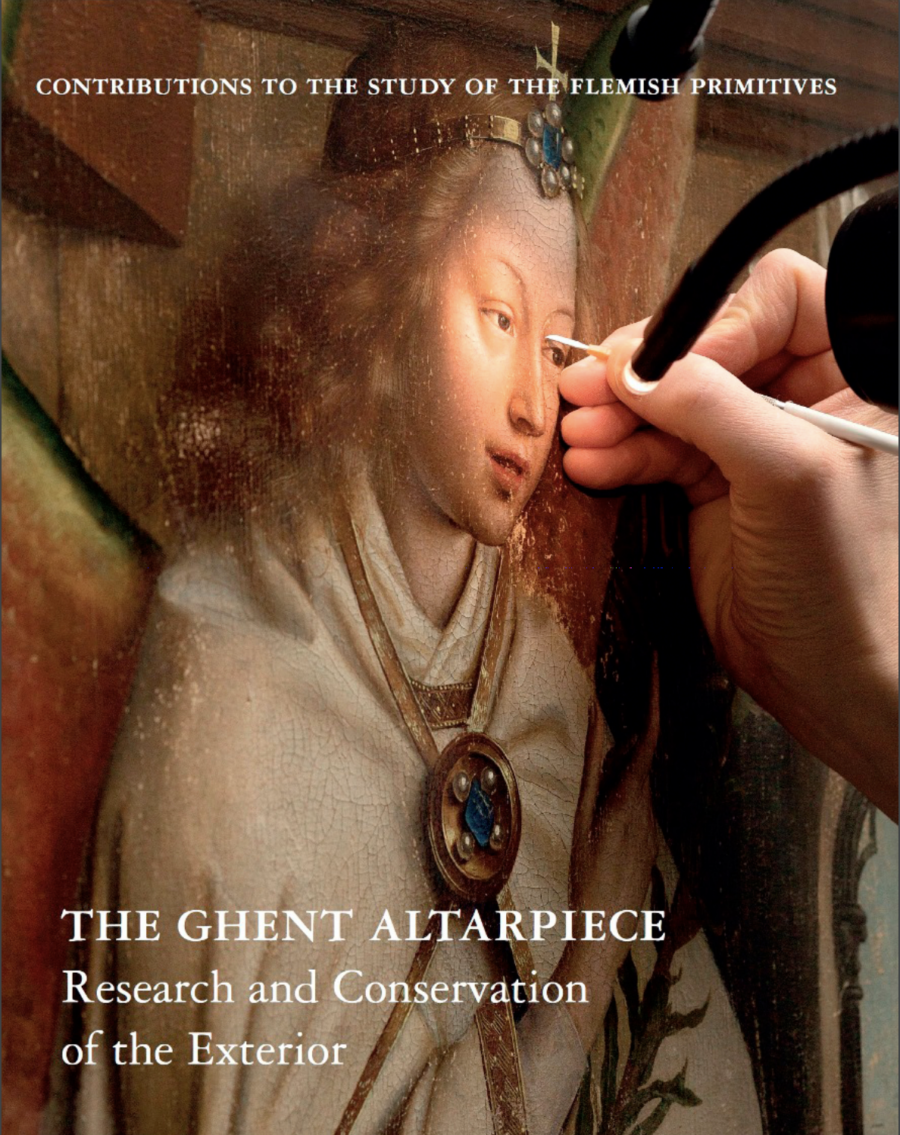 Together with this publication, the Centre for the Study of the Flemish Primitives of the KIK-IRPA offers online the complete and up-to-date bibliography of the Ghent Altarpiece: nearly a hundred pages cite all publications since Van Vaernewijck (1560) until the recent exhibition catalog of the Museum of Fine Arts, Ghent (2020). A tremendous task, since no other Flemish painting has caused so much ink to flow as the Ghent Altarpiece. Now available for free download!

The Ghent Altarpiece. Research and Conservation of the Exterior is published by Brepols.

Van Eyck Through the Canon’s Eyes

An Optical Revolution in the Middle Ages. The Hidden Talents of Jan van Eyck