Shelling Out: A Unique Belgian Phenomenon

Derek Blyth takes you on micro adventures to L-Spots, hidden and exciting places in the Low Countries. This week he points out a unique Belgian phenomenon: the trade in paper beach flowers.

No one seems to know how it started, but children have been selling paper flowers in the little resorts along the Flanders coast for at least one hundred years. The children start by digging a hole in the sand to create their make-believe flower shops, carefully carving out a counter and a bench. Then they assemble the flowers out of colourful crepe paper bought in local craft shops.

Maybe the children will add a little sign to indicate the shop is open. Sometimes parents or grandparents will be employed to lend a hand with the family business.

But the strange thing about the flower sellers is that they don’t trade flowers for money. They operate an informal beach economy based on the ancient currency of seashells. And the rules are strict. No mussel shells. No whelks. Only razor shells will do. 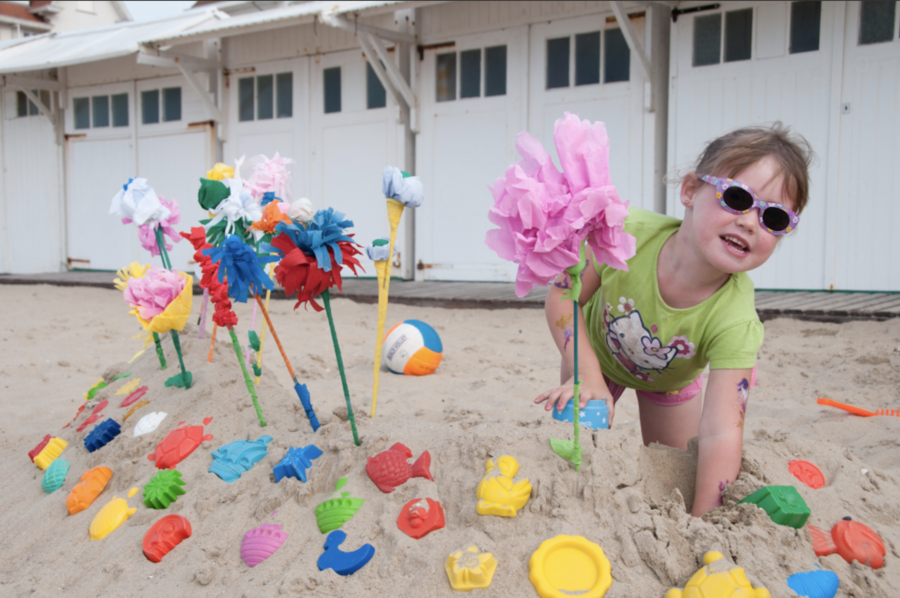 Say it with flowers

The Flemish artist Katrien Vermeire, who grew up in De Haan, filmed the beach flower sellers in her home town in the summers of 2011 and 2012. “When you look at the beach, you will often see a maze of a dozen or so shops,” she said in an interview. “The children often don’t understand each other’s language, so they try to communicate using flowers. And so children of different nationalities become friends.”

Vermeire discovered that the payment method varied from one resort to another, depending on how easy it is to find the right shells. On Knokke beach, the flower sellers ask for razor shells, whereas along the coast in De Haan the going rate is one or two handfuls of assorted shells.

“You don’t find it anywhere else in the world,” she said. “I came across two French sisters and a German family with three small boys who came to our coast just because of the beach flowers.”

Vermeire’s short film is titled Der Kreislauf (The Handful). Released in 2014, it has been screened at several international film festivals. It is a film about imagination and play, but also about how an economy works. And so it is not so surprising to discover that the film is now screened in the new museum of the National Bank of Belgium alongside its displays of coins and banknotes. “However young they are, the children are already applying all the rules of commercial trading,” the museum website notes dryly.

On the Road With DAF, a Quintessential Dutch Car

The Handelsbeurs in Antwerp, the World’s First Stock Exchange