Aelbert Cuyp (1620-1691) is one of the most famous artists that came out of Dordrecht. To celebrate his 400th year of birth, The Dordrechts Museum is organizing a special exhibition that focuses on his impact on English landscape painters. The expo was given the beautiful title In the Light of Cuyp because he is the unsurpassable master of sunlight paintings. The exhibition will be on show until March 6, 2022.

Cuyp’s life was like that of so many other Dutch painters. He lived his entire life in his birthplace of Dordrecht and mostly painted his own surroundings. If he made work on commission, it was for local dignitaries or authorities. Despite the success of his sunny landscapes with rivers and cattle, his fame when he was still alive remained limited to his own city.

He painted skaters on ice, ships on the Meuse River, an old duck and even Biblical scenes, but his specialty was landscapes with rivers, horsemen, and cows bathed in golden sunlight – often a sunset. One of the highlights of his oeuvre is River Landscape with Horseman and Peasants from The National Gallery in London; the painting is no less than two and a half meters wide. The work exudes abundant peace and quiet. Near a group of cows resting unhindered on the road, there is a shepherd boy talking to a rider on a horse. The only real action consists of a duck hunter with a gun who is hidden in the bushes on the far left. The monumental landscape, the lifelike animals and the subtle rendering of warm light: this work contains all the qualities for which Cuyp would become so famous.

Hazy light from a setting sun and a mountain landscape are typical elements of Italian painting. But unlike many of his contemporaries, Cuyp never visited Italy. He studied paintings by Dutch painters who had worked in Italy, which became a source of inspiration for the more stay-at-home painters.

Cuyp’s biggest role model was the Utrecht painter Jan Both (1610-1652). On the occasion of Cuyp’s four hundredth anniversary, The Dordrechts Museum has been given one of Both’s finest paintings, Italian Landscape with the Ponte Molle near Rome. It was until now part of a private English collection.

Jan Both, Italian Landscape with the Ponte Molle near Rome Ⓒ Dordrechts Museum

A Cuyp craze in England

Halfway through the eighteenth century Cuyp was discovered by English painters. The popularity of his work grew so rapidly over a short period of time that one can safely say it sparked a Cuyp craze. The English were particularly captivated by his landscapes with bright warm sunlight, serene river views, cityscapes and animal paintings. The aristocracy in particular was attracted to his work, not only by the glorification of outdoor life and hunting, but also by the unmistakable tranquility that Cuyp’s landscapes radiated. They were also familiar with the hazy golden morning light of the Dutch river country. But most impressive were Cuyp’s monumental, lifelike and well-fed cows – after all, the English collectors also run agricultural businesses on their estates.

English collectors and dealers bought up so many paintings originating from Holland, that by 1800, Cuyp’s paintings could hardly be found in the Netherlands. The River Landscape with Horseman and Peasants was already purchased before 1764 for the collection of John Stuart, 3rd Earl of Bute in Bedfordshire. Cuyp’s Cattle and Shepherds, a simple composition in a considerably large format, was exhibited with several other paintings by the master at the Dulwich Gallery in London, the first public museum in England, which opened in 1817.

By the end of the twentieth century, 125 of the 172 paintings by Cuyp were in English collections

It would become one of Cuyp’s most acclaimed works. From the eighteenth century onwards, his paintings were also reproduced by English engravers, which increased his fame considerably. His popularity in England was evident by the fact that by the end of the twentieth century at least 125 of the 172 paintings by Cuyp were in English collections.

English landscape painters were inspired by Cuyp’s work until late in the nineteenth century. He was not their only role model; painters such as Paulus Potter, Jacob van Ruisdael, Adriaen van de Velde and Nicolaes Berchem were also very popular. Thomas Gainsborough (1727-1788) was one of the first painters to study Cuyp. He was actually a portrait painter but painted landscapes for his own pleasure. His Coastal Scene with Shipping and Cattle recalls Cuyp’s river landscapes with cows but in a more modest size – before that time Gainsborough had painted mainly woods and meadows. John Constable (1776-1837) made drawings inspired by Cuyp’s work and was the owner of engravings of cows made by Cuyp, which he used for his own studies of cows. In addition, he must have been very impressed by Cuyp’s cloudscapes; white or gray cloud formations against a clear sky (River Landscape with Rider and Cattle and Cattle and Shepherds) as well as thunderclouds. Constable’s own Cloudscapes, oil studies on paper, were a new phenomenon. Not only were they the sole subject of the depiction, but they also showed the changeable nature of weather conditions in an unprecedented lifelike manner.

Cuyp’s influence is still present in the river scenes and landscapes with cows of Augustus Wall Calcott (1779-1844). His famous colleague Joseph M. W. Turner (1775-1851) was also intrigued by the Dutchman. His Cattle in the River near Abingdon, a work from his early period, reveals his fascination with Cuyp’s cows, river scenes, warm sunlight and a subtle atmospheric perspective. Out of curiosity to see Cuyp’s birthplace, Turner made four trips to Dordrecht to discover where Cuyp had found his inspiration. It was there that Turner’s: The Dort packet boat in the Meuse (1818) was created – inconceivable without Cuyp’s Shipping on the Maas at Dordrecht (one of Cuyp’s best-known paintings) from the National Gallery of Art in Washington, now also on display in the exhibition. Even when Turner made sketches, he often had Cuyp in mind – on the sketches he would write down the name of his predecessor in various spellings.

But he also managed to surpass Cuyp. In his later work, he depicted land, water and sky using different colors in almost abstract compositions, which marked a completely original and extremely modern contribution to landscape art.

According to a review in a British newspaper from 1852, spectators were carried away by Cuyp’s Cattle and Shepherds into a haven of peace and tranquility, where you could forget your worries and struggles from the outside world. Peace and tranquility also radiate from Cuyp’s Landscape near Elten, a work of modest size that depicts the view of the Rhine and the Eltenberg from the hill of the Sternberg.

From that point of view, he decided to make a drawing during one of his trips; the painting itself was created in his studio. Two horsemen have dismounted their horses; one of them is drawing the view with a sketchbook on his lap. Next to him, a shepherd boy and some sheep are sleeping. The catalogue describes it is not a self-portrait. Like most of his colleagues, Cuyp did not belong to the high social class. Furthermore, he would not have traveled by horse, but by foot or by boat. But in Cuyp’s paintings, everyone, including the animals, is enjoying the view.

Cuyp’s attraction is just as strong today, although partly motivated by different reasons. His tranquil landscapes with cattle evoke nostalgia for the countryside and farming of the past. No factory farms or gigantic, straight-lined fields. No freeways with rushing traffic.

However, these idyllic images with the much-desired biodiversity also make people forget the misery of the conditions of farming life of that time – the poverty, the rough living conditions, and the hard labor. Interest in the realistic side of life on the countryside only emerged in the mid-nineteenth century. It is precisely the idealization of country life that was and is the great appeal of Cuyp and other landscape painters of the seventeenth century.

After three centuries, masterpieces of Cuyp from famous old English collections, are on view in Dordrecht for the first time

The exhibition includes masterpieces of Cuyp that partly stem from famous old English collections that, after three centuries, are on view in the Netherlands for the first time. From the collection of Queen Elizabeth II of England, for example, comes the beautiful The Ferry Boat. The Duke of Bedford in Woburn Abbey did not only lend the Landscape near Elten, but also the impressive Landscape with a View of the Valkhof, Nijmegen.

For the first time two paintings of View of Dordrecht are brought together, one from Los Angeles and the other from Leipzig. It has now been confirmed that they used to form one horizontal whole of about 164 centimeters and that the canvas was already cut in half at an early stage – perhaps the size was too wide for the new owner or two smaller paintings by Cuyp would bring in more money than one large canvas.

In addition to the many beautiful works by Cuyp himself and several other Dutch colleagues, there are many masterpieces on display by English painters whom Cuyp admired. For most of these special paintings it is the first time that they are on display in the Netherlands. The combination of the Dordrecht’s grandmaster with his English admirers is compelling.

Both Dutch and English specialists worked on the extensive catalog edited by Marlies Enklaar and Sander Paarlberg that was beautifully printed by WBooks. Their contributions are informative and relevant and – not unimportantly – enjoyable to read.

In the Light of Cuyp. Aelbert Cuyp & Gainsborough, Constable, Turner, The Dordrechts Museum, until 6 March 2022. 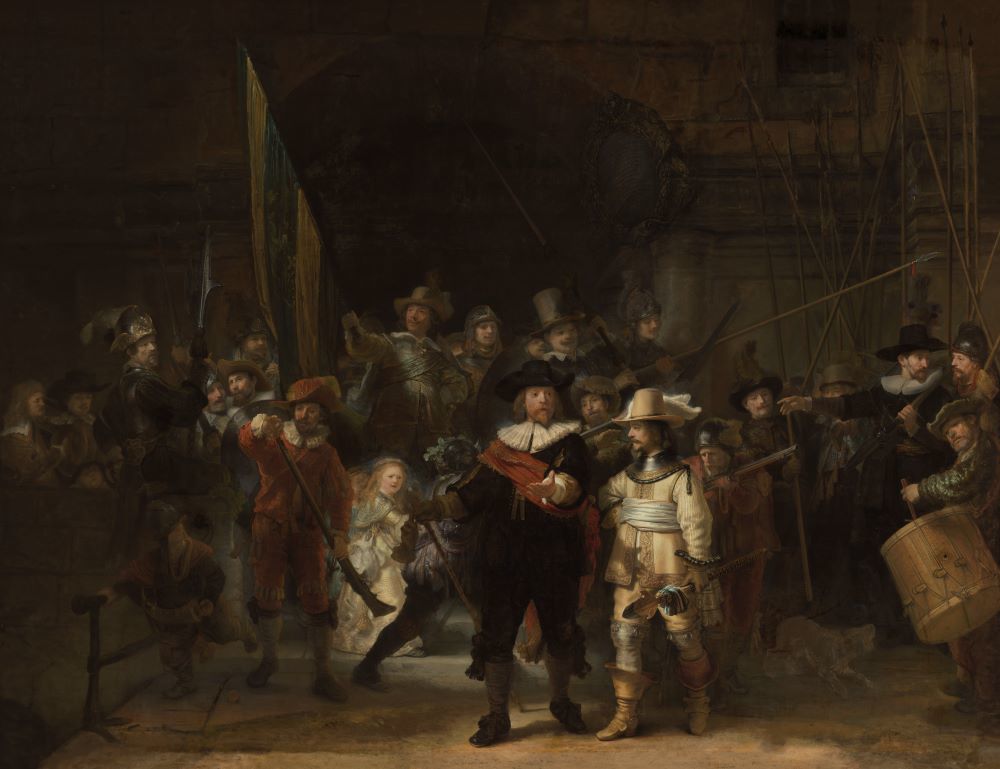