The Museum of Natural Sciences: Much More than a Dinosaur Dwelling

It is nearly impossible to walk past the Iguanodons. The Brussels Museum of Natural Sciences is home to Europe’s largest dinosaur gallery. But there is much more left to discover about both human beings and animals, ranging from the minerals’ magnificent displays of colour to the biodiversity in urban areas. The Museum of Natural Sciences is a must-see for every single person who cherishes our planet.

The Museum of Natural Sciences serves as the display window for the Royal Belgian Institute of Natural Sciences, a research institution with plenty of history and notoriety. Its world-renowned showpiece is the Dinosaur Gallery, the largest room in Europe entirely devoted to dinosaurs, which the museum elegantly accommodates. The Bernissart Iguanodons have become a household name. At the end of the 19th century, archaeologists discovered about thirty more or less complete Iguanodon skeletons at a depth of 322 metres inside a coal mine in the small Walloon village of Bernissart. As the bones were still in their original position, the skeletons could be displayed in lifelike poses. Today, a 300 square metre glass case with a height of about three floors protects this Belgian national treasure. From the authentic art nouveau spiral staircases, visitors are able to observe every detail of these prehistoric giants and find the answers to questions including, ‘Did they walk on two or four legs?’, ‘Did all of them belong to the same species?’, ‘How did they die?’; ‘Where did they live?’, and ‘Are there any left in Bernissart?’ 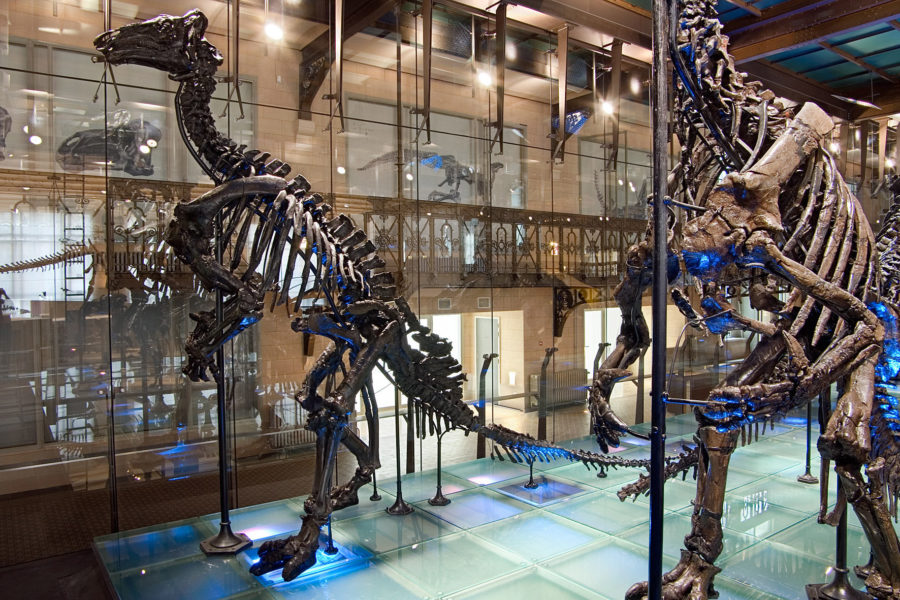 The Bernissart Iguanodons in the Dinosaur Gallery © Museum of Natural Sciences

The beautiful central hall encourages visitors to discover, examine, and yes, even touch. Children can run around among the fossilised giants with a Sauria map and the accompanying app, but there is more. Upstairs, there is a wonderfully designed interactive experience room called BiodiverCITY. Mainly aimed at young(er) children, the space deals with biodiversity in urban areas. As there are a lot of reading materials placed around the room, a bit of adult support is required. Visitors can get involved and play along thanks to computer simulations and interactive applications. This way, children can find out how they can effectively protect the city’s biodiversity. Instructions and further information are displayed around the room in three languages. The Dutch version, however, is often rather wordy and phrased in a wooden style, which is unfortunate. For that reason, the youngest Dutch-speaking visitors’ attention spans tend to wane easily.

This spring the new permanent Living Planet gallery will open. The gallery fills two floors on biodiversity, ecosystems and animal relations, and will show an enormous variety of animals (850 specimens in a parade of sorts!), from the smallest ant to the largest whale. The texts and interaction will be adapted to all ages.

As the hall is echoing with the screams of excited junior explorers and their teachers scolding them, escape to the top floor for the farthest journey into space ever made. You can travel all the way back to the beginning of life on our planet. An extremely fascinating and richly illustrated walk takes you on a journey through billions of years of life on Earth. This Gallery of Evolution zooms in on six crucial chapters of evolution: the Cambrian explosion, the abundant Devonian marine life, the conquest of the land during the Carboniferous Period, the Jurassic Period’s turbulent seas, the rise of the mammals during the Eocene Epoch, and the impact of humankind on the world today.

View of the Gallery of Evolution © Museum of Natural Sciences

Until the end of March 2021, the Gallery hosts the world première of a highly remarkable and impressive piece. Arkhane is the authentic fossilised skeleton of a newly discovered Allosaurus species, a predatory dinosaur that roamed the Earth about 155 million years ago. The skeleton is about 70 per cent complete, around 8.7 metres long and has striking hind legs, which are reminiscent of the claws of birds of prey. Similar to the other true-to-life skeletons on the ground floor, he seems to be able to run off or start roaring at any moment. 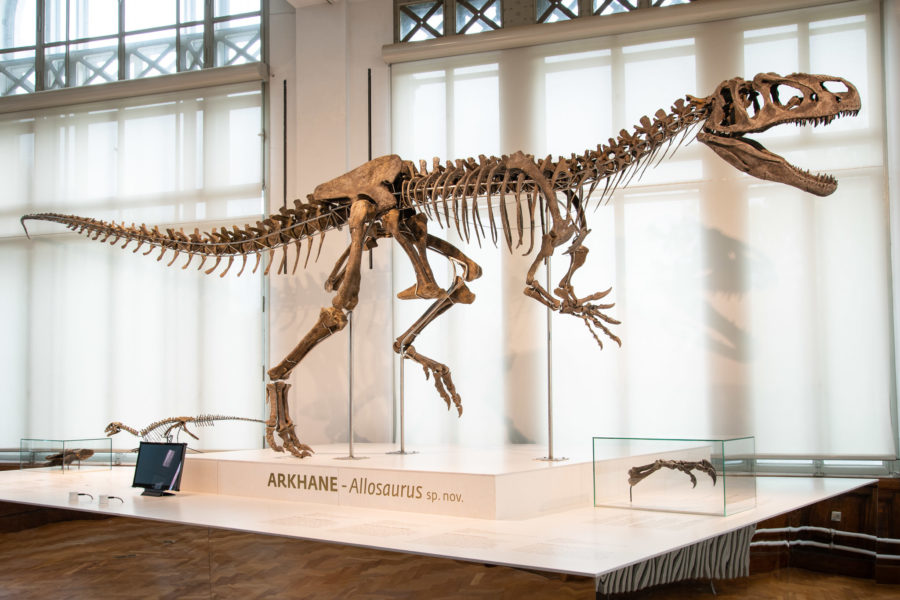 However, the still, much more modest fossils that bear witness to eras we can hardly image today can also fire our imagination. Beautiful imprints of shells, plants and animals, captured in stone, now reveal their fragility in minute details while having proved their sturdiness after years of resting deep inside the Earth’s layers. It really makes you think about how briefly man has been walking this Earth, as well as about how easily we can travel across geological time thanks to swift meetings like the one with the sea lilies. In fact, these are not actually lilies, but rather so-called crinoids, marine animals that belong to the echinoderms. They have been around ever since the Cambrian Period and, as a species, suffered enormously after the largest past mass extinction. The group made a comeback during the Mesozoic and appeared in shapes boasting extremely agile arms. These curious animals filter plankton from the seawater that flows past their arms. According to the sign, the majority attaches permanently to a fixed substrate such as a floating tree trunk or a reef. Animals that look like flowers; we can consider them to be ‘hybrid forms’, might be difficult to get our heads around, yet bear witness to an incredible amount of creativity, adaptability and the desire to survive.

Link up with Lucy

On the museum’s attractive basement floor, in the Gallery of Humankind, you can get a detailed overview of how humankind has evolved. With dimmed lights and against dark backdrops, you can track the evolution from the anthropoid to the hominid, including each subspecies and their specific characteristics. Every branch of the human family tree is represented on a gorgeous, lifelike, full-scale sculpture made from layers of wood. You can say hello to Lucy and compare the physical features of Cro-Magnon man with those of the Homo habilis or Erectus, or even to your own. Here too, fossils and 3D-reconstructions will lead you down the erratic path of seven million years of evolution. You will discover the adaptations that set our ancestors apart thanks to brief assignments including ‘match the teeth to the right jaw’, or you can admire different formalin-fixed brains.

Gorillas at the museum © Museum of Natural Sciences

This automatically brings you to the second part, which is dedicated to a highly complex machine, i.e. the human body. There, you are taught how a human being comes to be and grows. You can experience up close man’s evolution from conception to the various phases of life. You will learn about your ever-changing body, what it requires to survive, to function to the highest level and to reproduce… Thanks to numerous models and life-size plastic organs, informational flashcards, projections and experimental set-ups, this section is able to capture the attention of even the most recalcitrant adolescent.

It goes without saying that the entire approach to the topic is based on scientific insights, implying that this biological point of view is taboo-free. However, there is a distinct lack of reference to other aspects of science (i.e. sociology or psychology), or – at times – ethics. Especially when it comes to the role of women and their physical experience. The seemingly out-of-date images depicting subject matter such as ‘fat babies’, ‘the point of the female orgasm’, or ‘happiness through hormones’ seem rather uncalled-for, and without some much-needed context, they appear quite pointless.

Still, the museum makes an effort to move beyond the cliché by presenting a mix of seven hominids, both male and female, as the central image on the poster. After all, human evolution was far from a linear process, but rather a non-linear one, with many branches and crossovers, i.e. between Neanderthal and modern man. Moreover, Homo Sapiens is not placed at the centre of human evolution, as if he were its end product. Human evolution is still ongoing. This insight manages to considerably stretch our contemporary understanding of diversity.

Every single exhibition in this fascinating museum deserves your full attention and time. The temporary themed exhibits set up downstairs alone are deserving of a separate visit. The current one is on until the end of the Summer holidays and focuses on the Antarctic. The world’s coldest and most isolated continent serves as a barometer for the climate changes affecting our planet. From the start, you ‘travel along’ – so to speak – with the expeditions, during which different Belgian scientists and adventurers played major parts. From the dressing room where the scientists meticulously prepared themselves and armed themselves against the cold, you can experience this inhospitable yet enchanting continent. Magnificent audio and video recordings make you feel as if you are plunging into the Southern Ocean along with the seals and the penguins. Both the wealth and the vulnerability of these ecosystems are illustrated engagingly. There is no shortage of interaction: here, gap-fill booklets, games, observation exercises and a quiz are available as well. Also, the museum organises late-night openings and in the WWF photo booth, you can record your visit ‘on the spot’.

Each room and gallery in the Museum of Natural Sciences has its distinct atmosphere and take on things, which is cause for a lot of variation, and allows you to visit them separately. At the moment, part of the museum is under construction. Its history as one of the final truly Belgian institutions implicitly reflects the history of this country. You can sense it in the building and in the various historical periods it exudes, as well as in the collections themselves.

One example is the museum’s collection of minerals and crystals. In 1828, the heir apparent of the Netherlands, William II, and his spouse, tsar Alexander I’s sister, gifted the Brussels Museum – the Museum of Natural Sciences’ precursor – 808 Russian stones and minerals. This gift laid the foundations of a geological collection, which today consists of over 5,000 Belgian and 25,000 foreign pieces, among which there are almost 140 meteorites (four of which hit the Earth on Belgian soil), wonderous fluorescent minerals and even a rare little moonstone.

The Ishango bone is a bone tool and possibly the oldest mathematical object. The bone is on display in Brussels. © Museum of Natural Sciences

In sum, this museum is definitely worth a visit, for people of all ages. However, consider planning your visit during a quieter time, when the different rooms are not swamped by screaming schoolchildren and you can take your time to absorb all the information on offer. After all, the Museum of Natural Sciences teaches us where we came from, but simultaneously and unmistakably refers to every topic and challenge our planet has to deal with in the future and shows us how we can play our part.

Ghent University Museum Shows the Beauty and Doubt of Science