The Noble Beauty of the Terraced House

Rehabilitation of a traditional Dutch phenomenon

No house is more Dutch than the terraced house. Of course, you find terraced houses in many countries. In the last couple of centuries hundreds of thousands of identical, attached single-family houses have been built in the United Kingdom and Ireland too. But the Netherlands is the only country in the world where the majority of the population, around 10 million out of just over 17 million inhabitants, live in terraced houses. Yet this type of architecture has only recently come to be valued as it should. Time to redress the balance.

The terraced house is the stepchild of Dutch architecture. Architectural critics and historians barely give it any attention. The explanation is simple: it is precisely because the terraced house is so widespread in the Netherlands – more than four million of the approximately seven million houses in the Netherlands – it has become so ordinary that few people see how special it is. Add to that the fact that the Dutch intelligentsia see it as twee and bourgeois. 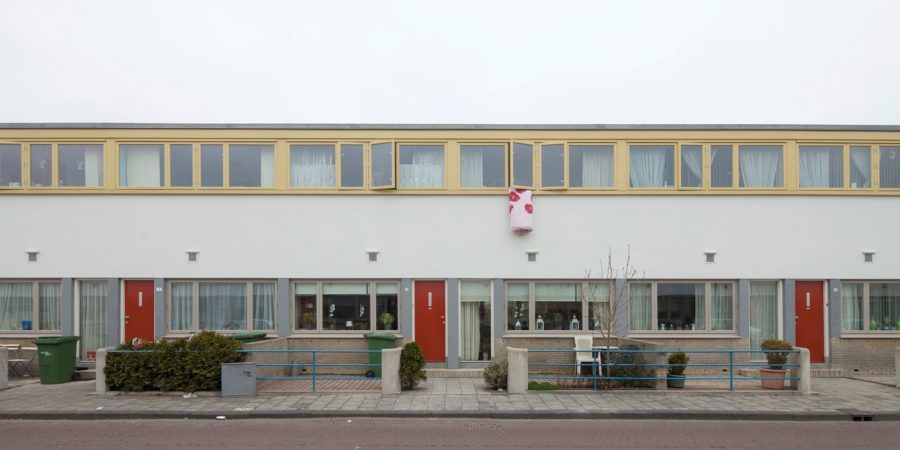 The Lindtstraat in Rotterdam © Luuk Kramer

So a book on the Dutch terraced house has been a long time in coming. Only after Germany published several books singing its praises, did two books on the subject appear in the Netherlands in 2013-2014. In one, simply titled Het rijtjeshuis (The terraced house), I myself described ‘the history of a traditional Dutch phenomenon’, accompanied by photos by Luuk Kramer. In the other, Kleine filosofie van het rijtjeshuis (A brief philosophy of the terraced house), philosopher Pieter Hoexum immerses himself in the question of why so many Dutch people, like him, live in a terraced house.

In Kleine filosofie van het rijtjeshuis, Hoexum stops short of venturing into Heideggerian reflections on the relationship between the Dutch words gewoon, meaning ‘ordinary’, and wonen, meaning ‘to inhabit’, which might be seen to indicate that habitation is very normal. He does point out that the terraced house fits the Dutch saying, ‘Doe maar gewoon, dan doe je al gek genoeg’ (‘Just act normal, that’s crazy enough’). In the terraced house he also sees the expression of the typical Dutch mixture of individualism and conformity, and of community spirit and isolation. In a freestanding house the residents are isolated, and in high-rise buildings they share not only their front door but also the stairs, lift or gallery, he observes. The terraced house is the golden mean: with their own front doors and often also their own gardens, the residents live ‘together alone’ in similar houses. 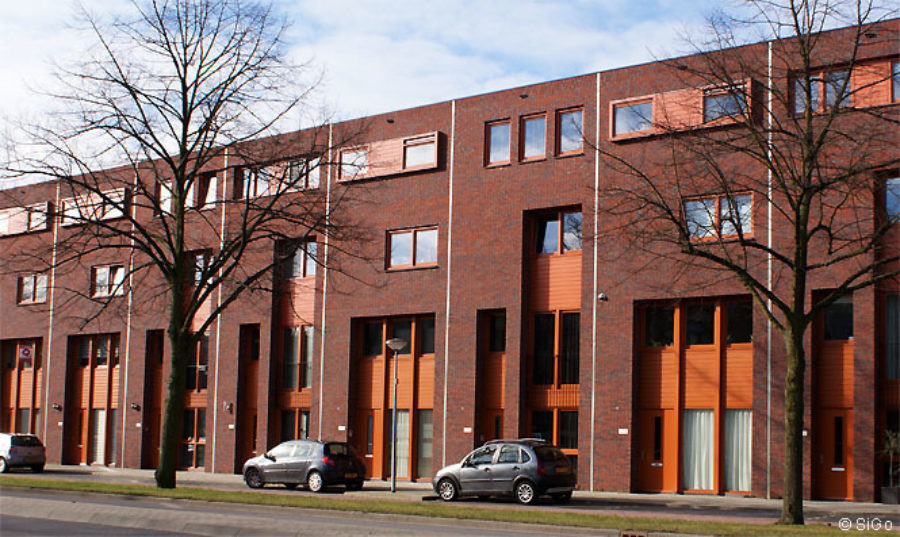 Four German authors made a similar observation in Das Niederländische Reihenhaus, an ode to the Dutch terraced house published in 1998. They see the Dutch terraced house as an expression of the ‘ideology of cosiness, normality and harmony in Dutch society’. While many people feel that the building of freestanding houses in Belgium, for example, brings out all kinds of lunacy and ugliness, terraced houses restrain the drive for individual expression. When it comes down to it, residents of terraced houses can’t go much beyond a special lamp by the front door or the addition of a conservatory.

From a town planning perspective, too, the Germans see terraced houses as the golden mean. Freestanding houses are islands in the green, they claim, but terraced houses almost always form street walls reminiscent of old cities with continuous facades. 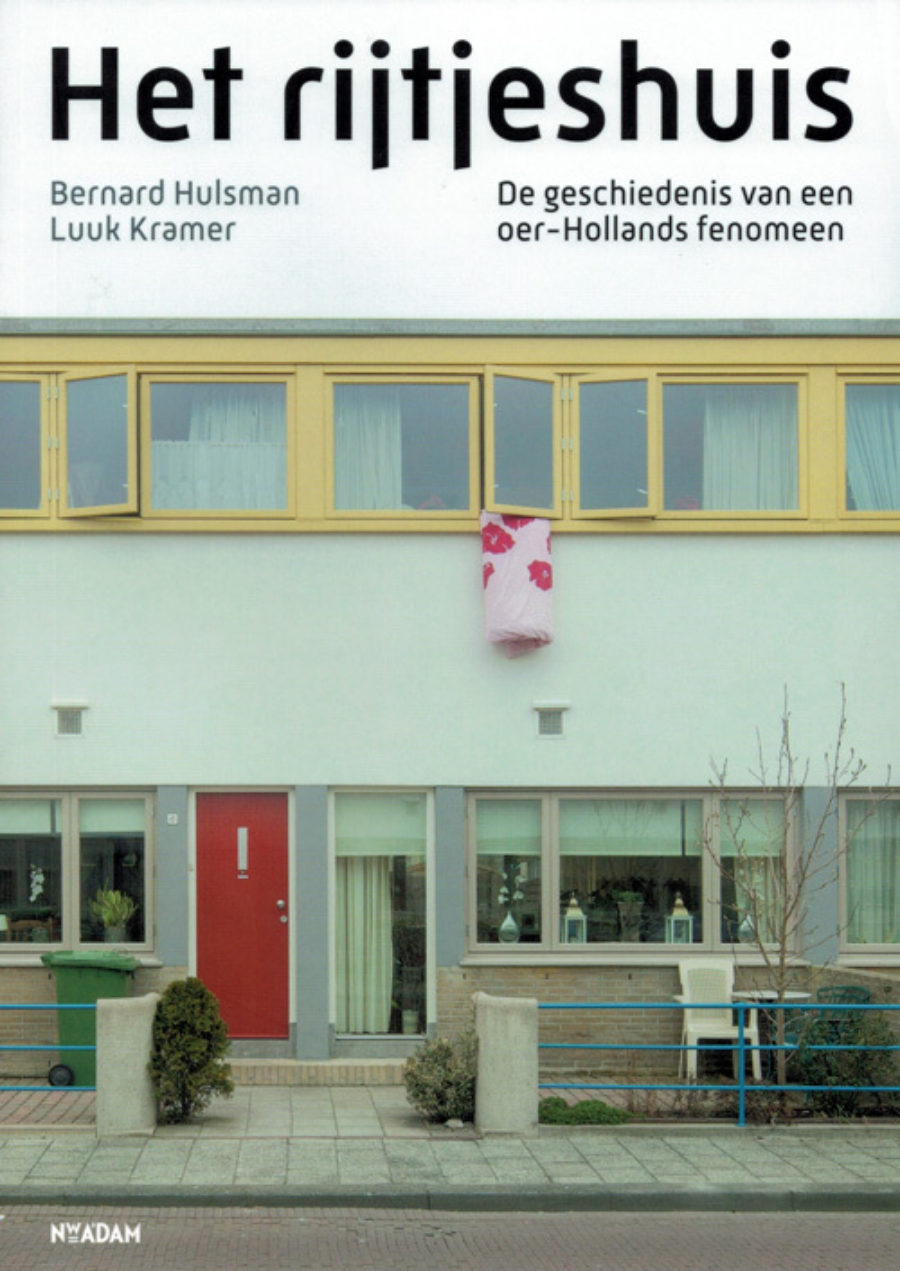 In Het rijtjeshuis I add to all these advantages the fact that the terraced house allows the majority of Dutch people to live affordably in a house with a garden. This has given millions of Dutch people a childhood with plenty of outdoor play. The modernist ideal of ‘light, air and space’ is not realized in districts of residential tower blocks in green surroundings, as Le Corbusier had envisaged in Ville Radieuse published in 1935, but in the sea of terraced houses in the Dutch suburbs.

Moreover the Dutch terraced house achieves far greater diversity than its boring reputation would lead us to expect. Many terraced houses also have their own simple, noble beauty, as Luuk Kramer’s photos reveal.

From hofjes to Nieuwe Bouwen

Add to that the fact that the Dutch terraced house has had a long and fascinating history. From the beginning it was linked to what is now known as ‘social housing’. The origin of the Dutch terraced house lies in the hofjes (courtyards) built from the fifteenth to the twentieth century in virtually every old Dutch city of significant dimensions. Many old hofjes, almshouses generally built for poor widows, commissioned by philanthropists and church associations, are structured like cloisters and consist of identical, minuscule houses around a communal garden. 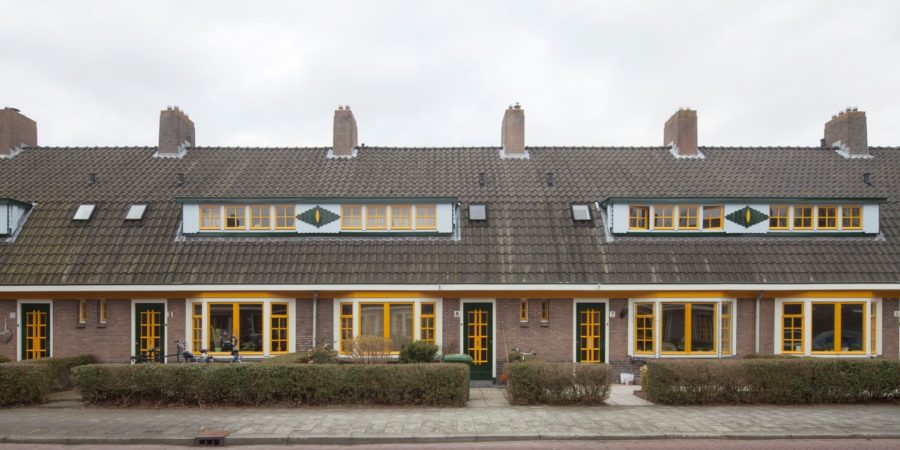 The Beyerinckstraat in Delft © Luuk Kramer

Nevertheless, during the Dutch Golden Age (seventeenth century) the terraced house was not nearly as common as it is now. Until a long way into the nineteenth century the private residential house remained the most important raw material of Dutch cities. Only in the second half of the nineteenth century, when industrialisation caused a population shift from the countryside to the cities, where the newcomers exceeded the housing capacity, did the terraced house begin its rise.

Enlightened manufacturers had ‘garden villages’ with terraced houses built for their labourers, such as the Agnetapark in Delft in 1885. The housing associations, founded in the second half of the nineteenth century to build good houses for labourers, also built a great many ‘social rental houses’ in the form or terraced houses, particularly in the small and medium-sized towns.

The Housing Act of 1901, the legal cornerstone of Dutch social housing, which among other things provided subsidies and cheap loans for the housing associations, gave social housing new drive. Many Dutch cities built garden districts for ‘the less well off’, often deploying the big names of Dutch architecture for the task. During the interbellum, for instance, Rotterdam acquired Tuindorp Vreewijk, which was designed by H.P. Berlage, M.J. Granpré Molière and others.

The rise of the terraced house for the less well-off was temporarily interrupted by the lengthy economic crisis of the 1930s. Garden districts were still built, but they were generally intended for the middle class. Social housing was hit hard by government cuts. 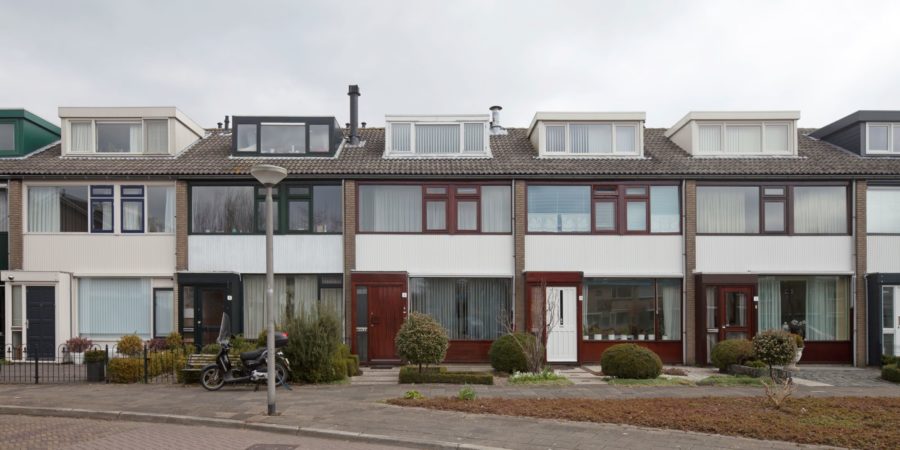 After World War II the building of ‘social’ terraced houses resumed. In the early years these were still traditionally built, but with the encouragement of the Ministry of Housing, prefabrication and standardisation made their entrance into Dutch house building during the Reconstruction period. This led in the end to the breakthrough of modernism in Dutch architecture. Where Nieuwe Bouwen, as modernism was called in the interbellum, was a marginal (if vociferous) phenomenon in Dutch architecture before World War II, after 1945 ever more architects converted to the ‘business-like’ style of modernism which turned out to fit well with standardisation. 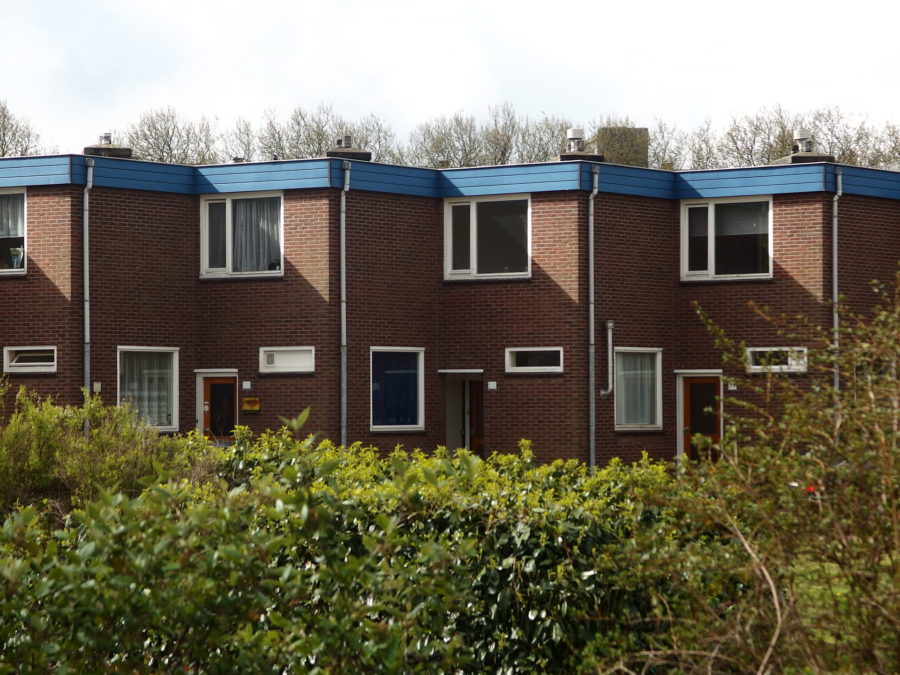 Bluebanddorp is a neighborhood in Slotervaart; designed by dutch modernist architect Frans van Gool and built in 1959. The houses are also known as "Zaagtandwoningen", meaning "sawtoothhouses", because of the characteristic salient form of the frontside of the houses. The name "Bluebanddorp", originally a nickname, derives from the blue eaves of the houses. © Mark Ahsmann

Miraculously enough the industrialisation of housing in the Netherlands did not end the construction of social housing in the form of hofjes. In Frankendael, for example, the first post-war garden district in Amsterdam designed entirely by Nieuwe Bouwers, modernist architecture went hand in hand with traditional city architecture. In fact, all genuine modernist terraced houses in Frankendael consist of prefabricated building elements, but in contrast with the dictates of modernist urban planning, they are not drawn up in parallel strips with open spaces in between. Even Frankendael, which due to the off-white houses with flat roofs was nicknamed ‘Jerusalem’, consists of hofjes, with a communal garden closed off on all four sides by blocks of terraced houses.

In the 1950s the courtyard structure of Frankendael became the normal way of building new neighbourhoods with terraced houses all over the Netherlands. At the same time the doorzonwoning also came into being, a type of terraced house with large windows, built in the hundreds of thousands in the Netherlands during the 1960s and 1970s. All doorzonwoningen have a similar layout. On the ground floor on the street side is the living room, with the dining room and kitchen bordering on the back garden. Next to the living room is a corridor, with a toilet and a staircase with a cellar below. The stairs lead up to a floor with two or three bedrooms and a bathroom. Under the gabled roof is an attic floor.

The doorzonwoning is a concept in the Netherlands. It is seen not only as the peak of standardisation in construction, but also as the zenith of middle class living. Henk and Ingrid, the typical Dutch couple, in their doorzonwoning with an Opel in the driveway, are the proverbial mass workers and common butt of stand-up comedians’ jokes. 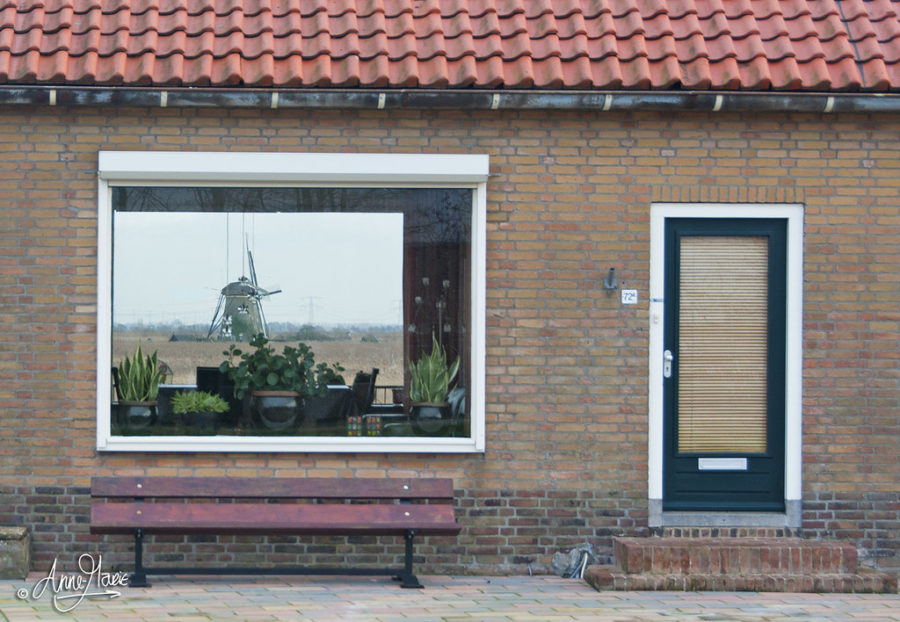 In fact the doorzonwoning is so well made that according to some builders there is nothing to improve, in the 1960s the terraced house had not yet become the residence of the majority of the Dutch population, because in the Netherlands of the post-war period the Charte d’Athènes, Le Corbusier’s manifesto for modernist urban planning from 1943, gained great influence. Increasing numbers of urban planners became convinced that high-rise buildings were the best form of mass residential housing.

But after the Bijlmermeer, the extreme Corbusian high-rise district for 100,000 residents, built around 1970 in Amsterdam, had descended into a problem district plagued by vandalism and criminality within five years, the urban planners radically changed course. Between 1973 and 1977, when, under the progressive cabinet of the social democrat prime minister Joop den Uyl, the Dutch welfare state reached its peak, the terraced house finally broke through as the house of the masses. From 1975 it was not tower blocks but terraced houses that formed the most important raw material for new residential districts. They remain so today. In fact most terraced housing districts even in the twenty-first century have retained their courtyard structure, so that the majority of the Dutch population now live in neighbourhoods resembling cloisters.