What unusual materials did Rembrandt paint with? What did his social network and love life look like? And what do we know about his early years? Thanks to the many exhibitions, events and conferences organized in 2019, marking the 350th anniversary of his death, we gained new insights about one of the greatest Dutch painters.

The Rembrandthuis, Amsterdam presented Laboratorium Rembrandt, case studies involving historical ambiguities, authorship, and technical analyses. The viewer is invited to participate in the kinds of decisions made by curators. For example, the 1637 portrait on loan from the Royal Museum for Fine Arts, Antwerp shows a man wearing a skullcap, seated in a wooden armchair and with books in the background, presumably a preacher – but who? The sitter has been identified as Eleasar Swalmius, but through records of ownership, provenance and another portrait, that identification is now questioned. The visitor is asked whether the sitter may be one of his two brothers, also preachers, At last count, more viewers were ‘unable to decide’ which of the two brothers was represented. 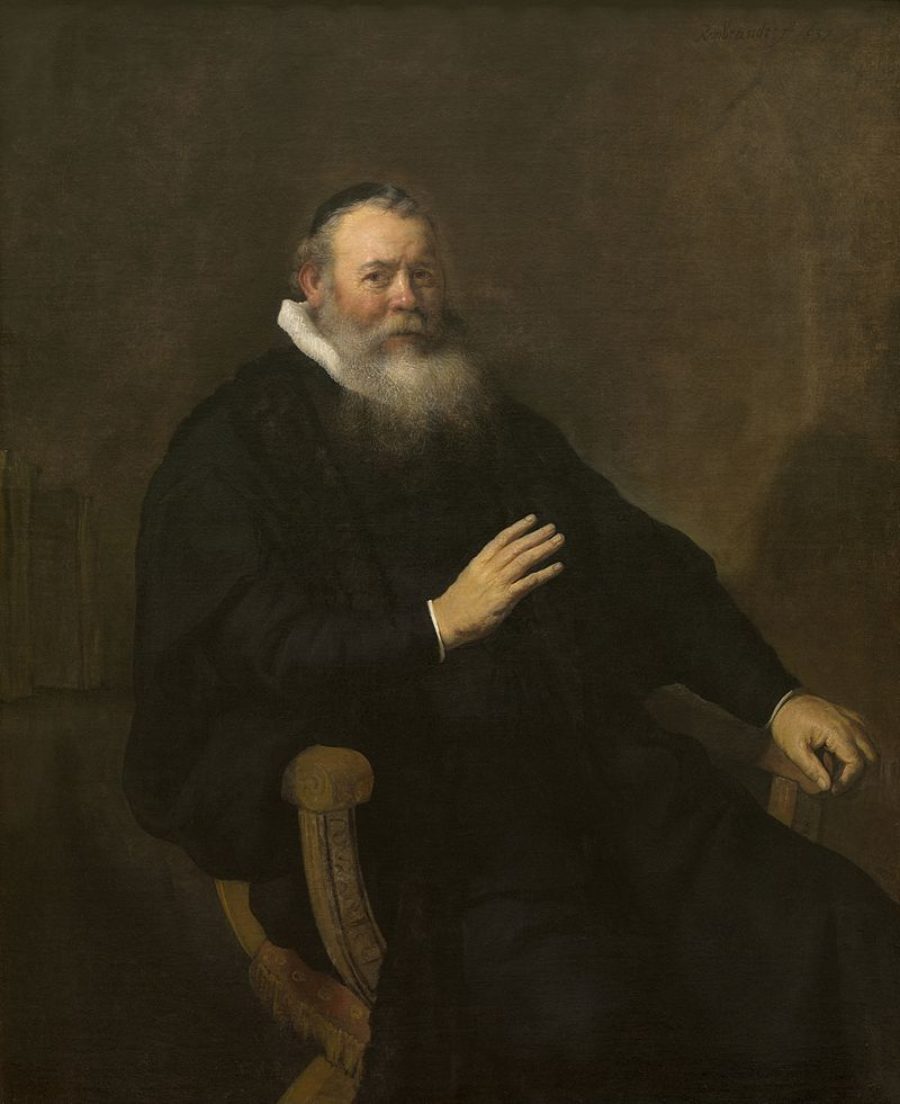 A landscape with the Flight into Egypt is based upon a Rembrandt landscape etching, and qualities of the foliage, tree contours and brownish tones are reminiscent of Govert Flinck. But visitors’ opinions favour “anonymous” rather than attributing the painting to that artist.

A third case emphasizes Rembrandt’s experimentation. He added lead oxide to thicken impasto, as in the florette on Maerten Soolmans’s shoe, thus achieving a sculptural layer of paint as well as the illusion of lace. In this and other analyses, conservators demonstrate that Rembrandt applied pigment and admixtures that were not used previously. This underscores Rembrandt’s unusual materials for effect. Among the next Rembrandthuis shows is the summer 2020 Hansken, Rembrandts Oliphant. Born in Ceylon, Hansken arrived in Holland in 1633, toured Europe, received sensational popular press, and was portrayed by artists. 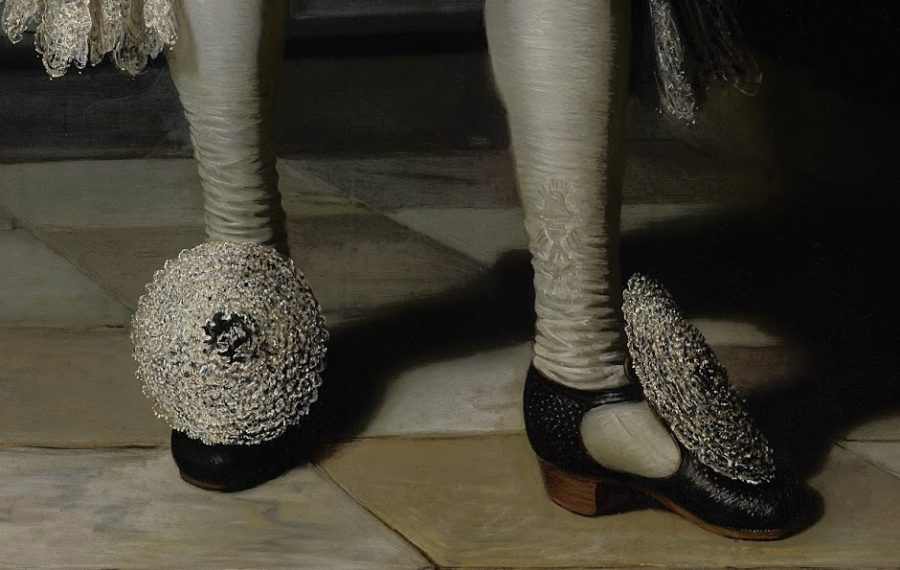 Two exhibitions explored the artist’s early years. At the Agnes Etherington Art Centre, Queen’s University, Kingston (travelling to Edmonton, Regina and Hamilton), the often vexing relationship between Jan Lievens and Rembrandt is tightly examined in Leiden circa 1630: Rembrandt Emerges. Based upon the Alfred and Isabel Bader collection, the essential and distinctive qualities of early Rembrandt and Lievens are set forth by Jacquelyn Coutré; Lievens reacted to and absorbed current directions in painting with alarming speed, and Rembrandt arrived more laboriously at integrated complex compositions. Essays on less examined topics augment the early careers of these two rising talents: Stephanie S. Dickey on printmaking in Leiden, Piet Bakker on the Leiden art market, and Janet Brooke on collecting Rembrandt in Canada.

The Lakenhal, Leiden, organized Jonge Rembrandt – Rising Star (travelling to the Ashmolean, Oxford), which includes Rembrandt’s teachers Jacob van Swanenburg and Pieter Lastman, Jan Lievens, and the early pupils Gerrit Dou, Jacques de Rousseaux and Isaac de Jouderville. Fully displayed are the variety of painterly and graphic application and range of subjects from Rembrandt’s presumed earliest panel, Sight: The Spectacle Seller, to his fashionable portraits of the 1630s. The History Painting with Self Portrait (various subjects proposed) and Stoning of Stephen are often considered as pendants in secular and sacred history, perhaps because they are the same size and are signed with the date 1626. However, these clash visually. The Stephen is by invention a dynamic and violent action of a coordinated team against a defenceless victim, with onlookers at various levels, while the History Painting shows Rembrandt trying to figure out placement and groupings of figures upon a stage. This reviewer wonders if the stiff History Painting might not be earlier, and if the date were added later than its assumed creation. 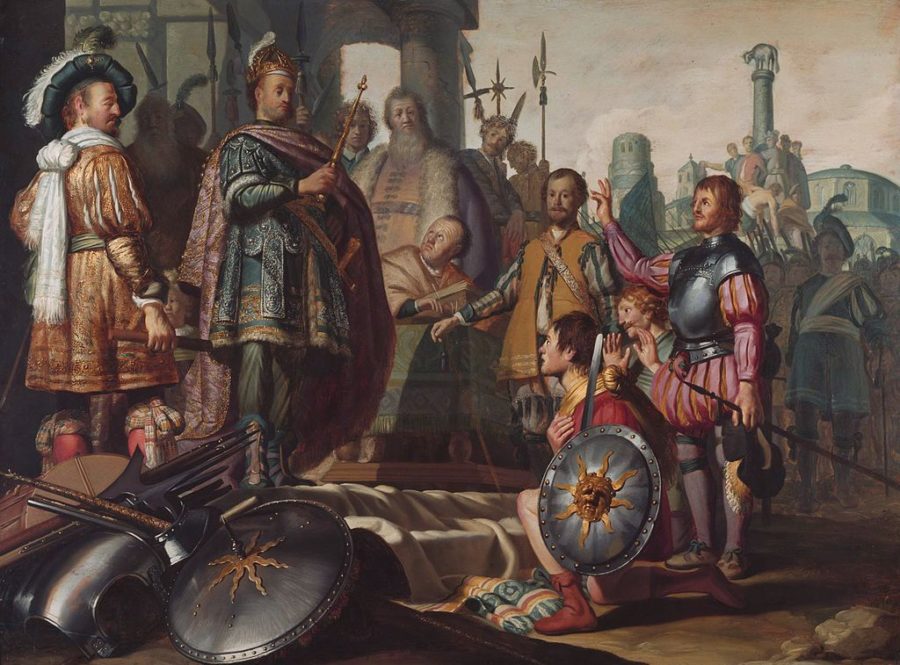 The Judas Returning the Silver of 1629 and Emmaus contrast villainous despair and revelatory divinity. The Lakenhal hanging together of the abductions of Proserpina and Europa is unique in our lifetime. Yet twice the two hung together in Berlin, at the Gemäldegalerie around 1911 for four years, and again in 1930 at a temporary Rembrandt exhibition. The essay by Katja Kleinert notes their complementarity. As mythological cabinet pictures, they are designed to delight. The brilliantly blue sky of the Proserpina is achieved with expensive lapis lazuli, perhaps used with anticipation that the panel would enter the collection of Stadholder Frederik Hendrik. The pigments used in the Europa are conventional and applied more quickly. Proserpina’s companions pull strenuously upon her robes to prevent Pluto’s chariot from moving forward; Pluto prepares to drive his chariot into the dark underworld, but with the slack gold rein and the wheel appearing still, the chariot may not yet be in motion. As Europa becomes aware of her predicament, her friends react in a sequence, the nearest more alarmed than the distant maid and coachman. In both panels, Rembrandt considered the action unfolding in time, the specificity of place, and the precise narratives of Roman poetry. 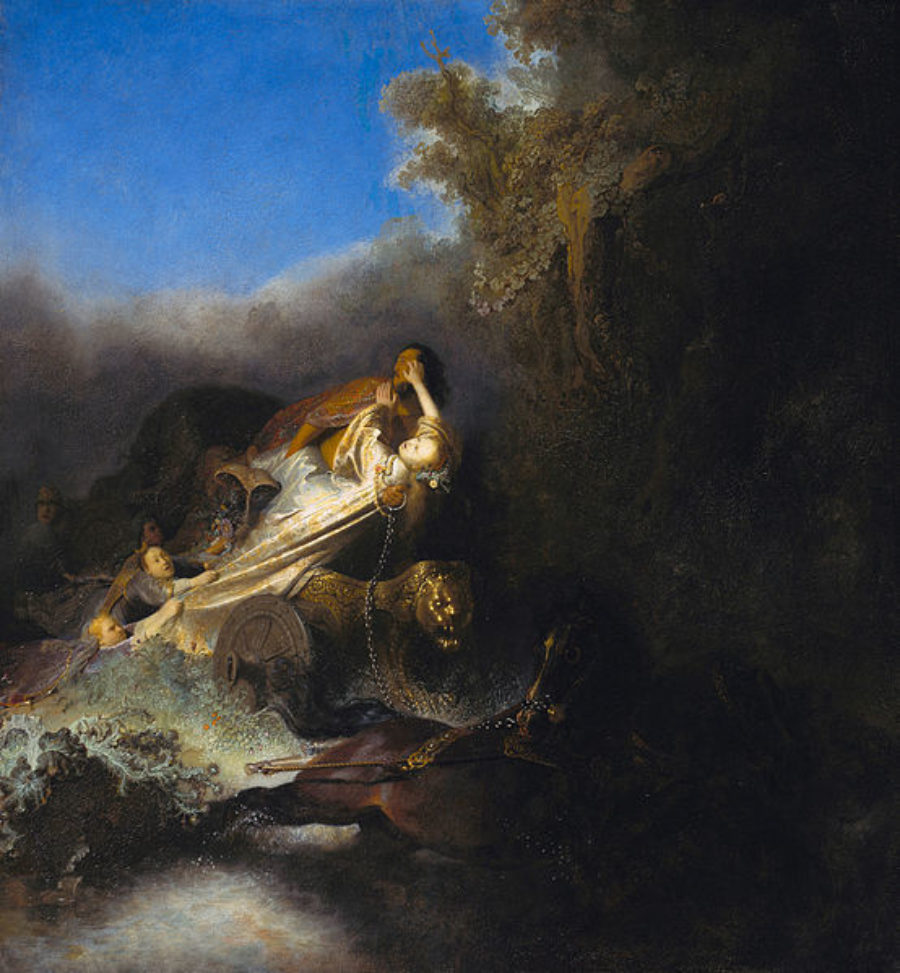 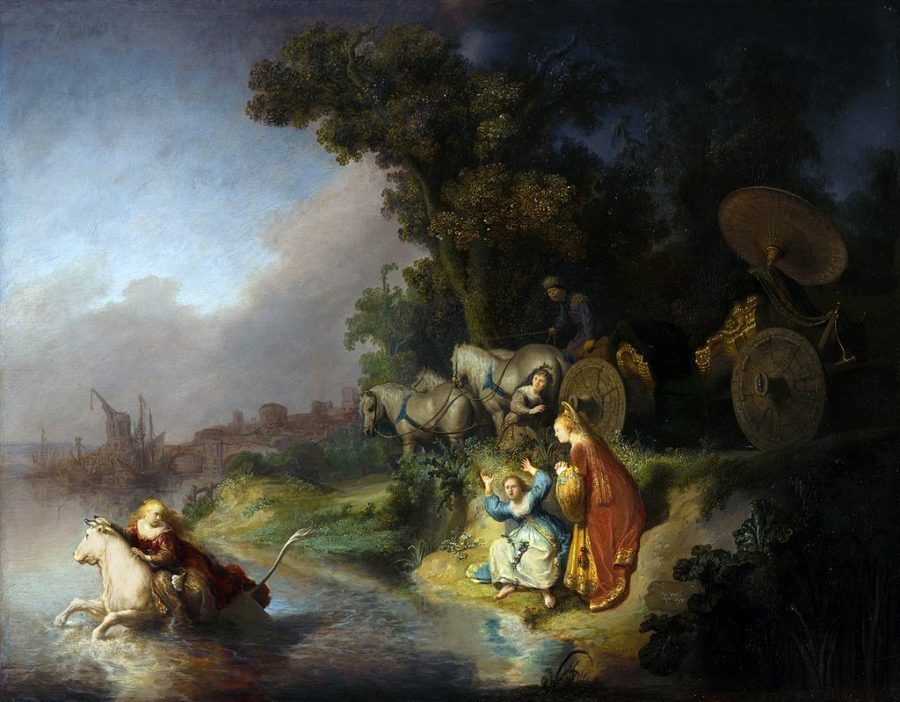 The contextualization of Rembrandt in family, friendships, workshop and contemporary Amsterdam concern the remaining exhibitions. The Fries Museum presented Rembrandt and Saskia: love and marriage in the Dutch golden age, which took the well-off and educated Leeuwarden Uylenburgh family as a touchstone to explore courtship, adornment, dress, and customs of marriage and family. These are examined with particular focus on Saskia and Rembrandt. Their wedding would have featured an appropriately lavish celebration and could have included five feasts spread over two weeks, with extravagant food, drink, and clothing. Connections between Leeuwarden and Amsterdam were close within Rembrandt’s artistic milieu and Saskia’s relations. The Uylenburgh family included Hendrick, in whose art business Rembrandt worked in his early Amsterdam years, and Aeltje and her husband the Mennonite preacher Jan Cornelis Sylvius, whose portraits were painted by Rembrandt. 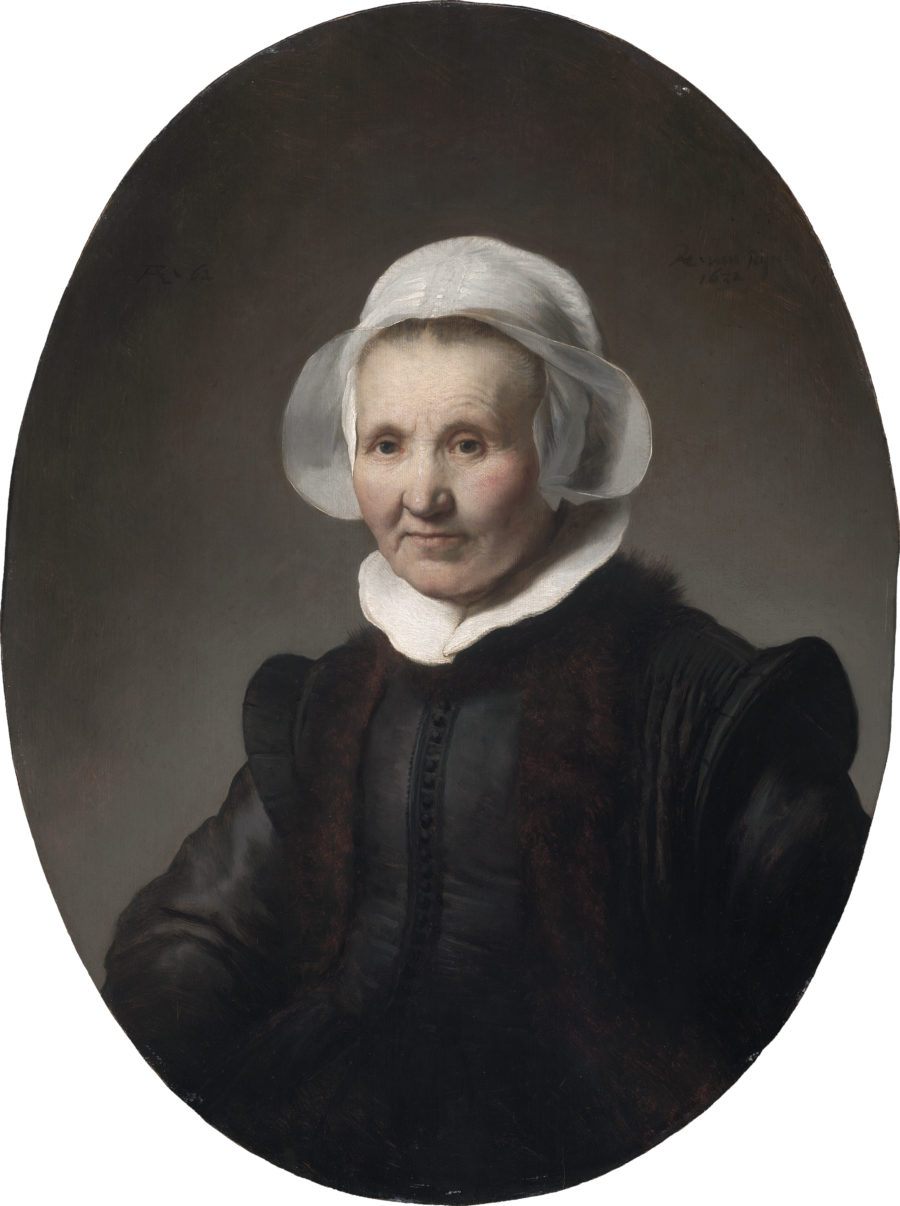 Before they relocated to Amsterdam, Govert Flinck and Jacob Backer apprenticed to the painter and art dealer Lambert Jacobsz, himself from Amsterdam with ties to Lastman’s circle. These connections demonstrate how family and professional ties fostered Rembrandt’s success. The Rembrandthuis Rembrandt’s Social Network: Family, Friends and Acquaintances further examined these relations, throughout the artist’s career, domestic situations, and financial circumstances. It featured a newly discovered manuscript by Jan Six that compiled of proverb-like statements about friendship, thus enhancing the concepts and practicalities of Rembrandt and his relationships not only with Six, but also with other connoisseurs and collectors.

Although Flinck, Ferdinand Bol, and Nicolaes Maes are consistently featured within the Rembrandt circle, exhibitions devoted solely to them are occurring only now. In 2017, the Rembrandthuis and the Amsterdam Museum jointly organized Ferdinand Bol en Govert Flinck, and in 2019-2020, the Mauritshuis and National Gallery host Nicolaes Maes. Flinck joined Rembrandt’s workshop in the early 1630s, Bol in the later 1630s, and Maes in the late 1640s to 1653. Especially in their early work, these three looked to Rembrandt’s inventions of episodes in the lives of Abraham, Jacob, Manoah, Gideon, and Christ to craft their own solutions to figural groups and emotional nuance. Each in his own way sought subjects and painterly means to mark independence from Rembrandt’s studio. 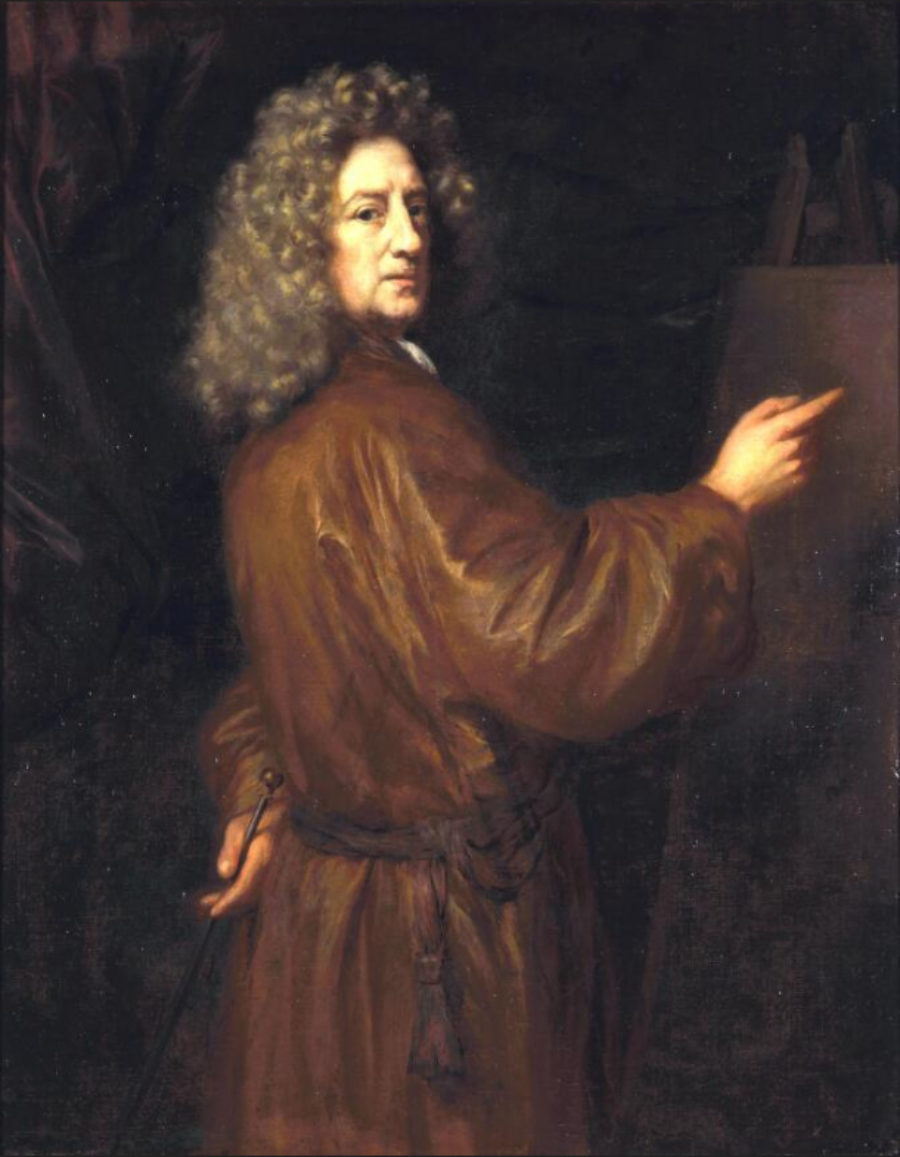 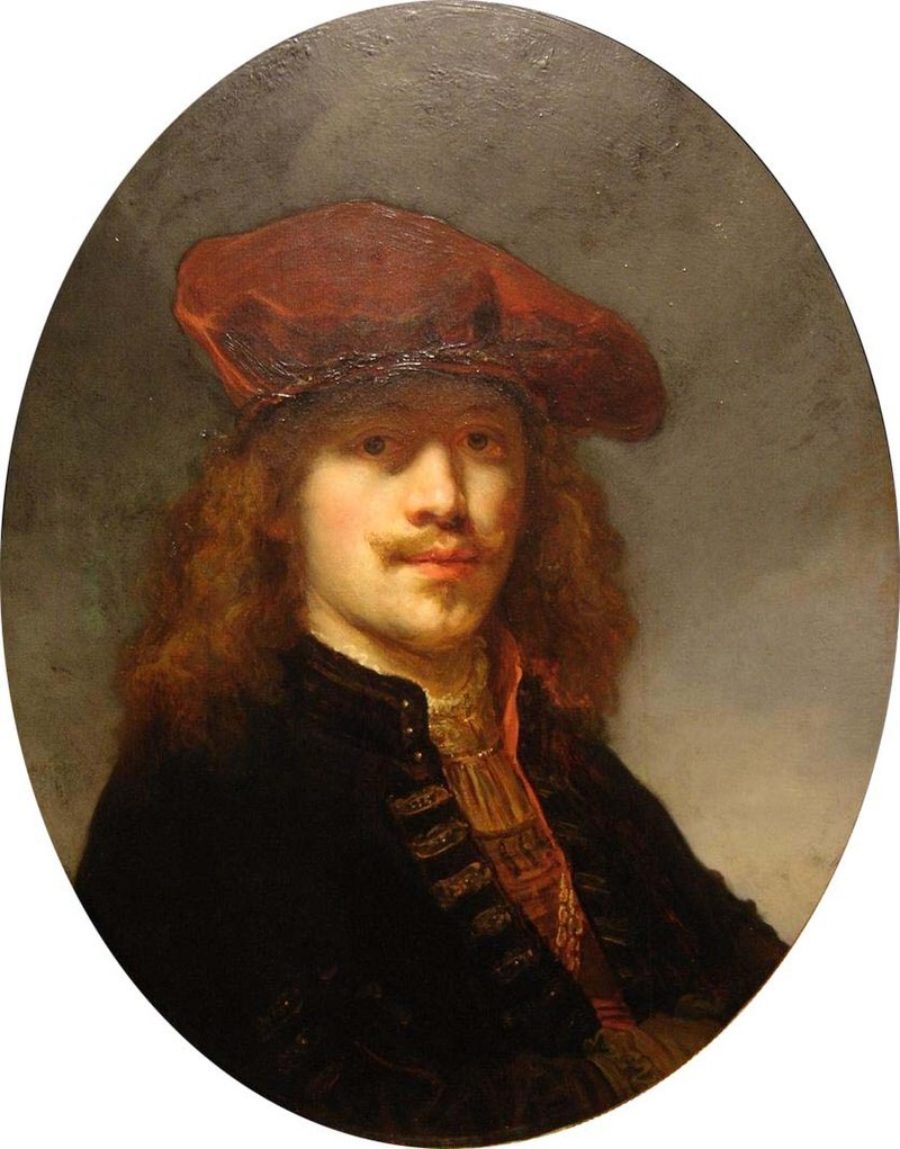 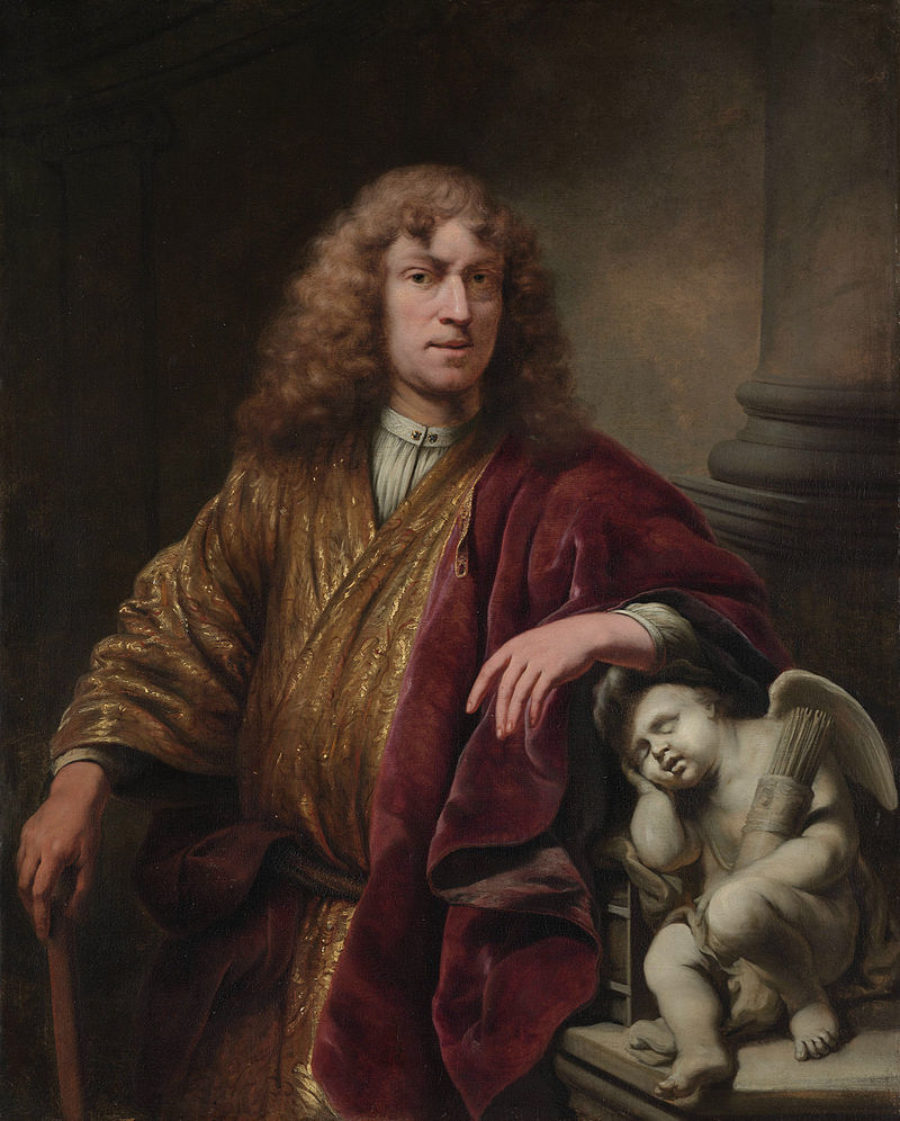 After producing shepherds, shepherdesses and tronies in fanciful costume, Flinck portrayed poised children, full length in a landscape or interior, and portraits with allegorical attributes. He gained important commissions from civic associations, Amalia van Solms and her family, and the Amsterdam Town Hall. In Rubens’ grand paintings that circulated in print, Flinck found guidance for celestial cherubs. His early death in 1660 meant that his designs for the Batavian series of lunettes for the Town Hall were discarded, with the exception of the Oath of Civilis, which, finished by Jurian Ovens, replaced Rembrandt’s rejected contribution.

Bol portrayed himself in exotic clothing, in the vein of Rembrandt, but at the same time, he painted the Amsterdam elite in their best finery and mythologies with idealized figures. However, when he received grand commissions for the Admiralty, Jacoba Lampsins’ Utrecht salon, and the Amsterdam Town Hall, Bol looked at earlier compositions by Amsterdam history painters, including Rembrandt. Bol singularly among the Rembrandt pupils took up etching and never made a complete break in his prints and drawings from Rembrandt’s style and invention. 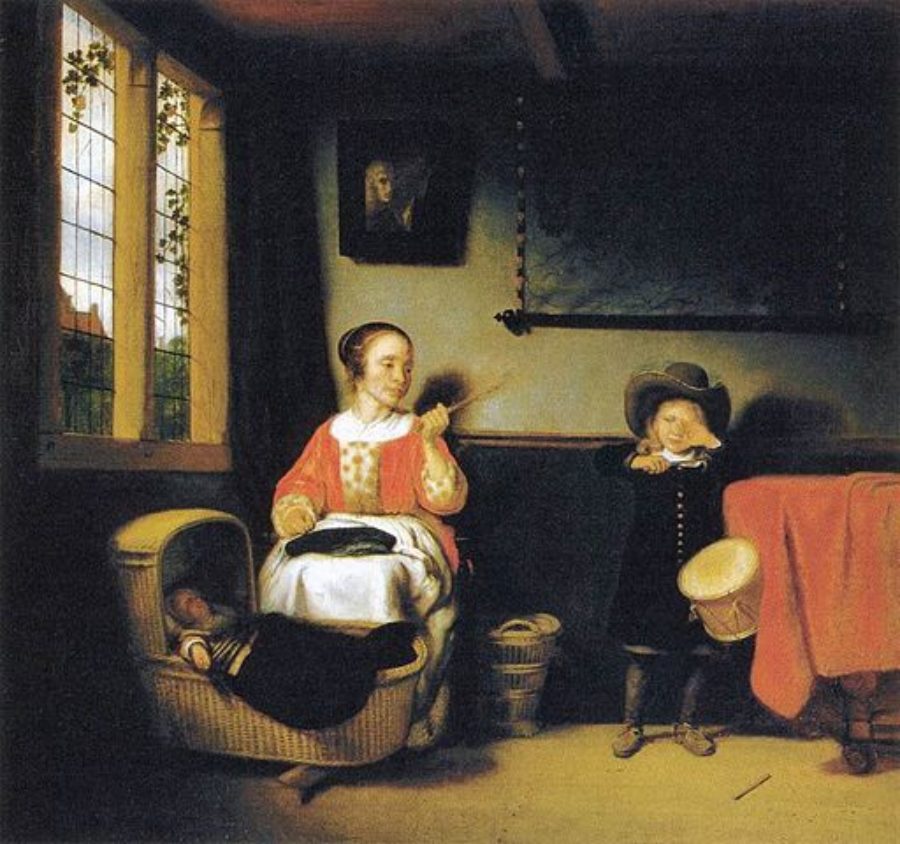 Maes’ work neatly falls into three stages: early biblical histories reflecting Rembrandt’s inventions, household scenes with servants or women busy with tasks, and portraits. Among Maes’ most endearing and influential imagery is the eavesdropper in the household of amorous intrigue, which involves the viewer in potentially duplicitous relations. His appealing scenes of women tending children or making lace seem to show daily life at its most serene. One painting shows a more likely reality: in The Naughty Drummer, the mother scolds her crying little boy for playing his drum while her baby sleeps, and the mirror reflects the self-portrait of the artist himself. But why didn’t she take away the drumsticks in the first place? In their later work, all three of these supremely talented artists portrayed graceful well-to-do clients with bright palettes and fluid brushwork. They accommodated current market trends as they contributed to them.

The Thyssen Bornemisza presented Rembrandt and Portraiture in Amsterdam 1590-1670, a survey from the restrained elegance of Nicolaes Eliasz Pickenoy and Thomas de Keyser to the flamboyance of Flinck, Maes and others under the sway of the international and courtly Antony van Dyck. Essays about economics and aesthetics concerning the commissioning and function of portraits enhance this discussion. Consistently and in contrast to his contemporaries, Rembrandt infuses narrative into his portraits of families, civic guard, governing boards, and historical characters. 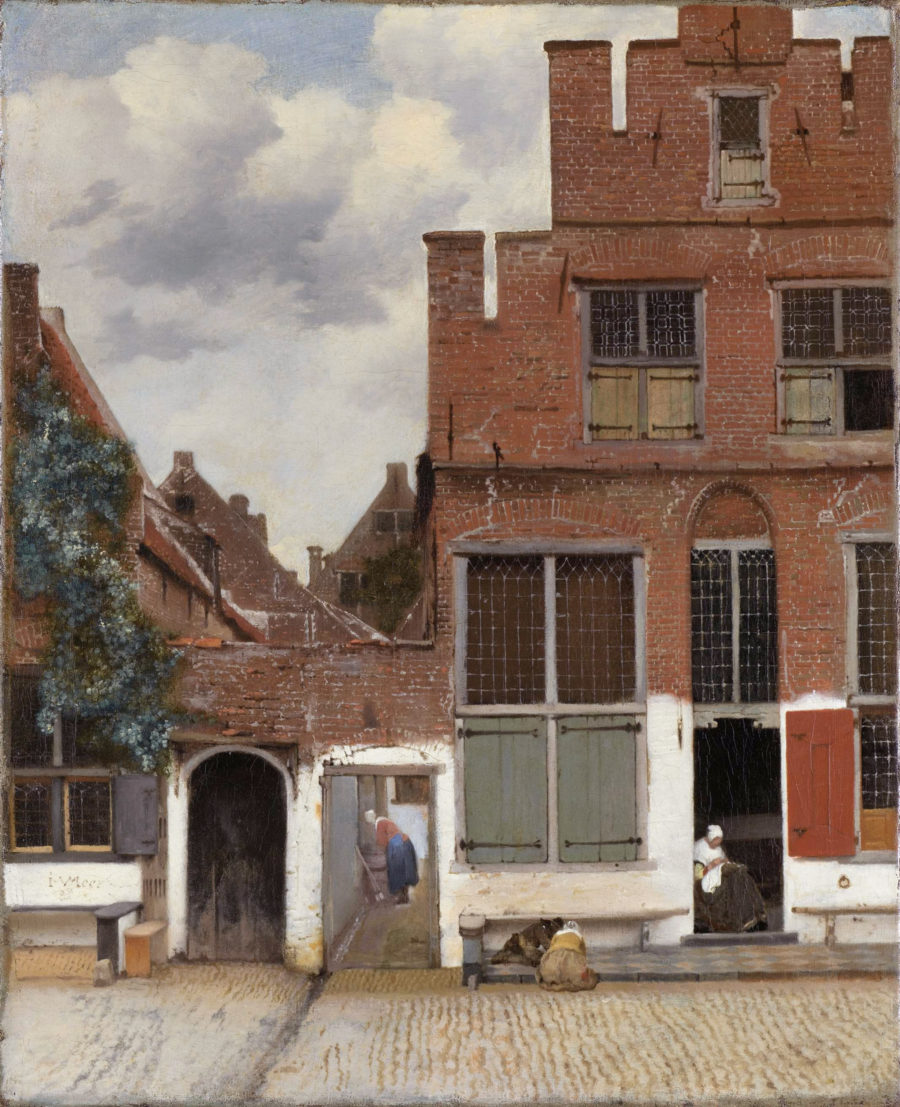 Johannes Vermeer, Little Street, between circa 1657 and circa 1658, Rijksmuseum, Amsterdam © Wikimedia Commons

In all such Rembrandt years, the Rijksmuseum is a foremost participant. This one brought not only all the museum’s prints, paintings, and drawings on view, but also a collaboration with the Prado for Rembrandt Velásquez, 26 juxtapositions of Spanish and Dutch artists for provocative comparisons between paintings not usually considered together. Austere severity contrasts with outrageous luxury in two pair portraits of the early 1630s: Velásquez’s Doña Antonia de Ipeñarrieta y Galdes and her son Luis and Don Diego del Corral y Arellano, and Rembrandt’s Marten Soolmans and Oopjen Coppit. Another revealing juxtaposition is Velásquez’s View of the Gardens of the Villa Medici and Vermeer’s Little Street.

In these small works, the artists strive for accuracy in capturing a small part of a larger identifiable view, of cultivated landscape or constructed city. Both painters are rigorously faithful to their perceptions, but express them in opposing ways. Velásquez feathers the leaves and branches of the trees to blend with the sky and smooths the deteriorating boards that close off the grotto entrance. With tiny dabs of pigment, Vermeer gives a glowing illusion of bricks and flaking white trim. Velásquez’ workmen are suggested with a few strokes, while Vermeer’s working women and playing children are blocked out in colour. With essays by author Cees Noteboom, critic Hans Hartog de Jager, and curator Gregor Weber, the accompanying publication prods the viewer into questioning the defining qualities of the Spanish and Dutch “schools” of painting.

The Rembrandt year continues into 2021, with Becoming Rembrandt, an exhibition effectively proceeding from the two that examine the young Rembrandt to explore Rembrandt’s rise to international fame, organized by the Städel Museum and National Gallery of Canada. The star power of Rembrandt is strengthened by these exhibitions, even as the excellence of his contemporaries is recognized. 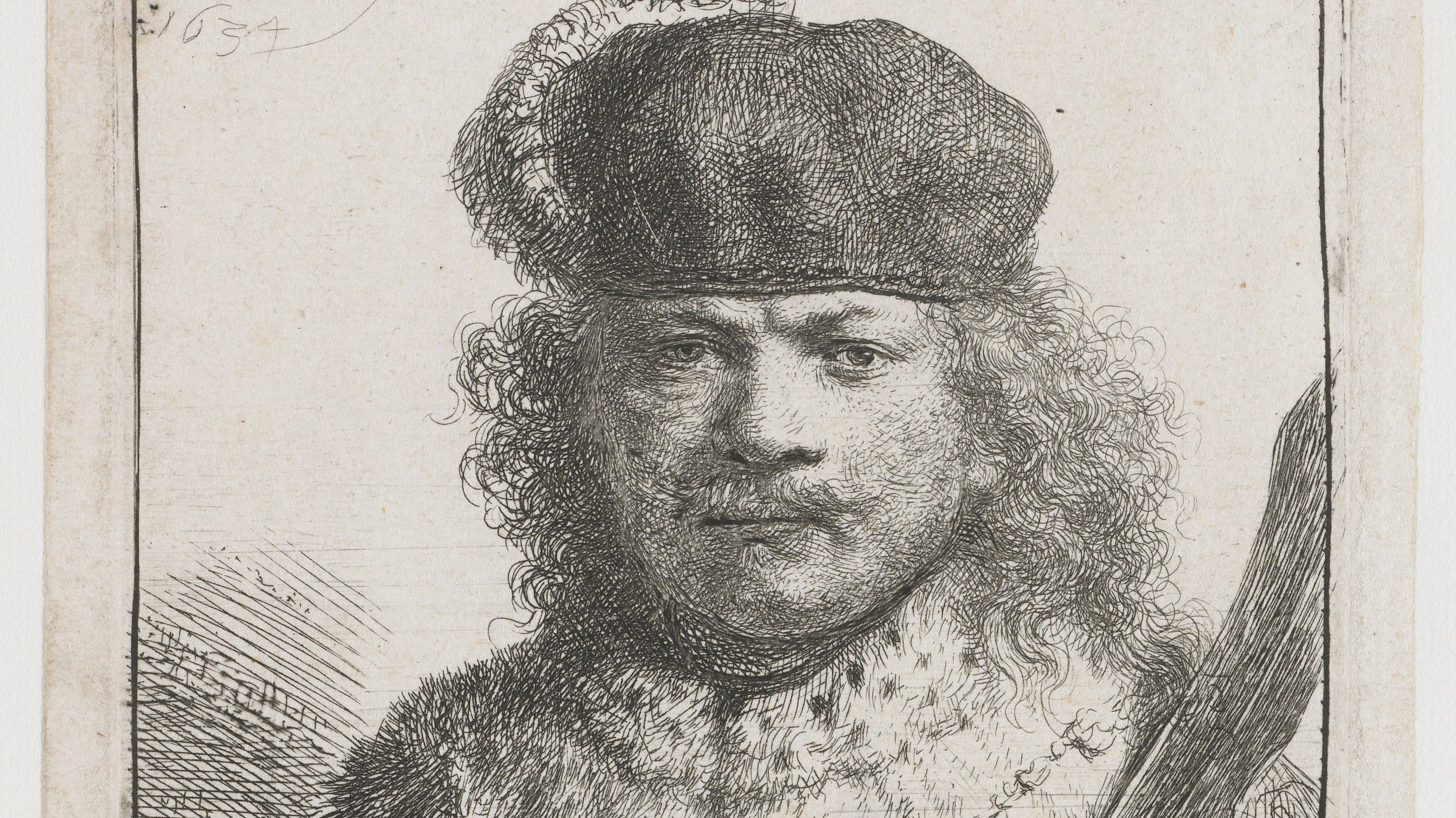