The Voyeuristic Universe of Peeping Tom

Being so popular abroad that your local roots are barely there: it happened to Peeping Tom. The performances of this Brussels company are made up of an unusual mix of hyper-realistic settings and physical surrealism, virtuoso dancers and local extras. The strongly associative composed productions resonate mysteriously with the subconscious emotional world of the audience. Time to take a closer look.

In 2018, Peeping Tom played all over the world, from France to Germany and the Netherlands, from Taiwan to Macao. When the company recently published a vacancy for eight dancers, there were two thousand-six hundred applicants from all corners of the world. After a selection of the submitted videos, the permanent staff and two choreographers brought over six hundred competitors for a meeting and further selection. This says something about the appearance of Peeping Tom. 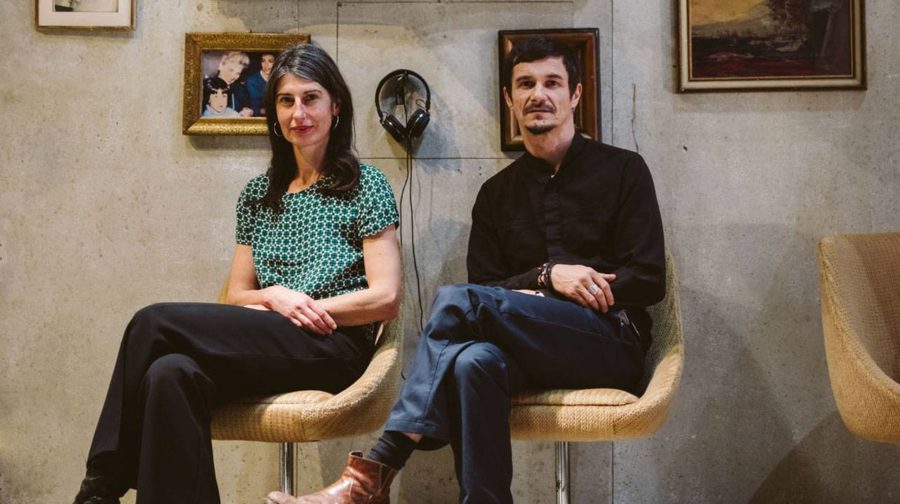 The two classically trained dancers, Gabriela Carrizo (Italy-Argentine – she also took contemporary dance lessons) and Franck Chartier (France) met each other in 1998 at les ballets C de la B during the performance Iets op Bach (“the little thing about Bach”) by Alain Platel. Performers of dance and exalted music were interwoven with the ordinary life and its misery. It was an iconic performance in which a number of big names in the performing arts debuted. Carrizo and Chartier also performed separately at Needcompany by Jan Lauwers, and the young dancer had previously worked with Maurice Béjart for several years. As a duo (they also became a real life couple), they are in a way concerned with the development of contemporary dance in Belgium. 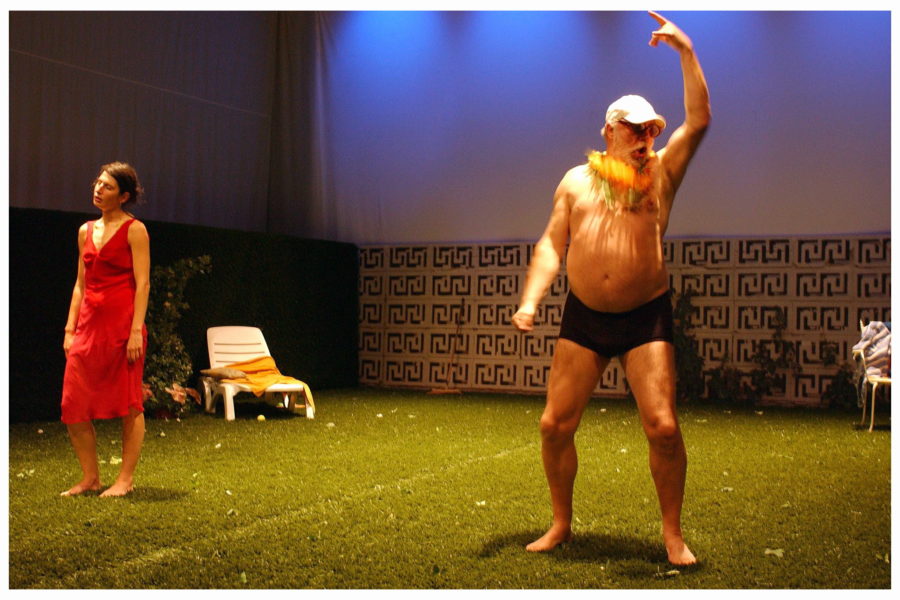 Peeking through the windows

In 2000, Carrizo and Chartier perform together for the very first time: Caravana, a location performance in and around a motorhome. From the outset, Eurudike de Beul plays and sings along, a mezzo-soprano that also plays a role in Peeping Tom’s latest production. Caravana’s audience peeps through the windows and is assigned the role of voyeur. This fact is reflected in the name of the company they start up together: Peeping Tom is a cult film from 1960 by Michael Powell about a serial killer who captures the last look of his victims on film (the expression “peeping Tom” also means “voyeur”).

With a variegated group of actors, dancers and unusual appearances (such as Rika Essers, an actress and singer of 86 centimeters in size, and Maria Otal, an eighty-year-old butoh dancer) they create a first trilogy: Le Jardin (2002), Le Salon (2004), and Le Sous Sol (2007). They gain international success. The setting is the scary seclusion of a family environment. The garden, living room and cellar are recreated in detail on stage. In the uncomfortable, but oh so recognizable reality of an oppressive family constellation, the hidden and unspoken aspects of each of the members are performed. Not so much with words, as with body language. Just as Freud saw the neuroses worked out in the patients’ physical symptoms; so the performers of Peeping Tom, with their winding waves and excessive actions, depict the hidden desires and fears of their characters. 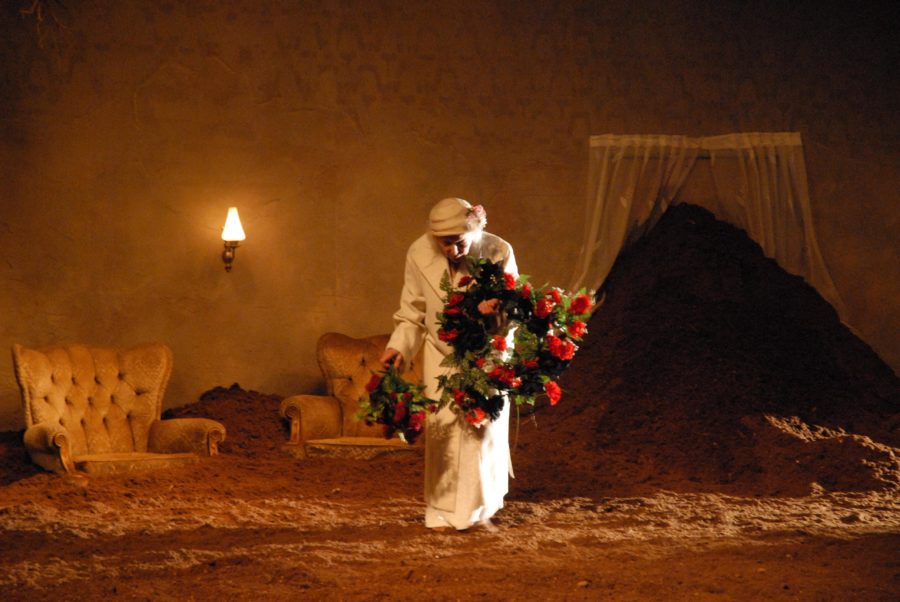 Peeping Tom’s performances are interspersed with virtuoso physical maneuvers. However, these are not gratuitous; rather, they are magnifications of what goes on inside the characters. Besides, the actors always perform under their own name – so are they still characters, or reflections of their own identity? What is certain is that their individual contribution to the creative process requires intense involvement.

The many outlandish situations and attributes also help to build up the bizarre atmosphere: while the father familias cuts his pubic hair in the living room, the young couple passes the baby (the real child of the dancing couple) on to each other while dancing, without even stopping kissing for a second. In the basement scene, the characters roam through knee-high, dark earth, while still celebrating their never-fulfilled dreams… The universe that the audience gets to see is familiar and strange at once, crazy but also just ordinary. You recognize something and despise it at the same time. That’s how it goes with subconscious images.

The inner comes out

Since 2009, Carrizo and Chartier are no longer on stage themselves, they are only directing from now on. 32, Rue Vandenbranden (2009) puts two mobile homes in an inhospitable winter landscape, and exposes the unrest in (love) relationships. Isolation and loneliness are the dark side of the desire to be loved. On stage, the boundaries between the real and the imaginary of that feeling are explored. In Peeping Tom’s performances, the inner life comes out in an uncontrolled manner, like a failure act or a slip of the tongue that disrupts normal life. Sounds and lighting help shape the oppressive atmosphere. With Nico Leunen, a well-known Flemish film mechanic, the choreographers introduce editing techniques into the trilogy. In this way, they construct the subcutaneous threat without an explicit narrative. In the Brussels KVS, I was able to experience how even booing adolescents in the audience became silent as a result.

Fortunately, every now and then humors break through as well. Peeping Tom wins (in 2015) the acclaimed English Olver Award with their performance. Later, Franck Chartier reworks the production for the dancers of the Göteborgsoperan in Sweden, under the title 33, Rue Vandenbranden. With 31, Rue Vandenbranden follows a new arrangement with and for the ballet of the opera of Lyon.

A Louer (For Rent) (2011) addresses the theme of transience: a fading but talented opera diva wanders around in an overwhelming interior and struggles with the expectations of a bourgeois environment. Nothing is certain or permanent (including the decor), except for her own recurring fears. Fearsome sounds highlight the insignificance of the characters. 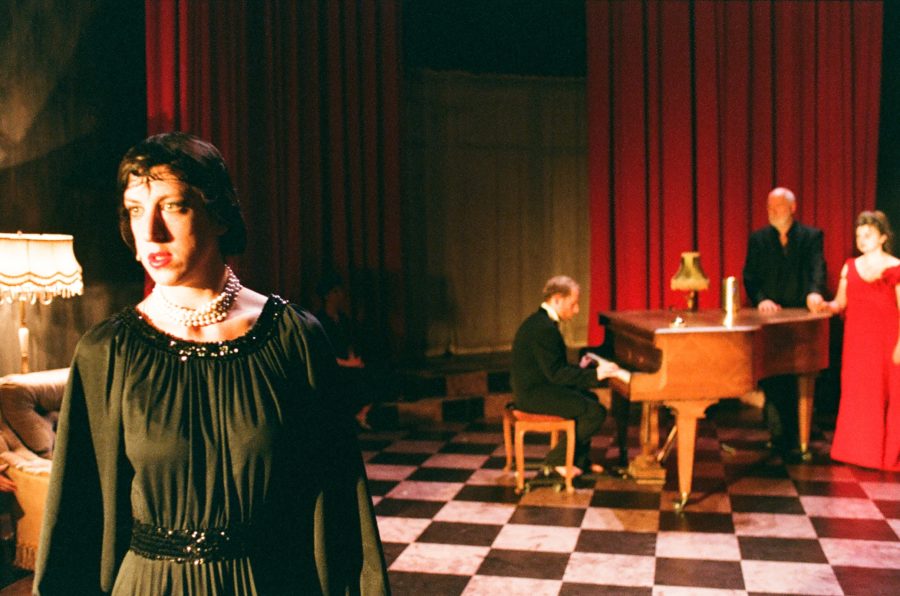 It is striking how Peeping Tom’s dance theatre is pervaded with psychoanalytic thinking. Jacques Lacan, a French psychiatrist and philosopher from the twentieth century, distinguished three orders in the way in which mankind is confronted with reality: the imaginary order refers to his desires and fantasies, the symbolic order refers to language and the real order is the brutal reality, which is inscrutable for our thinking.

Peeping Tom’s universe navigates between the imaginary, inner emotional world of the characters and reality

When you look at Peeping Tom’s performances from this frame, it seems as if the symbolic order is constantly being challenged. In Lacan’s case, symbolism stands for everything that is taught by our environment and culture. Language, in particular, we learn from others, not from ourselves, and that applies to a great deal of our social know-how: laws, customs, the roles we play in our lives. Peeping Tom’s universe navigates between the imaginary, inner emotional world of the characters and reality, with its hyperreal decors and organic, intuitive sequences: this is a reality that takes no account whatsoever of the characters. The symbolic is overgrown by imaginary fear, desire, aversion, hatred, etcetera, and by the intangible environment. An unstable inner world and an unstable outer world alternate.

In the second trilogy – Vader (2014), Moeder (2016), and Kind (2019) – these parallel worlds are played out even more strongly. Vader (2014), directed by Franck Chartier, is about a demented old man, played by Leo De Beul, the father of Eurudike. Before he played in A Louer, he didn’t have any previous stage experience, however, he was immediately noticed for his lively presence. The imaginary world of the eighty-year-old man and the boring routine of the old people’s home merge into one another – perhaps exactly as happens in the minds of demented patients. It is endearing how the company used a group of elderly people from the area where the play was being held: old Japanese or Portuguese were dancing along or sweeping the broom on stage... Filmmakers Mieke Struyve and Lotte Stoops made a documentary about it: Third Act (2009). The story, about ageing, is told from the perspective of the aging actors of Peeping Tom and the local seniors. 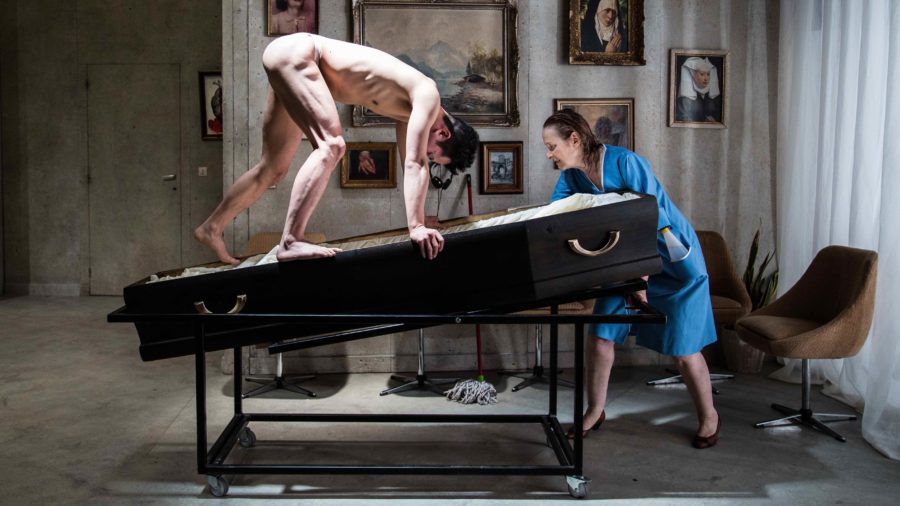 Moeder was directed by Gabriela Carrizo. Her play shows the mother as the body in which conscious and unconscious memories merge and collide. From the stream of individual memories of the performers, a universal memory shines through. Not just one specific mother, but The Mother is performed, with the many roles she fulfills and which are given a place in as many rooms: delivery room and morgue, recording studio and incubator, museum and private gallery. Cherishing and letting go, love and hate, control and madness: one does not exist without the other.

Characteristic for Peeping Tom is the way in which the scenography occupies a central place. The dancers first work with improvisations around the theme they want to deal with. There are always many attributes present, such as clothing racks, objects, wigs, etc. A (provisional) piece of music is often added. In the elaborate setting, the performers then set up compositions of which the order is not yet fixed. Everything is constantly filmed. In a third phase, the piece is cinematically edited. The different compositions sometimes create unexpected associations. During the editing, the sound, the music and the light are also worked on. A foley artist (someone from the film industry who creates sound effects using simple objects) has been called in for Moeder. He has to auditively amplify what happens on stage or evoke what is absent. Through the sound of liquid, they introduce the element of water, which for Carrizo is strongly linked to the mother. And they use the sound of cabbage that is torn to give birth. “The sounds made and amplified on stage express the memories of the characters,” says Carrizo in an interview.

For the latest creation in the trilogy, Kind, the two creators are working together again. The childlike universe turns out to be far from playful and innocent: untouched does not mean averse to violence and pain. The imaginary order of the childlike brain is perhaps passionate, unbridles, and gruesome... Kind premiered in April 2019, at the Théatre de la Ville de Luxembourg and will be running until June 2020. The Belgian premiere will take place on 17 October 2019 at the KVS in Brussels, and the piece will also be performed in Bruges, Kortrijk, Antwerp, Leuven, Ghent, Utrecht and Groningen. Older productions are also still being performed: Vader will be in Turin, Geneva, and Toulon in the autumn of 2019, and 32 Rue Vandenbranden will have his last performance in New York during that period.

Meanwhile, Peeping Tom is also artist-in-residence at the Royal Museum of Fine Arts in Antwerp, which is undergoing a thorough renovation. This will be an experimental long-term artistic research. Then there is also another new production on the agenda: At Sea (working title). The international premiere will be in July 2020, with the Belgian debut taking place in the autumn of 2020 at deSingel in Antwerp. At Sea is a revision of Adrift, a performance that they had previously created for Nederlands Dans Theater, which is a compilation of The Missing Door (2013), The Lost Room (2015), and The Hidden Floor (2017). It is quite revolutionary in the dance field: a production created for a ballet company returns in an edited form by a contemporary company.

Finally, Peeping Tom is once again working on its local roots: the company is moving from its current location in Molenbeek near Ultima Vez (the company of Wim Vandekeybus) to a new studio in the Gosset-building in the same Brussels municipality. This former Art Deco-style cigarette factory is located behind Tour & Taxis and also houses Jan Lauwers’ Needcompany. Here, Peeping Tom wants to house its own rehearsal studio, offices, and an atelier, and hopes to be able to develop the place into a creative space for dance (theatre), where other artists can go as well. The opening is planned for November 2020.