The Risk of Overtourism in the Low Countries

They turned up unexpectedly in Flanders and the Netherlands, too – the angry slogans in chalk and graffiti, on posters and banners, and even on T-shirts, urging tourists in no uncertain terms to pack their bags and go home. It seems that tourism is increasingly becoming more of a curse than a blessing.

Not that the problem is as bad as in Barcelona, Venice or Dubrovnik. There holidaymakers have for a while been the target of furious action groups, demonstrators and policymakers who want nothing more than to see the Golden Hordes clear off as fast as possible. Yet there is no denying that cities like Amsterdam, Bruges, Maastricht and numerous other places are groaning under the pressure of mass tourism. The figures back this up. In 2018 tourism in Bruges hit a new record of 8.3 million visitors, while Amsterdam clocked up close to 16.9 million overnight stays. Compared to 2017, that means a growth of 11.9% and 6.8% respectively. And what is more, the end of the steep curve is nowhere in sight. 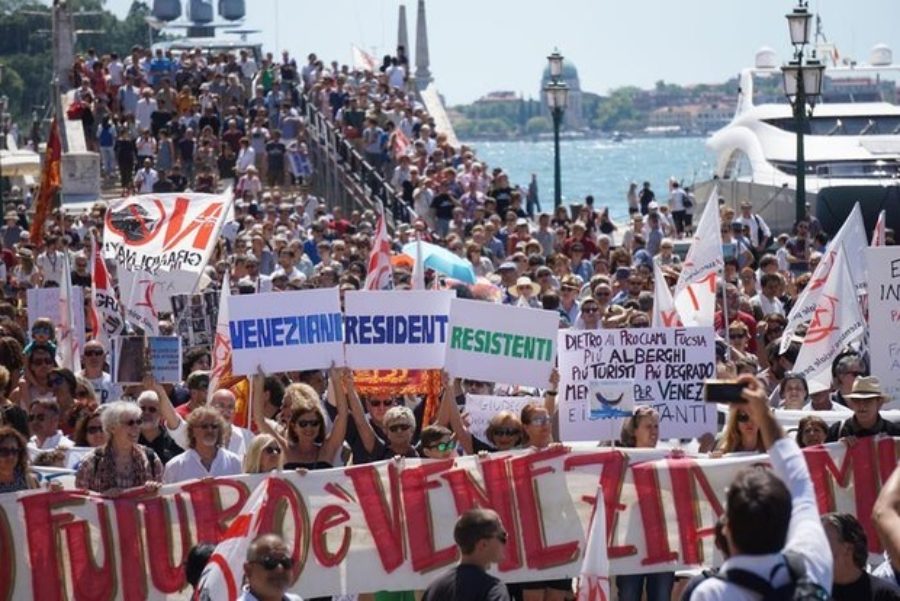 In a certain sense that is a blessing. Mass tourism creates thousands of jobs for people who make a living running hotels or restaurants, hiring out boats, working as tourist guides or selling souvenirs. It also brings in a tidy sum for the local council. In the tourism marketing of the Netherlands and Flanders, cities like Amsterdam and Bruges, but also Brussels, Utrecht, Antwerp and Maastricht, have become strong brands that work like irresistible magnets on both local and foreign visitors. 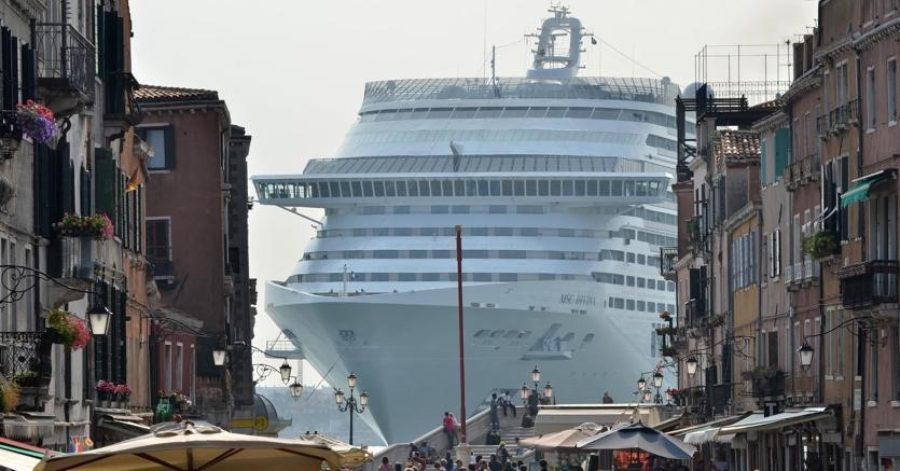 That used to be different. Until well into the 80s of the last century the coast, the Ardennes and the Kempen were considered the crown jewels of Belgium in terms of tourism, while the art cities trailed behind. Urban tourist services used to have to work hard to attract local and international visitors with colourful brochures and leaflets, posters, advertisements in newspapers and weekly magazines, docufilms, websites and other media. Art cities weighed in at barely 10% of Belgium’s national tourist product. 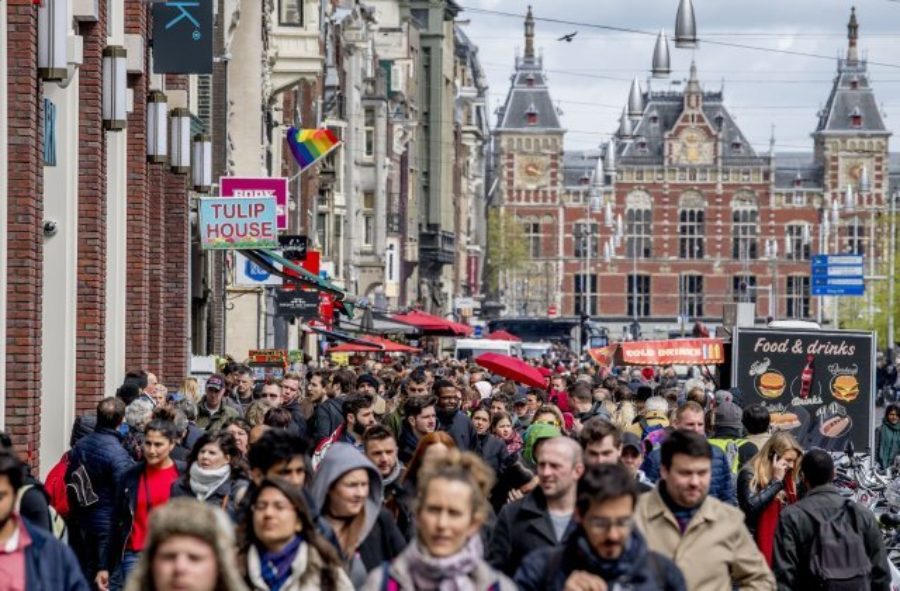 These days, however, the roles are reversed, and it is our cities that rule the roost when it comes to tourism. There is a whole range of reasons for this. Due to increasing prosperity and falling transport prices – look at the low-cost airline tickets from the likes of EasyJet and Ryanair – we have all become a lot more mobile in recent decades. In addition to a classic beach holiday in the summer and a skiing holiday in the winter, there is often enough money left over still for a short city trip to Barcelona, Venice, Stockholm or Tallinn. Besides that, we are increasingly opting for a romantic weekend in our own or our favourite neighbouring country. After all, with the Thalys, a return trip to Amsterdam, Antwerp or Bruges is really easy. On the other hand, our cities are also being “invaded” by British, French, German and Italian tourists who fancy a short break. Thanks to globalisation, there are also masses of Asian, American and Australian tourists who combine a day in Amsterdam or Bruges with a fleeting visit to other European cities. 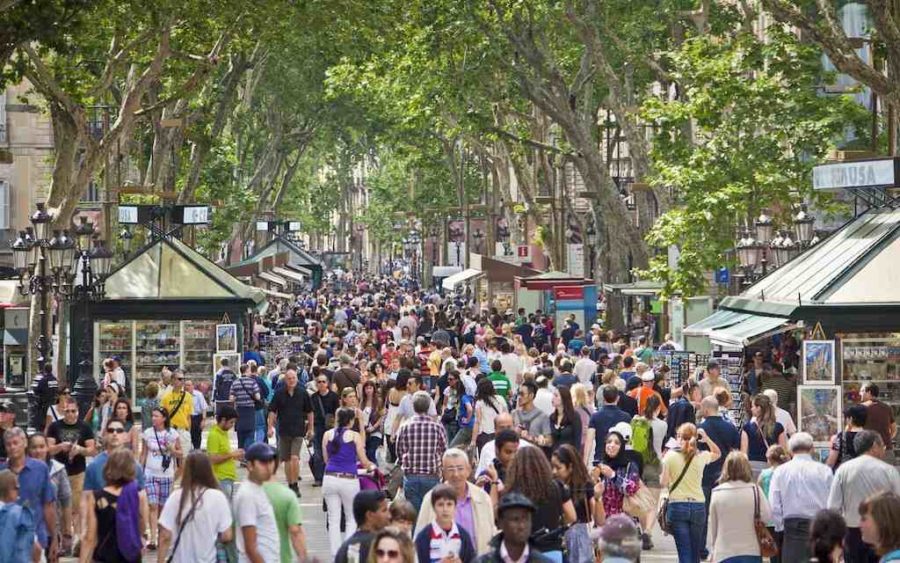 Mass tourism is not in itself a problem. It is only when the benefits of tourism no longer outweigh the costs that objections are raised. That phenomenon is called overtourism. Although the situation here is not nearly as out of control as in Barcelona, Venice or Dubrovnik, cities like Amsterdam, Bruges and Luxembourg are slowly but surely drifting into the danger zone. Because of the pressure of tourism, the prices of real estate and other consumer goods are rising rapidly, driving ordinary residents to the outskirts of these cities.

At the same time, the unpleasant busyness at iconic places in our cities like the Dam, Steenstraat or the Korenmarkt, where crowds of people fill the streets often from early in the morning till late at night, only increases urban flight. All the hustle and bustle make it hellishly tiresome for local residents to cycle to work, do their shopping or just go out for some fresh air. 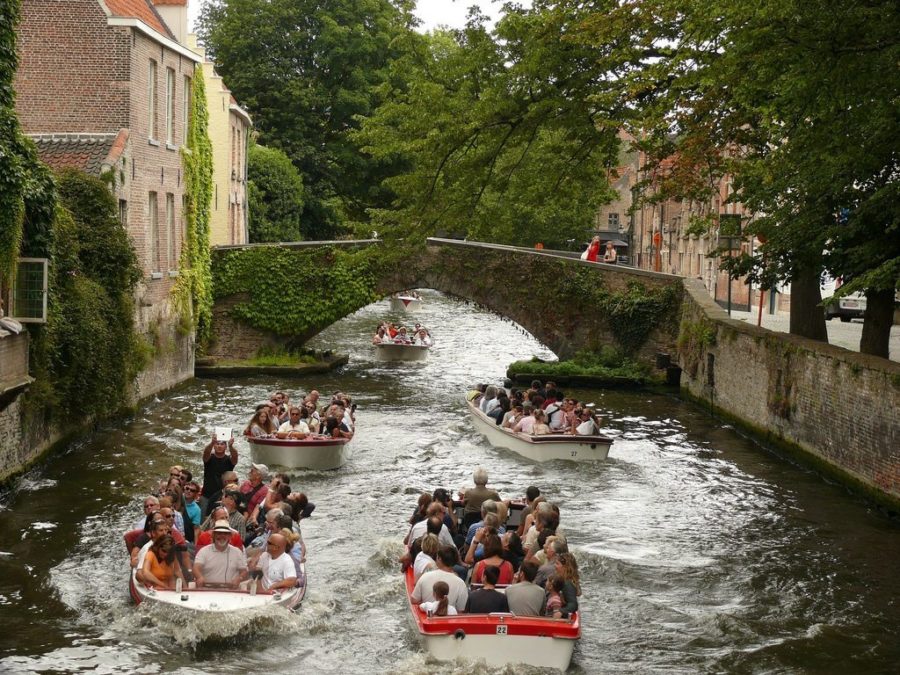 Mass tourism often causes a reduction in the range of local suppliers, too. In the centre of Bruges, you have to look hard to find an ordinary butcher, baker or greengrocer, because they have been forced out of the market by a monoculture of chocolate and lace shops. The same is true of Amsterdam, where the obligatory cheese and clogs shops are beginning to dominate the streetscape.

Local residents often no longer feel at home in their own city because of this touristification. That process of alienation is exacerbated by the nuisance tourists sometimes cause: the noisy beer bikes weaving their way through the streets, shameless bare-chested bachelor parties, people urinating in public – especially against the cathedral – pot smokers, litterers and other riffraff. Obviously this dystopian mix causes bad blood among local residents, who want redress from the local authorities. Mass tourism – especially the excesses of overtourism – must be curbed. 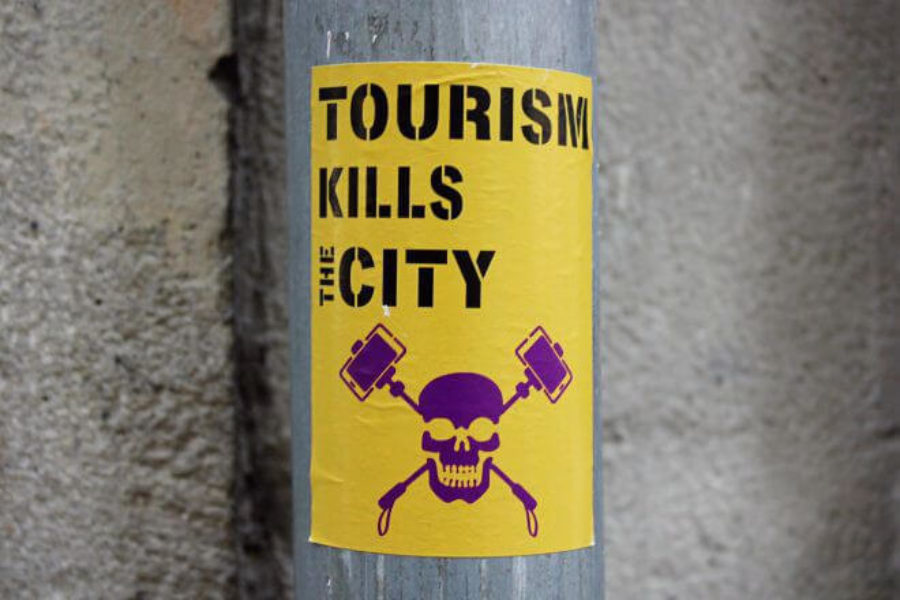 Slowly but surely our politicians are changing their approach too. Whereas, till into the noughties, local policymakers thought mainly in terms of unbridled growth, they are putting on the brakes now. In particular, an effort is being made to separate the wheat from the chaff. Day tourists – who are brought in literally in bus, ship and plane loads, but spend very little money locally – must be limited in favour of overnight tourists, people looking for added value and culture. That is the ultimate recipe, but it is not easy to get hold of the ingredients.

One of the possible strategies is demarketing. Bruges, for example, no longer wants to promote day recreation, so that the number of one-day tourists, i.e. those who stay in Brussels, Paris or elsewhere and plan only a fleeting visit to Bruges, will hopefully decrease. A second (magic) formula is spreading. Tourists are gently spread out over a larger area, so that the pressure on tourist hotspots is reduced. Amsterdam has been experimenting for years with this approach by diverting tourists, who inundate the centre of the city, to other less-visited places, neighbourhoods and attractions inside and outside the city. For example, Muiderslot, a medieval moated castle 15 kilometres from the IJ, is marketed as Amsterdam Castle to relieve the pressure on the centre a bit. At the same time, tourists are increasingly being directed to Haarlem to spend the night. 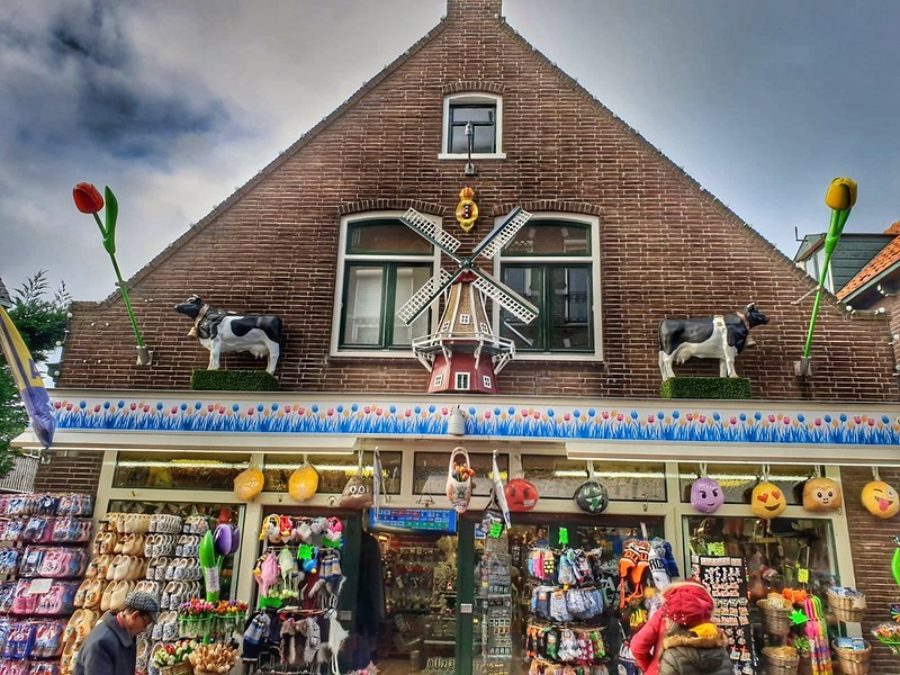 The disadvantage of this strategy is that overtourism risks spreading like an oil spill to regions and neighbourhoods where the touristic capacity is much smaller. That is a very real danger, given that a few well-aimed photos on Instagram and other social media can turn (apparently) banal places into tourist hotspots in no time.

Quotas are also part of the classic battery of measures. For years there has been a ban on new hotels in Amsterdam and Bruges, and the number of Airbnb properties is strictly controlled as well. Tourist taxes are another, similar measure. 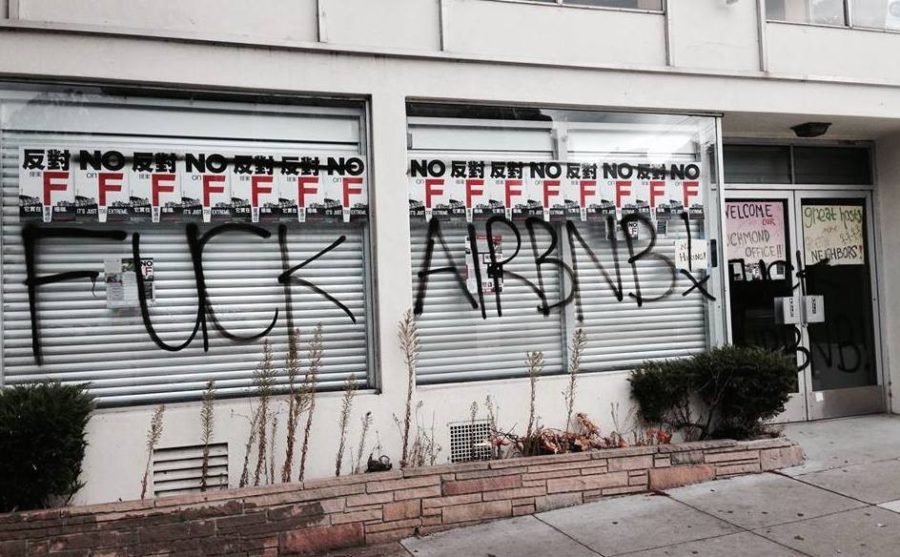 In the end though, it is a matter of speculation whether any of these measures will help, because tourism is spreading like wildfire. We are heading for an estimated doubling of visitor numbers in 2030. That is more than 30 million tourists in Amsterdam alone! Sometimes it seems that to turn the tide we need emergency measures like a numerus clausus, limiting the number of tourists in the city centre, a ban on cruise ships, or a moratorium on the expansion of airports, but that is unlikely to happen in the Netherlands or Flanders. Amsterdam, Bruges and Luxembourg are not (yet) like Barcelona, Venice and Dubrovnik, which are literally drowning under the pressure of tourism, so that radical interventions are needed. Nevertheless, Dutch and Flemish policymakers must definitely keep their fingers on the pulse and ensure that tourism does not turn into overtourism, leading to a massive and resounding cry of “Tourists, go home!”