Why Is the Far Right So Successful in Dominating Social Media?

The far right uses social media as a sort of pulpit from which to lash out without restraint against the left and society’s alleged excesses. The fact that they attract large numbers of followers as a result shows that they are more successful than their counterparts in playing on feelings that exist among the population. According to Hind Fraihi, the left needs to take a different attitude towards social media and the technology giants need to intervene more actively. ‘Those who make money from selling space for chat are also responsible for the sort of chat that is sold.’

Lots of lessons – both true and false – have been drawn from the elections of 26 May 2019. But perhaps one of the most important is that the resurrection of the far-right Flemish party Het Vlaams Belang is at least partly due to the way in which it used social media. The party spent a good 400,000 euros (more than all the other parties put together) on advertisements on Facebook. And they were not wasted. Where the party was hovering around the electoral threshold, it has now emerged as the second party in Flanders - the largest even, according to a recent poll.

But even without huge advertising campaigns (far) right parties, figures and ideas dominate Facebook, Twitter and other social media feeds. Research carried out on the Twitter debate in Flanders and the Netherlands, by the weekly news magazine De Groene Amsterdammer, the newspaper Algemeen Dagblad and the Utrecht Data School, shows that 51 of the one hundred most prominent Twitter accounts are (far) right-leaning. Another thirteen of them are right-wing conservative and only four accounts support a left-wing view of the world. 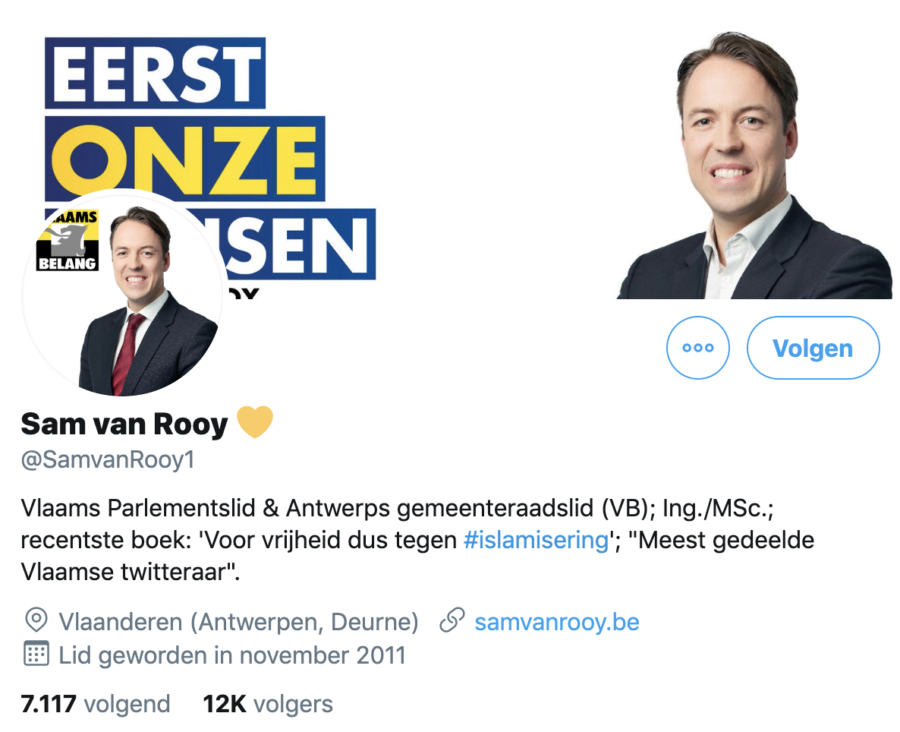 People have a tendency to see “the” social media as an amalgam of messages, video clips and photos. But that is incorrect. They actually form a vast landscape of highly diverse biotopes. Facebook is increasingly turning into a gigantic virtual billboard where both companies and political parties can deliver their messages to consumers unfiltered. Twitter, on the other hand, is a place where popular figures can spout their cleverly worded opinions in 280 characters, gathering followers and contacts in the process. In Flanders, the most visible Tweeter is the Vlaams Belang politician Sam Van Rooy; in the Netherlands (ex-)journalists Joost Niemöller and Wierd Duk are in the lead.

Twitter is the pulpit from which the far right can lash out, unmoderated and almost uncorrected, against the alleged excesses of our contemporary society

The popularity of figures like Sam Van Rooy, Joost Niemöller, Dries Van Langenhove, Jan Dijkgraaf and Jan Roos is rooted in their (alleged) claim that they shout out what the mainstream media do not dare, do not want or are not allowed to write. Twitter is where they vent their feelings, the pulpit from which they can lash out, unmoderated and almost uncorrected, against the alleged excesses of our contemporary society and the mess that left-wing politicians, academics and media have made of it.

The fact that they manage to attract unprecedented numbers of followers shows that they succeed in playing on feelings that exist among large sections of the population better than their counterparts do. Feelings of mistrust and fear.

Trust in governments, media and other former “establishments of trust” has reached an all-time low. According to the critical-scientific organisation SKEPP, conspiracy theories are rapidly gaining popularity under the influence of social media. However, the problem is that the content of such theories has become a good deal more dangerous. Believers’ absurd, far-fetched opinions about fake moon landings, chemtrails and who or what is being kept hidden in the famous Area 51 used to belong more or less to the realms of folklore.

These days, by far the most popular is what is now called the Eurabia theory, whose origins lie in the ideas of the Austrian philosopher Richard Coudenhove-Kalergi (1894-1972). He is probably best known for his assertion that the people of the future would be of mixed race; that today’s races and classes would gradually disappear owing to the vanishing of space, time and prejudice. As a result, he claimed, the Eurasian-Negroid race of the future, would look like the ancient Egyptians and the diversity of races would be replaced by a diversity of individuals.

In the twisted view of the far-right, this basically means that the Western elite is working on a plan to gradually eliminate the white population and to replace it with coloured people. Whether this occurs through ‘homeopathic dilution’ or ‘white genocide’ depends on the extremism of the adherents of these theories.

Not that Van Rooy and Niemöller (re)tweet this sort of thing explicitly, but they tread a very fine line - partly because of regulation by the providers. The social network sites use a number of algorithms to trace and destroy the most abhorrent posts. The fear of being blocked or even banned is acute amongst right-wingers. After all, it is about possibly losing their ‘means of venting’, their ‘political capital’ and their ‘revenue model’ in one fell swoop. 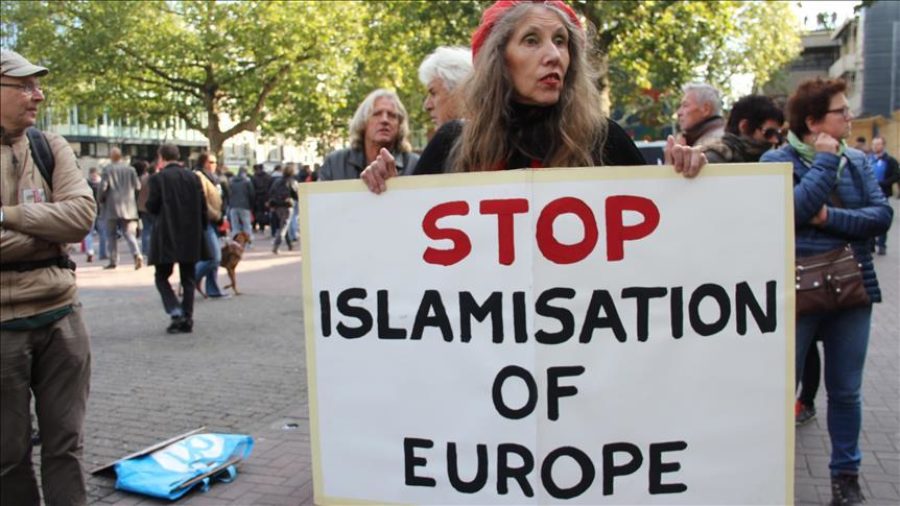 However, the algorithms are far from rigorous and can easily be side-stepped. Often the tweets contain apparently legitimate complaints about the degeneration of our social model. There are references, too, to issues that increase the sense of unease about our diverse society. And in the same breath, the author wonders implicitly and discreetly where these developments are leading. Well-known examples are tweets that translate as, "So what is #Islamization then?" or “#AwayWithUs”. Whether the tweets are about halal at school, soot-sweeping Petes or the renaming of the Golden Age, the tone is clear: under duress from what is more or less a gang of unsophisticated jihad-lovers on family tricycles, the native white population must relinquish cherished bits of ‘its’ customs, values, history and culture. Until in the end they are completely overwhelmed by infamous multiculturalism.

So, has the left wing lost the battle on social media? In 2011, Joost Niemöller wrote, on the right-wing website De Dagelijkse Standaard, that even furious people can live with democracy, but not with being ignored. That was actually a tip for left-wing parties and those thinkers who want to turn the trend around.

On the whole, the left reacts in two ways to the (far) right-wing domination of Twitter and Facebook. Some withdraw into the fortress of their own ‘correctness’. Sticking together in closed groups, they talk disparagingly of the ‘stupid right’ or the ‘Flemish underbelly’. Others enter the battle and fight epic flame wars with whole hordes of right-wing trolls, ‘fascists’ and other ‘brown scum’. A sort of keyboard Lord of The Rings. Both ways are counterproductive. Talking about opponents with unconcealed contempt or hostility has never made anyone change their opinion. On the contrary, it just adds some extra barbed wire and reinforced concrete to the reciprocal hedgehog positions.

Recently quite a lot of left-wing Tweeters have opted for a so-called Third Way and left social media (with or without much show). However understandable this may be in some cases, it contributes nothing to the creation of more balance. As the recent elections showed, Twitter and Facebook now offer far too much potential for conquest to completely ignore them.

Feelings Are Facts. It is a huge cliché, but there is a core of truth in it. Yes, there are notorious racists whose life view has got stuck somewhere between the 19th century and the 1930s. But the majority of the (far) right-wing in Flanders and the Netherlands consists of frightened people who see their world, their future and their certainties threatened by a world that no longer understands itself. Don’t laugh away their worries and don’t demonise them. They need understanding, dialogue and, finally, someone who is concerned about them (again). 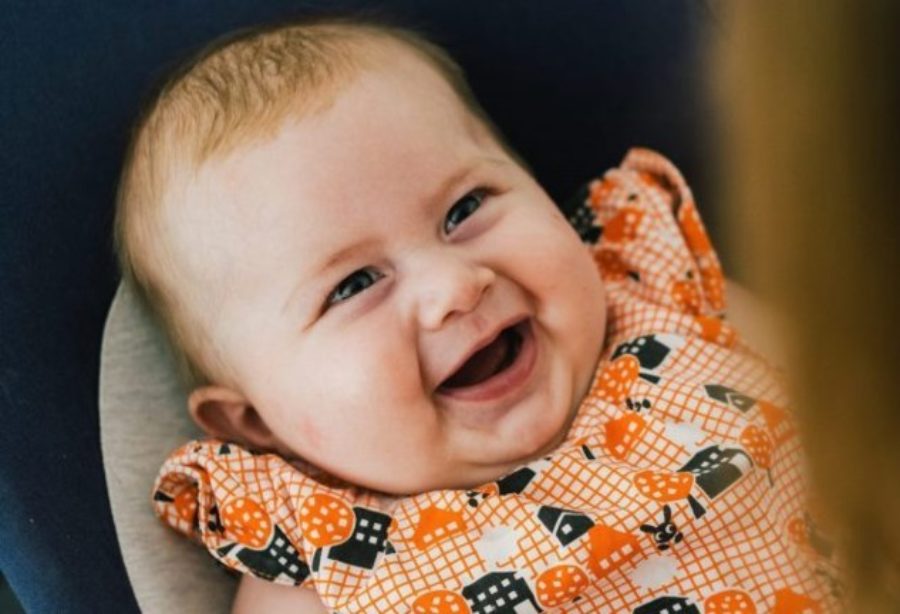 Should we get rid of the social media? Given the unadulterated hysteria that sometimes prevails there, it is quite a tempting idea. But then we would be depriving ourselves of their power to mobilise, which can be used for positive purposes too. Take baby Pia from Wilrijk, for example. The toddler was born with spinal muscular atrophy (SMA), a very rare genetic disorder whereby the muscles barely work and become increasingly weaker. Only the most expensive medicine in the world, Zolgensma, could save her. All that was needed to improve her life was just one injection, but unfortunately the pharmaceutical company Novartis charges 1.9 million euros for that injection. After an intensive campaign in the regular and social media, a good 972,000 text messages were sent. Enough to cover the costs.

We don’t need more Pias, but that is a different story. What we do need is more positivity on social media. That and the political and social courage to demand far more active interventions from the technology Molochs in Silicon Valley. Filtering nothing but the vilest chats with a minimum of investment ought not and cannot be enough for a business that makes billions. Those who make money from selling space for chat are also responsible for the sort of chat that is sold.

Anyone who has ventured onto social media recently can quite quickly feel like they have ended up in a virtual psychiatric institution. In the hysteria department. Memes of nazis and Hitler are being shared left, right and centre to denounce the (non) policy of the new Flemish government. That is too easy and counterproductive. A debate such as this, about the future of our social model, deserves to be conducted with arguments.