With Eddy Merckx to the Moon

Nearly every Belgian who lived back then will remember the atmosphere that hung in the air on 20 and 21 July 1969, fifty years ago. History was written twice within the timeframe of two hours. Eddy Merckx won his first Tour de France, a few moments later the first man set foot on the moon. The parallels between the two missions are remarkable.

In the 1960’s there was a firm belief in unbridled progress. A man on the moon? It’s possible. The chances that it would happen were calculated in Belgium and abroad; they were to be greater than the possibility that a Belgian would ever win the Tour again. 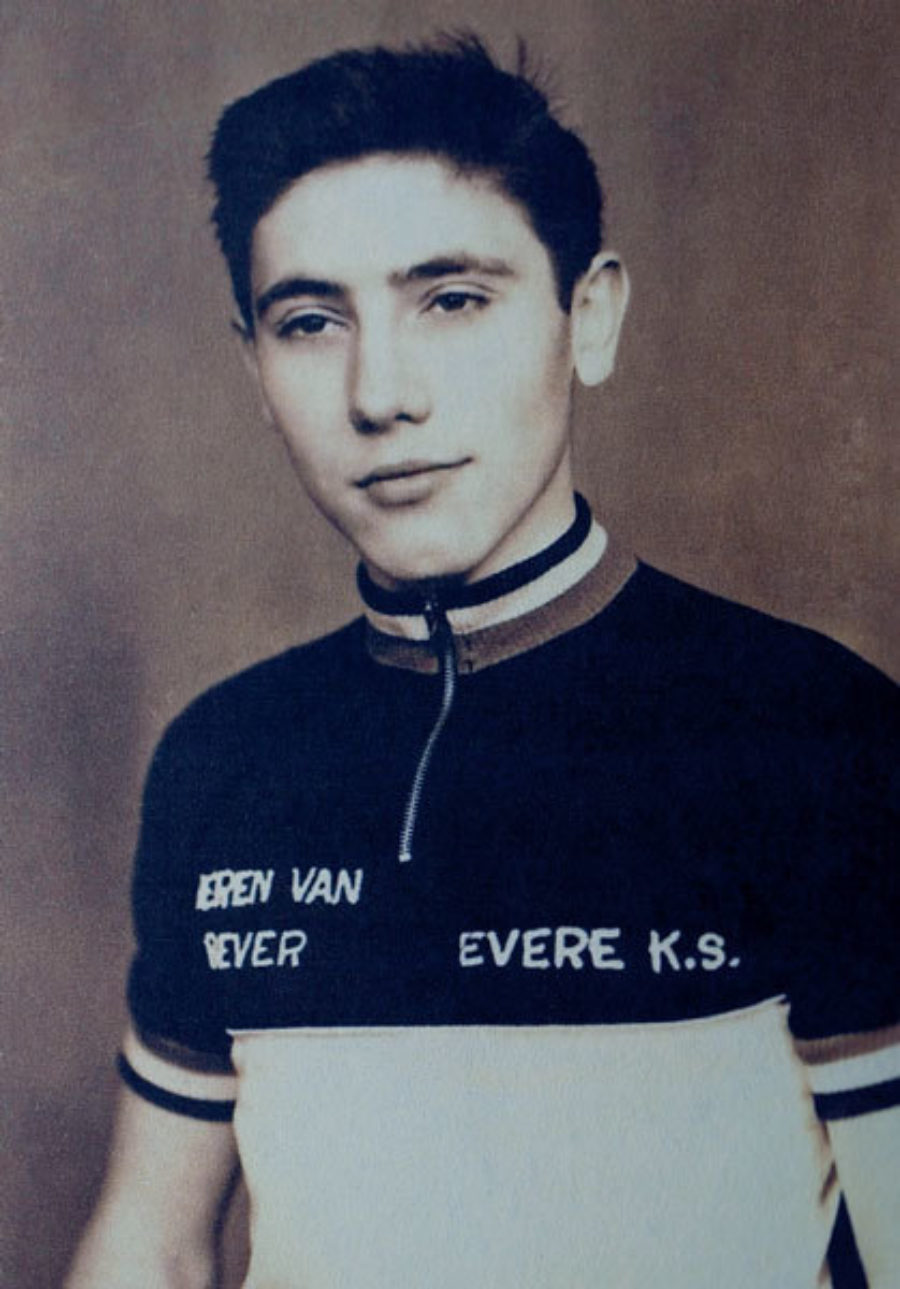 When the fable that man would never be able to escape earthly gravity was broken, mankind became moonstruck. President Kennedy finally rang the bell when he launched the lunar program on 25 May 1962.

In the same month, a man named Eddy Merckx, then sixteen years old and living in the municipality of Woluwe-Saint-Pierre in Brussels, decided to become a racing cyclist. His big dream was winning the Tour.

On 17 July 1961, Merckx was competing his first race with youngsters. Three years later, at Sallanches, he became world amateur champion. In 1965, he made his professional debut at Solo-Superia and immediately left his mark. With his first Giro participation in 1968, he commanded the race and led the competition through the high mountains. The Tour dream began to take shape. 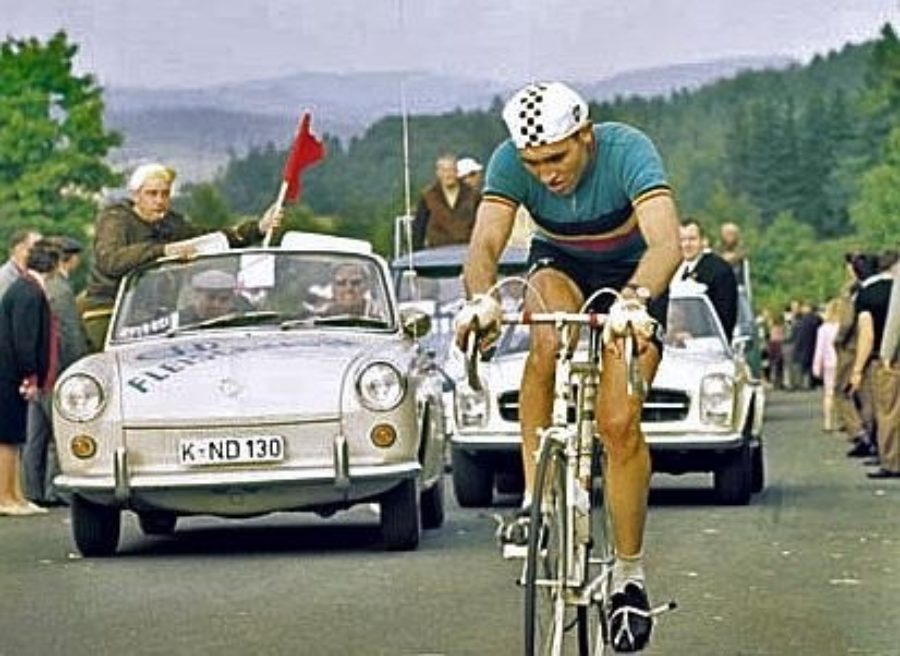 Near the end of the 1966 World Road Race Championship at the Nürburgring, Germany and Eddy Merckx heads for 12th place © TAimages / Brian Townsley 2006

From 1903 to 1939, 12 of the 33 Tour editions were won by a Belgian, with Sylvère Maes being the most recent winner. But after the Second World War, results were extremely disappointing. The Tour of 1968, in which Herman Vanspringel had to hand in the yellow to Jan Jan Janssen in the ultimate trials, caused ultimate frustration. Would Merckx be the great savior thirty years after the last Belgian victory?

The race in space between the United States and the Soviet Union erupted in October 1957, when the Russians fired their first satellite. The round that Yuri Gagarin circled around the earth in his Sputnik in 1961 confirmed Russia’s lead. 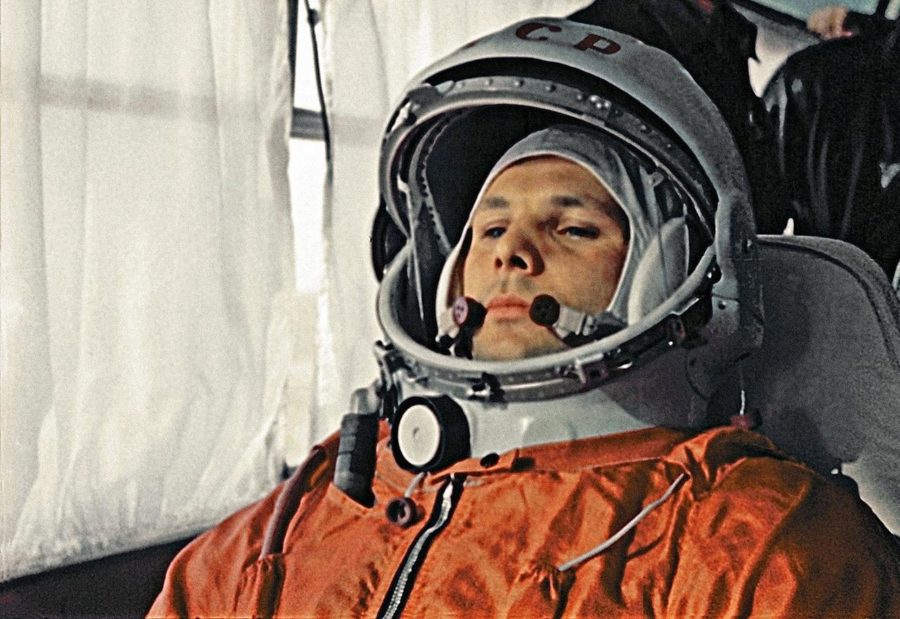 President John Kennedy realized that it couldn’t go on like this any longer, as he had a hard time after the failed military invasion in the Bay of Pigs in Cuba. On 25 May 1961 he predicted ‘that the Americans will land a man on the moon before the end of the decade’.

How do you realize a dream? By working hard, passionately believing, and leaving nothing to chance. Inspiration, combined with liters of perspiration.

The American Gemini-program was for the moon mission what the Giro of 1969 had been for Merckx: a necessary practice. However, in both preparations things almost went wrong. During a ground test, the Apollo 1-cabin burned out. Three astronauts died. In the Giro, Merckx was caught on doping, resulting in a suspension.

The moon and the Tour seemed further away than ever.

In May 1969, it looked like Eddy Merckx was heading for the Giro’s final factory, just like a the year before. After a positive drug test in Savona on June 1st, he was disqualified from the race and suspended for one month. He could forget about the Tour. Only after a lot of pressure, the sanction was lifted. His great tour adventure could still begin. 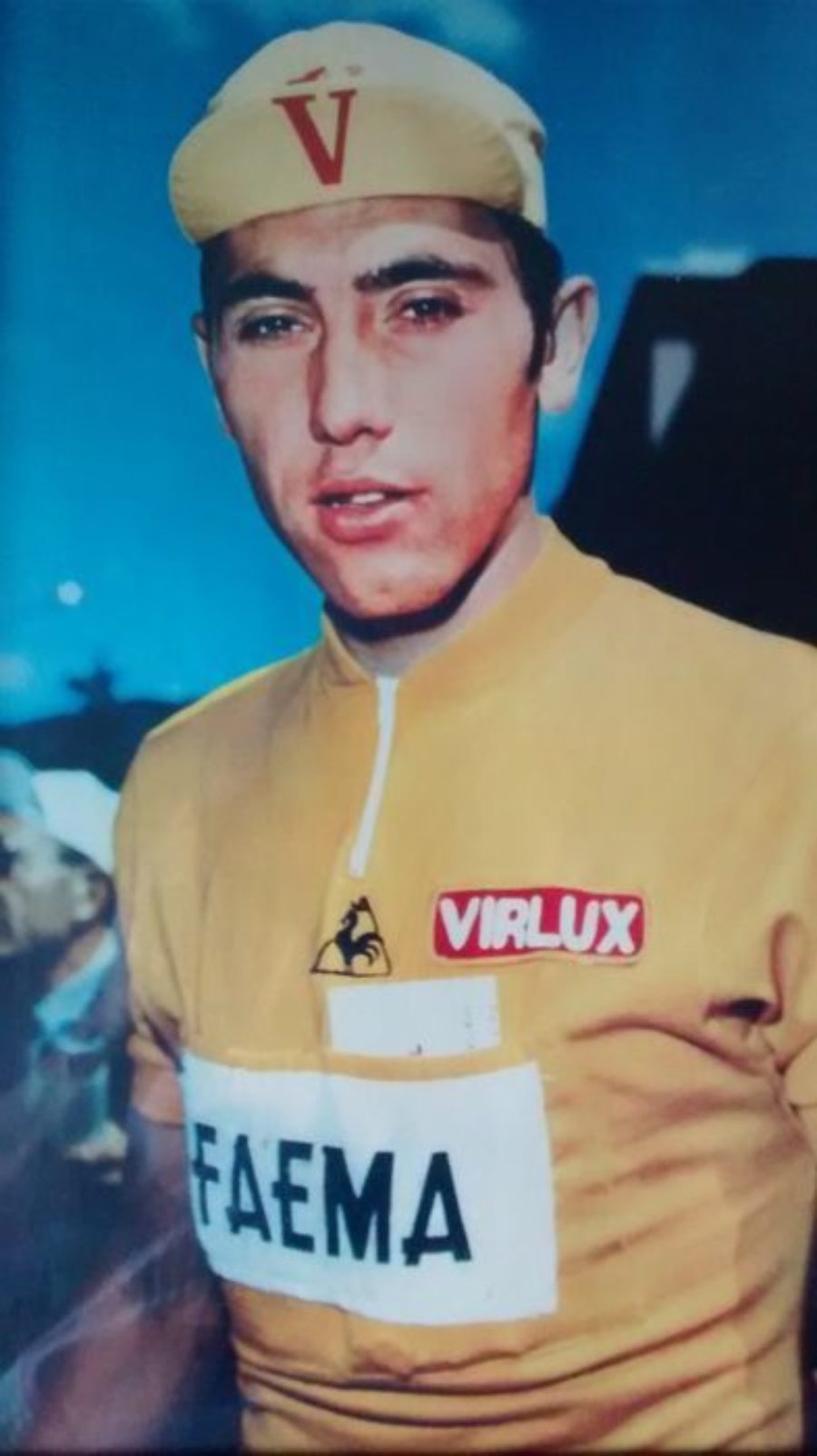 Some rivals weren’t too happy about the ‘preferential treatment’ that Merckx had received. Furthermore, the established order wasn’t waiting for an ambitious young man, who, according to them, couldn’t lean on the support of his team.

The Tour de France of 1969, 4,117 kilometers long, without a day of rest, was something for resilient, experienced men. A calves killer with Vosges, Alps, Pyrenees, and Massif Central on the menu. It was the heaviest edition since the Second World War and to top it all off, tropical weather was predicted.

It was not until February 20, 1962, more than a year after Gagarin, that the first American flew around the earth: John Glenn in Mercury 6. Next, the NASA set up ten Gemini-flights in rapid succession. Each time a countermove from the Soviets followed, which rushed the Americans even more. On January 27, 1967, things went wrong. A rehearsal on the ground with three astronauts on board caused a fire in the Apollo 1-cabin. The pure oxygen increased the flames; fourteen seconds after the fire alarm went off the three astronauts had already suffocated. A catastrophe!

Only after a year of interruption, new Apollo flights started to take off. First unmanned, but from Apollo 7 and onwards with astronauts on board. With the lunar lander of the Apollo 11 another catastrophe emerged: the computer system failed, the Eagle narrowly avoided a few high mountain peaks on the moon.

Preparations had been made. The nerves were on high, but there was no turning back. The cynics were exceedingly bitter. But they were all too aware of the fact that in such companies, an accident can take place at any time.

While the Apollo-mission was undergoing the very last tests, the 56th Tour de France had begun on Saturday 28 June 1969. Tour debutant Merckx was the all-time favorite. He quietly moved - by bike! - to the start in Roubaix. What had he got himself into? The opposition came out in great numbers and was fierce, tempered by the sting of defeat.

With similar excitement, Neil Armstrong, Edwin Aldrin and Michael Collins were heading for the giant Saturn V-rocket, which would shoot them to the moon, on July 16. Their heartbeat peaked as they removed themselves from the launch pad at Kennedy Space Center at 9:31 local time by a deafening roar. Would they ever return to Mother Earth?

Merckx had to immediately give up his dream of riding into Belgium wearing the yellow jersey: during the opening ride Rudi Altig was seven seconds faster. But from the Vosges and onwards, he put the cat among the pigeons. His opponents suffered an all-time high humiliation at the top of the Tourmalet: Merckx broke away and successfully completed a solo of 140 km. He couldn’t escape the final victory, or could he? Merckx stayed on his guard. “I’m afraid of an accident”, he said. “One careless spectator can make me lose the Tour - inside, I’m hyper nervous.”

In the final ride he was terrified: after the start he missed the first corner, ended up against a fence, but fortunately stayed straight. Would everything go wrong on the home straight? 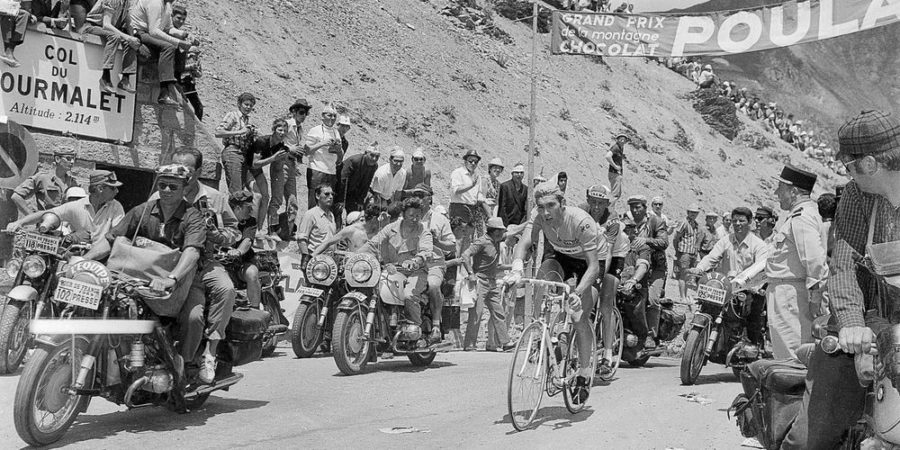 With an overwhelming noise, the rocket came loose from the platform. Ten minutes later, the speed had already risen to 28,000 km/hr and the rocket was heading for the moon. Along the way the lunar lander had to be brought into position, which was the second crucial phase of the mission after its launch, flawlessly executed by Aldrin.

Three days later Armstrong and Aldrin disconnected the lunar landers from the Columbia in which Collins stayed behind. As they descended to the surface, everything went smoothly, until the two astronauts noticed that the computer was sending them to a place full of boulders. Armstrong took over the control manually. However, they were running out of fuel. ‘One more minute, otherwise you can’t go back’, Houston said. Armstrong’s heart rate was rising to 160 beats per minute.

What goes through a man when he stands on the Tour stage? Or on the moon? Is there emotion, goose bumps, a lump in the throat? Or is the dimension of what has been achieved incomprehensible?

On Sunday afternoon 20 July 1969, Eddy Merckx set foot on the podium in the Parc de Vincennes in Paris. He was officially honored of his Tour de France victory. He had reached heaven on earth. 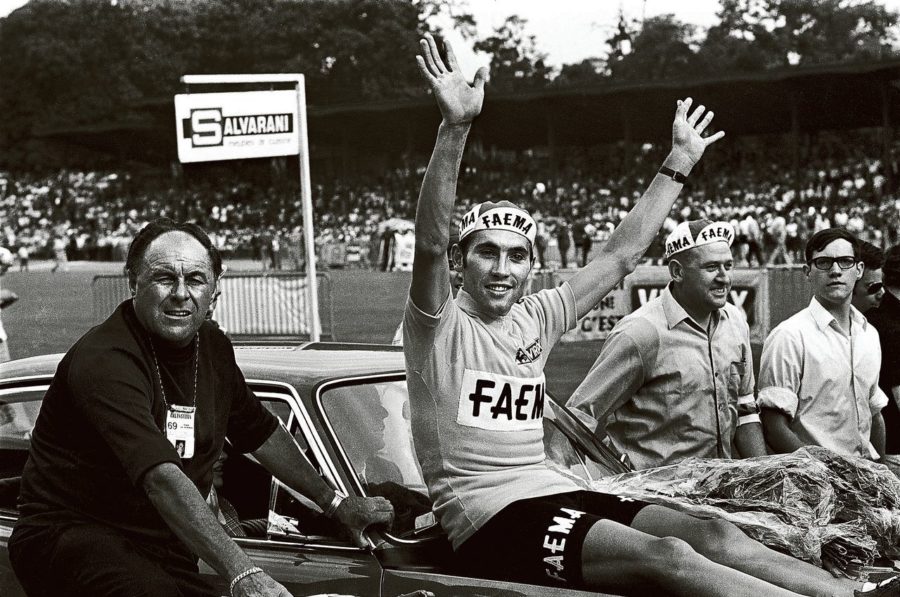 The velodrome of Vincennes: Merckx has just won its first Tour, on 20 July 1969 © Presse Sports

In the early mornings of Monday 21 July, Neil Armstrong put his left foot down on the moon. “One small step for a man, one giant leap for mankind”, are his immortal words.

Does heaven also exist on the moon? 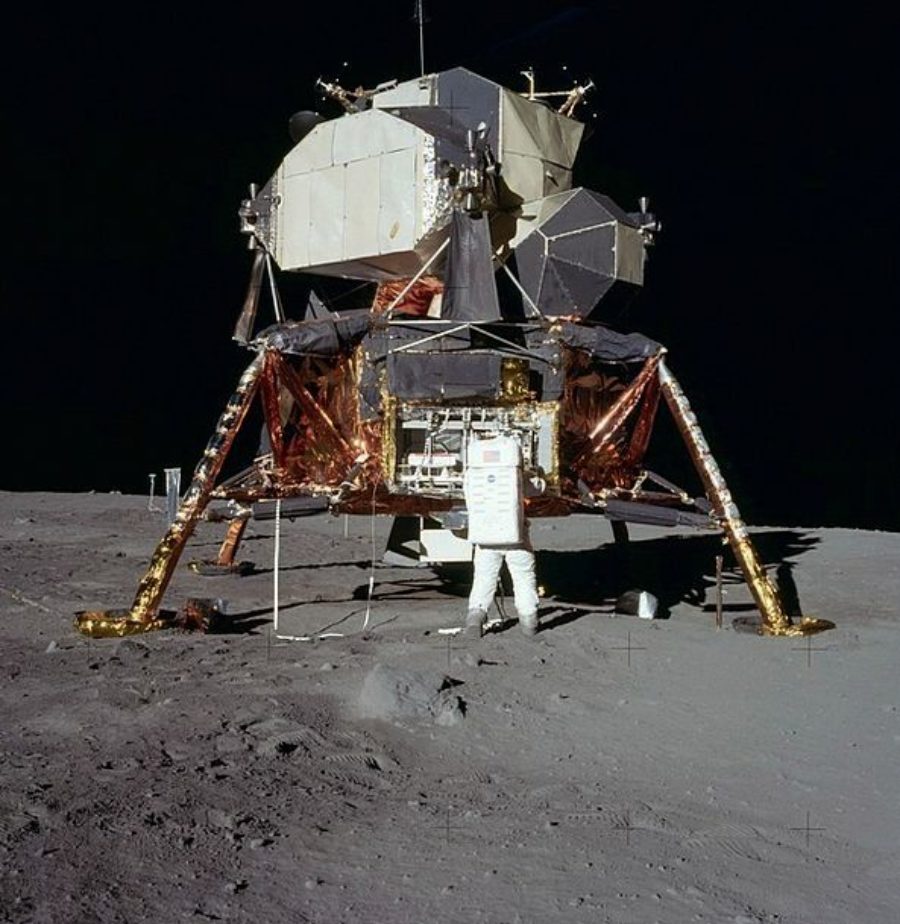 Does heaven also exist on the moon? © NASA

Eddy Merckx was sent in the wrong direction in the last kilometer, but finally rushed down the roads of Vincennes with relief, under the cheers of thousands of Belgians who had come to Paris to experience this historic moment. Sunday 20 July – 17h26’14”, a few hours before the start of the Belgian national holiday. Merckx stepped onto the modest stage and put on the ultimate yellow jersey.

A wave of enthusiasm flooded the crowds. The greatest of all time left his mark. A legend was born. His return to Belgium was an historic event, with his reception at the Royal Palace in Brussels as one of the highlights. 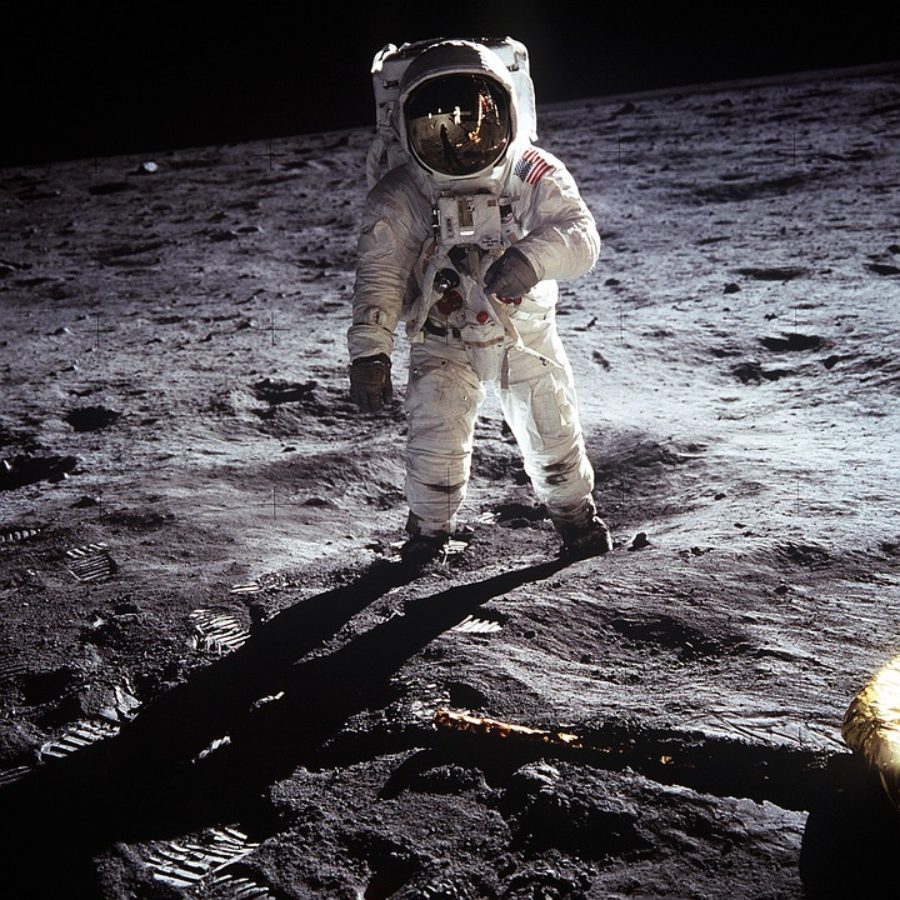 Buzz Aldrin, the second man to set foot on the moon. © NASA

Six hours later Neil Armstrong buckled down his ‘backpack’ with oxygen bottles and a radio emitter. Only nine steps on the ladder separated him from earning a place in the annals of world history. Next, civilization experienced an unbelievable moment: the camera captured a person who gently descended to the surface of the moon. Six hundred million people from all over the world were watching. Just a little longer and ...

Monday 21 July – 03h56’20” “our time”: Neil Armstrong pressed his foot in the lunar dust. The most memorable step a man has ever taken. Twenty minutes later, Aldrin followed. A legend was born.

A few months later, Armstrong, Aldrin and Collins were also received at the Royal Palace in Brussels. 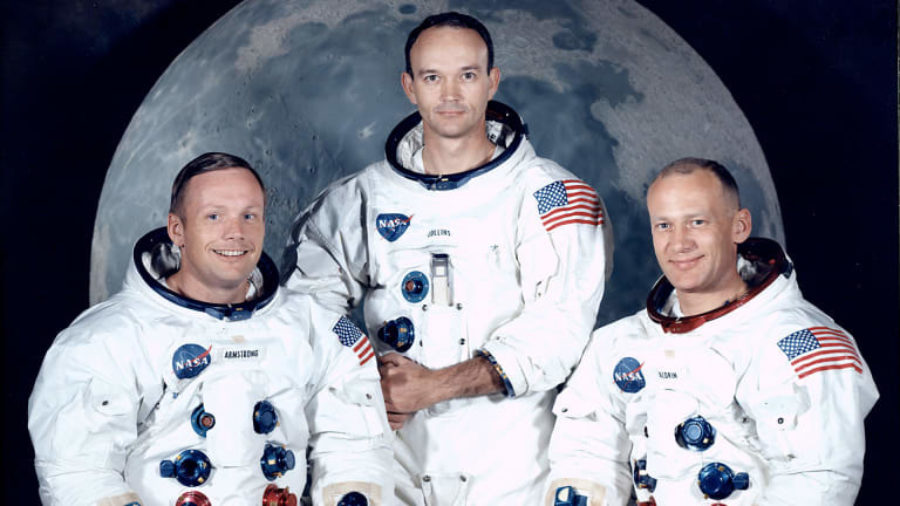 former director of the Centre Tour of Flanders in Oudenaarde.
former editor-in-chief of Het Nieuwsblad